we are all One somewhere in space in time, meanwhile ... 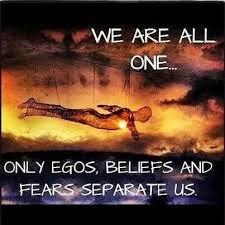 Some years ago, the Key West City Commission recognized "We are all created equal members of One Human Family" as the city's official philosophy. Living it was a bit more challenging.

Yesterday's silence in the face of evil is evil itself post featured conversation with Vermont amiga Paula, whom I met in the fall of 1987 in Boulder, Colorado, where we took the Hakomi body psychotherapy training described somewhat yesterday.

If we are really all one (One), then any aggression against another, whether mental, emotional or spiritual, would affect ourselves. This would line up with the Karma theory I believe. I agree about monsters however. I feel there is a spell or something trying to strangle our world, but I have to trust that I am connected to spirit and Light and Love are most affective in spiritual combat. Maybe we all have our own magic power. Like the game, Magic, we get to play our hand as best we can and as we see fit. I agree with you. We can not surrender to monsters. I trust that I am in the correct place at the right time. Enjoy the show?? 😀 And laugh as often as I can at what I am seeing ..... And breath deeply. Awwww!! I feel perfection is right around the corner for me!! hahhahha Did you look up the book? There are several videos of readers on line. I loan my book out often to people who are struggling.
Me.
In the sense we all are part of God (or whatever started everything), we are all One. That is well summed in the poem last below, which fell out of me in the spring of 1994. However, I think it might be a while, or never on this planet, for humanity to become One.

Meanwhile, I think each person has to do the fearless and searching self inventory, which for me was driven in large part by angels and was not fun.
I told our Hakomi teacher Pat that Hakomi seemed allergic to the word, God. That Hakomi practitioners should give their clients the God probe: "What do you experience when you hear me say the word, God?" Pat said that would be too violent, because most people are really hung up about religion. I said the God probe, therefore, would cut to the chase a lot quicker.
I bumped into our Hakomi teacher Lucky several years later and we visited in a coffee shop. He said he was seeing a local psychiatrist, who was Buddhist. An American, white psychiatrist. Perhaps involved in the local Buddhist temple, that I don't know. Lucky said, at the end for their first visit, the doctor said Lucky was the best psychologically put together person he had ever met, but he had no relationship with God, and if they were going to work together, that would be where they worked. Lucky said it was challenging, but he was making progress.
I told Lucky a bit about God leaning hard on me, dark night of the soul and such, and it didn't seem Lucky grokked it. Eventually, he asked me if I was having any fun? I said, not much. I thought he had a bit more to learn about God. As do we all.
Earth,
the sacred prism
though which souls are refracted
into their elemental parts,
purified in Holy Fire,
then one-forged and sent on their way
to not even God knows where,
simply because they are all
unique emanations of God,
evolving ...
I did not look up the little book, my dreams last night pointed me strongly toward dealing with the monsters and their allies as I had been trained to deal with such. Two blog posts in that vein. One included your and my discussion yesterday, the other can be reached with this link: soular radiation is a bit different from Los Alamos variety