Trump and his legions, and Republications who are with them, made the Pledge of Allegiance a joke 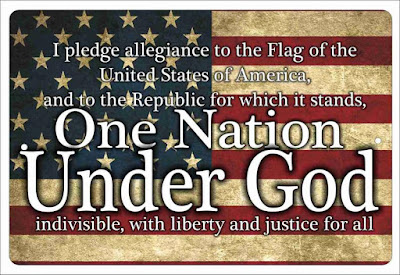 Florida Keys Democrat amigo Larry wrote of Derick featured in  yesterday's Lucifer loves the Republican and Democrat finger pointing, as opposed to dealing with the beams in their own eyes:

This Derik guy is really misinformed!

Derick sees what he wants to see.

Derick, are you blind and deaf or just incapable of understanding that America first means leading the world not retreating from it and in our own country taking care of all our citizens.

america first was a slogan Trump ran on. What he meant by it and what Republicans mean by it is that we put America's interest first. Not one dollar should be sent elsewhere until all of America's needs are taken care of first. We need help in this country and im sick and tired of watching democrats try to help everyone else out while America gets screwed financially. Look at the debt Biden has accumulated since he took office. Look at the covid relief there trying to pass. Only 30% goes to covid relief, all the rest goes to offtopic resources for other countries. Funny how bidens slogan is America last, how could someone even win the election when they flat out said that America will be taken care of last. All the policies that he has made or gotten rid of. Worst first month of any president in history by far.

The way I see America first is, Americans first take the beams out of their own eyes, then they will see clearly enough to be under God, as they claim in the Pledge of Allegiance. Under God was not in the Pledge I learned in grammar school. It was added to differentiate America from Godless communism. As if America had any say in what, or who, is under God. That's God business. I'd love to see your proof that 70 percent of of the covid relief bill goes overseas. The worst month of any president's time in office was January 2021 - the guy you back. The only president to attempt a coup, incite a riot to take over the Capitol, stop Congress from certifying Joe Biden beat the guy who wanted to be King, claimed to be sent by God, he won by a landslide, the election was rigged. Trump and his legions, and Republications who are with them, made the Pledge of Allegiance a joke.

Trump did pretty well in his first month. Lowered the national debt by 12 billion. As Biden has risen ours 200 billion.

Amazing how people compare Hitler to Trump. But look at the picture, Hitler and Biden have way more in common 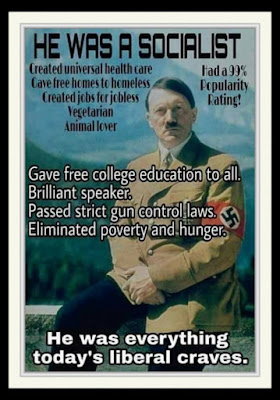 Derick, How much did the national debt rise during Trump's 4 years?

One of President Donald Trump’s lesser known but profoundly damaging legacies will be the explosive rise in the national debt that occurred on his watch. The financial burden that he’s inflicted on our government will wreak havoc for decades, saddling our kids and grandkids with debt.

The national debt has risen by almost $7.8 trillion during Trump’s time in office. That’s nearly twice as much as what Americans owe on student loans, car loans, credit cards and every other type of debt other than mortgages, combined, according to data from the Federal Reserve Bank of New York. It amounts to about $23,500 in new federal debt for every person in the country.

While Trump was plotting his coup attempt, he told Congress the $600 stimulus check was a joke; it should be $2,000.

CNBC.COM
Trump demands Congress increase second stimulus check from $600 to $2,000. Here are the chances of that happening

Derick, you are really funny. When Trump was married to Ivana, he kept a book of Hitler's speeches in a cabinet on his side of their bed, and sometimes he read it at night. You are not welcome on my Facebook page any longer.

I wish I could say Derick is an aberration, but I have conversed with numerous Republicans on Facebook, who live in their own reality, and I see see lots more such Republicans on Facebook. Their version of God and country reminds me of Jerry Farwell, Tammy Fae and Jimmy Bakker, David Koresh, Charles Manson, Adolph Hitler. Stephen King should write a sequel to THE STAND.