If angels capture Trump, Biden and all Americans, will Facebook, Twitter, Parler, CNN, FOX, etc. ban their howls and shrieks? 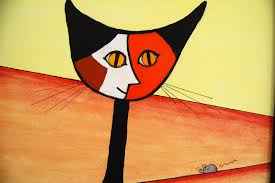 To my utter amazement last night, I watched several CNN news reports and seemingly incredulous Anderson Cooper ask guests what they thought about President Biden telling south of the border immigrants not to come to America now; while America is in the process of setting up, they should stay in their countries. I watched Anderson's guests try to explain it away, give it a different meaning. I asked my friend Young Prophet, what's the difference in what President Biden told the immigrants and President Trump telling the Proud Boys to stand down and stand by? Biden's trying to make me a Trumpeter! No chance of that, but he caused me to see him as big a threat to America as Trump, and caused me to imagine both of them living out their remaining days in the impoverished, politically unstable third world country of their choosing.

I also watched news reports last night, that American intelligence services determined Russia, ordered by Putin, launched cyber propaganda to get Trump reelected in 2020, Iran did the same to try to get Biden elected, and Red China chose simply try to deal with America the old fashioned way. I don't expect Trump, MAGAS and Republicans to believe Russia did that, nor that China stayed out of it, but they will believe Iran tried to get Biden elected. I don't expect Biden and Democrats to believe Iran tried to get him elected, but they will believe Red China stayed out of it and Russia tried to get Trump reelected. I concluded years ago that political parties are religions, have their own beliefs, which they say are true, regardless.

In a different church, I ran into some skeptics after I boosted the the demonic twin blog post on Facebook:

MtungarcdSnpmhnSotnt su1l4ffo ratm 8g:e3el3iha AdM  ·
South Alabama amiga Elizabeth asked:
What do you mean by saying we all have a demonic twin? Our shadow side?
I answered:
The shadow is what we do not know of ourselves, or know but try to ignore or hide from others and ourselves. It can be good, bad, beautiful or ugly. The demonic twin is just that, demonic. Pure Evil. Generally hidden, a part of the shadow, aligned with Lucifer, or if you prefer, Evil, literally ...

Charles
Sounds like a scam to me!
A Fool's Work Never Ends
Charles, scam is Lucifer's game, now If I ask for your money preaching stuff I don't know one Christian would pay me for, well, I suppose that makes me a capitalist?
Jamie

I wish Jamie, Trump, Biden, the right and the left are captured by angels, but if that happens, will their howls and shrieks be banned on Facebook, Twitter, Parler, CNN, FOX, etc.?