silence in the face of evil is evil itself 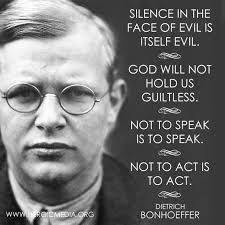 I posted this below on Facebook yesterday. Vermont "hippie" amiga Paula responded. She was featured in yesterday's some American witch and devil lore, and some Soul Alchemy post. I responded to Paula.

Sloan Bashinsky
I have a friend half my age, not a church person, his parents are not church people, who is in much the same shanghaied and adjusted by angels pickle that I'm in. He sent this email yesterday, reporting what Melchizedek had just told him:
We must all face Soul Alchemy to transcend our being
Here, however, is the snag on the briar, and before you know it, you are in the briar patch.
Trump did the unforgivable so many times while in office and before office, and after his election defeat. For us to move forward in the United States, then it means we must accept and FORGIVE the actions of those who have done the unforgivable, yet believe themselves to be washed clean of sin, who deny the sin of both commission and allying themselves with evil, the sin of remaining neutral under the rule of a man who sought to prey on the hate that hides in some men's hearts and dominates entirely the hearts of others.
It is not those of us who resisted Trump who must face the worst challenges of soul alchemy- indeed all of us face soul alchemy- but the Trump supporters? They are like the Israelites who left Moses stranded in the desert for 40 years. Being lost for 40 years? As a sentence upon us in the United States for what Trump did? That is getting off light.

Paula
It's a lot of heart work. Maybe the great coming together and realizing we are all one. The more we disapprove/hate/judge others, the more work we have to do? Sloan, have you read The Little Soul and the Sun by Neale Donald Walsch? Children's book, but can find on line in several versions.

Sloan Bashinsky
Didn't know of Walsh's book.
I recall you saying not long ago that you are doing heart meditations.
We learned during Hakomi body psychotherapy training in Boulder, that Hakomi is an out of use Hopi word, which means: How do I stand in relation to all these many realms?
It looks to me that Trump's internal feminine is severely damaged, and that explains why he is so outward focused, aggressive, self-applauding and in need of power and worshippers. I can imagine beneath that is a very wounded soul, rooted in his childhood experiences, perhaps with his father, from what I have heard about that relationship.
We learned in Hakomi training, that everyone has deep soul wounding. So, from that perspective, we all could view Trump as a terribly wounded soul crying for help! A COURSE IN MIRACLES says that people who misbehave are crying for help. Perhaps looking at Trump in that way relieves us of our anger and resentment? We get over him? We get on with our lives? As he and his legions redouble their efforts to take over America? I might be able to live with that, but I would hate it for my children and their families. Would I have abandoned them to monsters?
We learned during Hakomi training, that if you take over a physical, emotional or mental resistance in a client, that frees the client momentarily from the resistance, and what is beneath the resistance is free to come up into view, and that can get pretty wild and perhaps cause the client to see, feel and behave a little differently afterward.
Is there a way to take over Trump's resistance and free what is beneath to spring forth, which might be pretty wild, and then he has a new perspective and perhaps behaves a little differently?
Would people who don't like Trump, holding him in their hearts and prayers be such a taking over? Would he change? Would that be the goal? Or, would the goal be that we change? That seems to be what Melchizedek told my friend. It is so that we change. That's all we can change- us. And, that is what you describe you are doing. I seem to have a ways to go.
My daughters are at risk to monsters, America and the world are at risk. Dietrich Bonhoeffer, author of THE COST OF DISCIPLESHIP, spoke out against Hitler and the Nazis until they killed him. Jesus spoke out against the Pharisees until they had him killed by Pontius Pilate. The Republican Party mostly has surrendered to the monsters. I cannot surrender and then look my children, their mother, my friends, my angel handlers, Jesus and God in the eye. Or myself.
sloanbashinsky@yahoo.com
Posted by Sloan at 7:50 AM