What might Jesus say about America's south of the border refugee children, most if not all of whom are Roman Catholic? 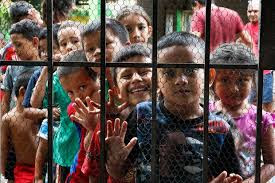 A friend called yesterday to say he'd read online that children showing up at USA southern border with note saying they have someone in America they can live with at an address in the note, are being allowed into USA. He said he called a friend, who works for ICE, and the friend said that is accurate. ICE is not contacting anyone at that address, but verifies using Google whether or not it is a good address, and if it is, ICE gives the child a bus ticket to that address.

My friend said, back in 1980, I think, Joe Biden was head of a Congressional Committee that oversaw the Mariel boatlift, which allowed Cuban refugees into America, many of whom became radical to retake Cuba from Castro and funded their efforts with cocaine imported from South America. I said, and how'd that go? And, didn't the take back Cuba immigrants mostly become Republicans? The children ICE is allowing in from Central America and Mexico into USA are refugees or drug cartel plants?

I got my ass crawled in dreams about that remark, and then I remembered some things and wondered if American Christians remember those things?

And it came to pass, that when Jesus had finished these sayings, he departed from Galilee, and came into the coasts of Judaea beyond Jordan;

And great multitudes followed him; and he healed them there...

Then were there brought unto him little children, that he should put his hands on them, and pray: and the disciples rebuked them.

But Jesus said, Suffer little children, and forbid them not, to come unto me: for of such is the kingdom of heaven.

And he laid his hands on them, and departed thence.

But if anyone causes one of these little ones who believe in me to sin, it would be better for him to have a large millstone hung around his neck and to be drowned in the depths of the sea. Woe to the world because of the things that cause people to sin! Such things must come, but woe to the man through whom they come! …

See that you do not look down on one of these little ones. For I tell you that their angels in heaven always see the face of my Father in heaven.

I imagine most, if not all Mexican and Central American children refugees at the USA southern border are Roman Catholic.

sloanbashinskyk@yahoo.com
Posted by Sloan at 1:09 PM