Facebook proved yesterday it is not leftist commie operation 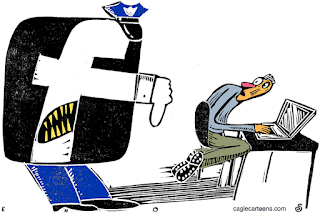 Yesterday, Facebook proved it is not a leftist commie operation. I explained how in Facebook discussion with a white Alabama Republican:

Alabama Republican Robert posted on FB:
MLB IS BLM SPELLED BACKWARDS!
Sloan Bashinsky
Imagine America without black athletes. Imagine Alabama and Auburn without black athletes. Then imagine America and those colleges without white athletes.
Robert
Sloan Bashinsky, Athletics is the only place in Colleges where only the best play and they keep score. The rest of College is all about inclusion, diversity and equity. Try applying those concepts to athletics.
When I speak of MLB, I speak of the organization not the makeup of teams. BLM is a Marcist organization, run by Marcist, according to their own website.
Sloan Bashinsky
Your Facebook post looks to me like it's straight from the KKK playbook. Nick Saban led a large BLM march of white and black athletes and students on the Tuscaloosa campus. Nick Saban is no communist, nor were the athletes and students who followed him. You should turn off pro, college, high and grade school football, basketball and baseball, so you can't see just how much black lives do matter.
I wonder if you are someone who says George Floyd was not killed by that cop's knee on his neck. It was drugs and a bad heart that killed Floyd, the cop is innocent. If you are such a person with that view, do you think you would be alive today if that cop's knee was on your neck for as long as it was on George Floyd's neck? No, you would just as dead as George Floyd, and just as flawed, but in different ways.
Robert
Sloan Bashinsky, I admire most athletes for their abilities and all the work to be a winner. I find it ironic that Universities do not apply the same policies to athletics, that they apply to every other organization within the University. If that makes me a racist, so be it. I believe in equal opportunity not equality of outcome.
Black Lives Matter had on their website that their leadership were trained Marxist. If you do not believe what they say about themselves, that is your problem.
Sloan Bashinsky
You should publish here where BLM says they are trained by Marxists. There are countless black lives matter "chapters". Here's a link that mentions BLM activity in Bessemer, Ala.

Home - Black Lives Matter
SloanBashinsky
MLB are trained Marxists?
Nick Saban is a trained Marxist?
If you don't make your grades at, say, Alabama, be you white, black, yellow, brown, blue or purple, you flunk out. If you make so so grades, you graduate, but the graduates with better grades get better jobs. But what's that got to do with your meme? Nothing. You sure walk and talk and look like a white supremacist to me. But then, so do just about all Republicans I see posting on FB. I wrote a bit about that at my blog yesterday.
AFOOLSWORKNEVERENDS.BLOGSPOT.COM

the Republican Party chose to be the White Supremacist Party

I paid Facebook to boost the text of that post, and they declined, proving all the noise from the Right about FB being a leftist commie operation is pure B.S.
Meanwhile, are you someone who says that white cop did not kill George Floyd?
That blacks stole the 2020 election from Donald Trump?

Imagine a U.S. Military without blacks.