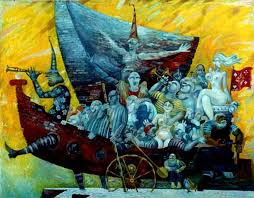 A lawyer friend in the Florida Keys sometimes sends me words of encouragement. The other day he emailed:

I opened the link, watched the entire video. Islamorada fishing guide Rick Ruoff, also a marine biologist, nailed what the invasive species, humans, did to wreck Mother Nature in south Florida and the Bay of Florida, but he didn't have any solutions. I wondered if, or how, I might respond?

This really is a treasure--

I opened the link, watched the entire video, wondered if, or how, Ernest Hemingway, Robert Frost, Tennessee Williams or I might respond?

In a dream that night, US 1 News Coordinator Bill Becker stared at me. I woke, figured I needed to respond to the two videos.

On the Rick Ruoff interview, I emailed my lawyer friend:

Rick Ruoff is one of my oldest, dearest Florida Keys friends. I fished the flats with him quite a few times. He took my daughters and second wife, Jane, and friends of mine and me out on the flats. We had a BLAST, every time, 'cause that's how Rick is.
The times Rick fished me alone, we had some interesting personal discussions about life.
Once on the flat in front of Ocean Reef Club, Rick told me a federal judge had fined Ocean Reef $60,000 a day until it stopped dumping its raw sewage into the saltwater creek there. Many years later, I told Capt. Eco Ed Davidson about that. Ed said he was the plaintiff in that lawsuit. I wanted to kiss Ed, but he was too ugly, so.
Before that, Ed came down from Marathon to Key West for a town hall meeting held by US Democratic Senator Bill Nelson, former space shuttle passenger, former Army Reserve during Vietnam war, over uproar of super loud F-18 war birds at Naval Air Station Key West. Nelson told us about his space faring, said he would put national security first.
Capt. Ed got his time to make citizen comments. He started with saying, during Vietnam war, he was a navy carrier Phantom jet pilot and was on John McCain's wing when he was shot down over North Vietnam. Ed said, when he came back to America, he became an instructor in the Top Guns program at Naval Air Station Key West. He made a pact with God that he was going to try to do something good, protect the Florida Keys.
Having put Senator Nelson in his proper place, Capt. Ed then minced no words about the devastating noise made by F-18s over the poor Stock Island county neighborhoods, but not over the Key West and Key Haven side of US 1, where the golf course and condo development and hospital and sheriff headquarters and ASPCA were, where some important Key West business folks lived.
What I'm driving at is Capt. Ed minced no words when bad shit was going on.
The fact is, there is no nice thing to say about what the Miami-Dade area has done to eastern Florida Bay.
I attended a public forum in Key West hosted by Key West the Newspaper (thebluepaper.com) and an Everglades environmental law firm. They had a panel of experts, including the then director of the National Marine Sanctuary.
I had tired to get the blue paper to have on the panel a marine scientist who was in 100- percent opposition with the Sanctuary director, and the blue paper had told me that scientist had had his say at a Key [West City Commission meeting. That scientist's position was chemicals had killed most of the reef and manatees on the east and west coasts, and were damaging the Glades and Florida Bay.
During the public form, the Sanctuary director said the solution to fixing Florida Bay was to release the chemically-tainted water in Lake Okeechobee, currently being released into the east-west canal, into the Everglades. By the time the Okeechobee water reached Florida Bay, it would be all cleaned up by the Glades.
During a break, I went behind stage and talked with the law firm and their scientists, and told them they had to address what the Sanctuary director had said.
After the break, those scientists said nothing.
I kept raising my hand to speak, and the blue paper representative kept looking right at me and picking someone else.
After the forum ended, I tracked down the Sanctuary director and let him have it.
I covered all of that on my blog the next day, and, as I recall, there was zip response. Zip.
In blue Key West, where even Republicans claim to be environmentalists, there was zip response.
Nor had the City Commission responded to what the real marine scientist had told them.
Very simply, real estate development was, still is, more important in the Florida Keys and Miami-Dade than anything else.
What can be done about that? The only thing I can think of is Mother Nature sends in a series of Category 5 hurricanes.
Ciaosky

On the Key West Bohemian documentary, my lawyer friend received this comment from someone else:

Cheap tourism, environmental rape and theme park mentality ware sure wrecking the quality of life in the Florida Keys! National Marine Sanctuary is managed like Disney.

My response to the Key West Bohemian documentary:

Thanks, Joe, hope all okay with you and the other recipients during these ... times.
Can't figure out for sure if this Bohemian Key West "documentary" is private project or sub rosa (sneaky) Tourist Development Council project. The guy at the writer's conference doesn't impress me with knowing much about Key West today, or he doesn't want to talk about it. You know, sky high-squared rents; littoral waters full of fecal and MRSA flesh-eating bacteria known to all local divers and physicians; 90+ percent dead reef; civil war moving toward live ammo over facemasks, social distancing, dirty cruise ships; right wing churches preaching hell fire and brimstone for all gays, lesbians, bis, trans, and straights who side with them.
The only blue place in the Florida Keys, Key West, where President Trump was well-received. Seceding from the union is romantic, but not getting federal hurricane disaster relief is terrifying. Tourists are spared the hurricanes, by being made to leave. Tourists are not warned of the terrifying MRSA threat. They come to have fun, can't blame them, then go home and post photos and videos on Facebook and look forward to next visit. If they wake up one morning with time release MRSA, they and their doctors wonder how that happened?
Can't imagine the poets and writers of old caring to be in Key West today, other than drinking and drugging are still the lynchpin of the social scene and its economy. I attended a number of Key West writer workshops and maybe 100 poetry guild meetings. Some of the guild meetings were reminiscent of the old writers and poets, but not the writers workshops. But then, I never was one to attend workshops to learn how to write or be a poet. If the Muse wasn't running in me, I did something else. I think the famous Key West writers and poets of old were in that ilk, and sometimes at poetry guild meetings they seemed in our midst.
Ciaosky