due process, karma, hazards of not obeying cops, etc. 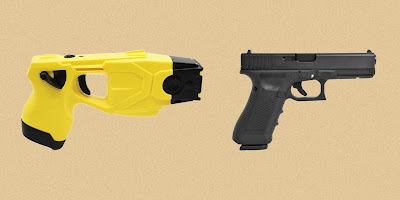 U.S. Navy public affairs officer I knew in Key West weighed in on the lady cop who shot and killed Daunte Wright with her Glock, while saying, "Taser, taser, taser":

JimSince it's happened at least 5 times in previous instances, you have to consider it a possibility. The jury will ultimately decided whether it was or not.Sloan BashinskySo, you shoot and kill someone 3 feet from you, thinking you are using a taser gun instead, and that's a defense? Not in any law book I ever read. Yet you are right about a jury, who knows what it might do? Historically, juries are reluctant to convict a cop.Here's the Minnesota Manslaughter in 2nd degree statute:

A person who causes the death of another by any of the following means is guilty of manslaughter in the second degree and may be sentenced to imprisonment for not more than ten years or to payment of a fine of not more than $20,000, or both:

(1) by the person's culpable negligence whereby the person creates an unreasonable risk, and consciously takes chances of causing death or great bodily harm to another; or

(2) by shooting another with a firearm or other dangerous weapon as a result of negligently believing the other to be a deer or other animal; or

(3) by setting a spring gun, pit fall, deadfall, snare, or other like dangerous weapon or device; or

(4) by negligently or intentionally permitting any animal, known by the person to have vicious propensities or to have caused great or substantial bodily harm in the past, to run uncontrolled off the owner's premises, or negligently failing to keep it properly confined; or

(5) by committing or attempting to commit a violation of section 609.378 (neglect or endangerment of a child), and murder in the first, second, or third degree is not committed thereby.

If proven by a preponderance of the evidence, it shall be an affirmative defense to criminal liability under clause (4) that the victim provoked the animal to cause the victim's death.

JimHey, we talk about due process. Your comment makes me think of the old west expression: we'll give the a trial then hang 'em.Sloan BashinskyBased on her body cam footage, this 26-year veteran lady cop president of her police union seems to have hung herself. She is getting due process. A jury will decide it if she doesn’t take a plea. Meanwhile, look at at hell she has visited on herself, the Wright family, her police department, her city, for which she alone is responsible, according to her body cam footage.Looks to me that black people in America can assume if they are stopped by a white cop and do not fully cooperate with and obey that cop's every command, they have a good chance of being killed by that cop. I do not think that can be said of white people who are stopped by white cops, nor by cops of any color.Jim I agree with you. We really need to rethink the way we do policing. The shootings don’t seem to be limited to white, male police officers either. So how much of it is racist? Not saying it doesn’t exist but personally, police should not pursue many traffic stops. Wait until you can get them later.Sloan BashinskyNot aware of blacks being killed by black cops for resisting during traffic or other stops, but I suppose that has happened. My father taught me to be polite if I was stopped by a police officer. Yes, Sir, No, Sir, etc.
A white fellow name Charles Eimers learned about driving away from a traffic stop in Key West. About 10 minutes later, he was apprehended following a slow chase by several KWPD cruisers. He left his car, walked onto a beach, followed orders, laid face town on the sand, was swarmed by white officers, was smothered to death. It was not reported in the local daily newspaper, the county medical examiner tried to cover it up, the deceased's family was kept in the dark. The boat rocker Key West the (blue) Newspaper finally unearthed it, all hell broke loose, the city got sued, settled for the policy limits, the cops all got a pass by internal affairs, the Florida Department of Law Enforcement and the State Attorney.
As for the 26-year lady veteran cop who can't tell her Glock on one hip from her taser on the other hip, I would not care to be her living where she now lives, after what she did. I might be afraid of being shot, or stabbed, or blown up, or run over. I might be checking into plastic surgeons to get my face look different. I would ask to be put into protective custody. I would have apologized publicly. I would be heap worried about karma. What I might hear when my roll is called up yonder. If I had done what she did to Daunte Wright, his family, her police department and her city, and to America.

Meanwhile, I'm pondering the odds of going to my local grocery store later today and me and lots of other people being shot dead by a NRA-approved assault-looking gun, instead of staying home and slowly starving to death or going into low blood sugar and croaking that way.  I could thank the shooter either way, for saving me from slow agonizing death by cancer, fast agonizing death by Covid-19, or being shot and killed for disobeying a cop?