What about due process for Daunte Wright? 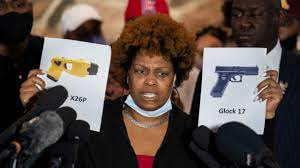 JimThe act of firing someone is a human resource/labor decision and details are probably included in the hiring documents. This stuff happens ALL THE TIME. I considered due process as an element of the legal system. Two very different things. In the military, commanders are relieved "for loss in confidence in their ability to command (lead their organization)".Sloan BashinskyThanks, Jim. Maybe I should update my book, Kill ALLThe Lawyers?Jimjust leave my wife alone. She's one of the good ones.Sloan BashinskyDid you see the question mark at the end of the title, and ALL being italicized? One chapter is entitled, "Don't Kill Your Lawyer." It's about clients who wreck their own case and their lawyer. Years after writing that book, I concluded the only way to kill all the lawyers is to stop using lawyers. In the Gospels, Jesus was not fond of lawyers.

Speaking of which, Alabama Republican and former prosecutor responded to How did 26-year veteran white cop who killed black Daunte Wright mistake her pistol for her taser if she carried her pistol on the side of her dominant hand and her taser gun on the other side?

RobertOf course Dante had nothing to do with his being shot. An innocent lamb, with an outstanding felony warrant, who refused to follow legitimate instructions of a police officer.Please forgive my racist attitude, to include additional facts to your obviously unbiased description.Sloan BashinskyI think you are indeed a racist, and it has deranged you. If you are a former prosecutor, as you recently told me, you once knew deadly force cannot be used unless necessary to prevent the escape and the officer has probable cause to believe the suspect poses a significant threat of death or serious physical injury to the officer or others. Tennessee v. Garner, 471 U.S. 1 (1985). So far, I have not seen anything reported that comes close to justifying the officer shooting and killing Daunte Wright. The officer's body cam suggests the officer meant to use her taser, but shot Wright instead with her pistol. It won't surprise me if her defense attorney and her police union do everything possible to make Daunte Smith into a monster the world is better off without, when I bet they may well have done more monstrous things but they didn't get caught.

Richard in Key West:
I asked my only cop friend, retired from New Jersey.  She says you carry the gun on your dominant side and your Taser on the other.  Sounds impossible to get that confused, if also the order in Minnesota.
Sloan
I read news article saying that is the order in the Brooklyn Center, MN police department. And, it might be impossible to wear a taser and Glock on same side, given their respective sizes. 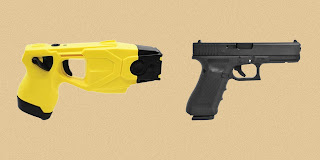