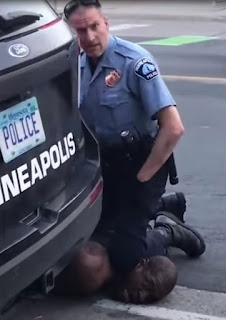 3:10 p.m., I turned on my TV and see on CNN that the jury reached a verdict in the Derek Chauvin trial, and the verdict will be announced by 4:30 p.m.

That's a really fast verdict for such a trial as this one has been, and all that went before it. I wonder why the verdict was not announced, so the wondering and suspense and TV hype would be eliminated?

I have no clue what the jury decided. I had no premonition. The angels that boss me did not say a word, other than they had me writing steadily about white cops killing black suspects.

Now on CNN, the jury didn't ask the judge any questions during their deliberations. They decided among themselves. Yet the verdict has not been announced.

The sub human tribes I have encountered are white tribes, which remind me of George Wallace followers.

I do not say there are not sub human liberal white tribes, black tribes, brown tribes, yellow tribes, red tribes. There may well be such sub human tribes.

The sub human white tribes make me embarrassed to be white.

Will publish this now, and perhaps update it later.

Chauvin found guilty on all counts. Each juror individually polled by judge said it was his/her true and correct verdict.

Chauvin looked unfazed during the reading of the verdict and polling of the jurors. Then, he was cuffed and led away.

I hope the jurors receive round the clock protection.