Trump is so possessed by Lucifer in plain view that even blind people can see it, but not Bible people, else they would be saying it online and in news media 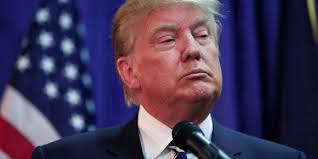 Text this morning to the only other living person I know, who was conscripted and ridden hard by angels.

Trump is so possessed by Lucifer in plain view that even blind people can see it, but not Bible people, else they would be saying it online and in news media. But then, the Devil's greatest trick is getting people to look at what it wants them to see, instead of what they need to see.

Email back and forth with a Key West friend, who kindly published my last book, A SOUTHERN LAWYER WHO BECAME A MYSTIC. 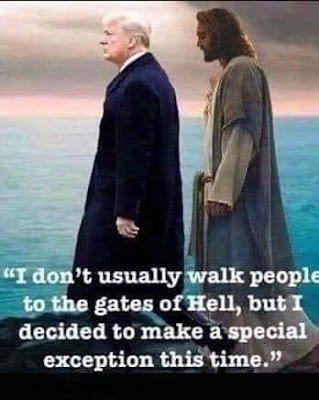 Maybe the Republican  Party should consider changing its name to the Benedict Arnold Party.

What do you suppose would have happened if BLM had invaded and vandalized the White House yesterday?

As for those who invaded the Capitol, I support trying the leaders for insurgency and attempting to overthrow the United States government … and a few hangings to serve as an example.

I saw in the fake news last night - you understand, don't you, that nothing happened at the national capitol yesterday?

- some of the fake Trump terrorists erected a scaffold and rope noose. Fitting, that same fake scaffold and noose to hang, for sedition, treason, mass domestic terrorism, starting with the Gang of Three, Donald Trump, Rudy Giuliani and Missouri Senator Josh Hawley, by the neck until they are dead. Then, do same to their robots, who got caught. As for VP Mike Pence invoking Amendment 25 and removing Trump from office, what if Pence pardons the Gang of Three?

Just saw on fake news (Wolf Blitzer), that Trump is asking his lawyers, advisers, etc. about pardoning himself. Not sure he can do that, but pretty sure he can pardon Giuliani, Hawley and every robot that got caught. I wonder how the U.S. Military feels about what happened at the national capitol yesterday? Time for a black op a la Osama Bin Laden?

Trump will pardon everybody in sight (including himself, although that may not be legal). I would hold off 13 days before charging any of the insurrection gang so Trump will be out of office.

Yep.
The insurrection terrorists in jail already are being prosecuted, and thus can be pardoned by Trump. I don't  think he can pardon any insurrection terrorist not yet identified.
What all of my friends who voted for Trump are seeing now is the real Donald Trump, who was in plain view all a long, and do they even see him now, cry for his head, so to speak? So far, I have not seen one of them cry for his head, or for him to be removed via Amendment 25, or impeached.
The most telling indicator of what a turd Trump is, is he told his mob that he and they had to be tough, and he was going with them to the Capitol, but he didn't go with them. Hard to imagine how any of his mob could ever believe him again, but I bet they give him a pass.
The deal in the law is, if a mob boss, or a cartel boss, give an order to their underlings and the underlings carry it out, it's as if the boss did it, too.

AMAZON.COM A Southern Lawyer Who Became a Mystic

Questions to the author from Absolutely Amazing eBooks and my answers:

1.     What do you like best about writing? It makes me feel really alive2.     When did you first realize you wanted to be a writer? During history of the American novel course the second semester of my senior year in college3.     Which author has inspired you the most? Key West Poet Laureate Robert Frost, who took the one less traveled by and that made all the difference4.     Who is your favorite author to read for pleasure? John leCarre5.     Do you write on a specific schedule or as the mood strikes?  as the mood strikes6.     Do you outline your books or see where the story leads? No, the Muse takes over and I follow7.     What do you admire most in books you read by other authors? authenticity and depth8.     What irritates you the most in books you read by other authors? when I feel the books are contrived9.     What’s the favorite compliment or accolade you’ve received for your writing? that I need to keep writing10. What’s your favorite quote about writing? “The truth will set you free, but first it will piss you off.” Gloria Steinem