wonder how Yahweh, God, Allah view rockets and bloodshed in "The Holy Land"? 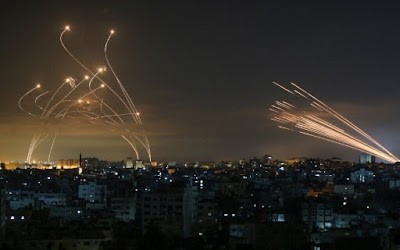 Been mulling the rockets and bloodshed in what many people  call "The Holy Land."

Been wondering how Yahweh, God, Allah view it?

I ran across something I wrote to someone else fairly recently:

t looks to me that what is called humanity is a collection of subspecies, in the perspective/belief sense, which have developed side by side and except for common genes are about as related as dogs and cats. How that resolves, or if it resolves, seems to me to be beyond the subspecies' ability.

As I left the U.S. Post Office a few days after 911, I sensed the presence of angels around me, then into my mind came:

America needs to get out of the Middle East altogether and let Israel and Islam work it out or fight it out and in that way learn which, if either of them, is God's chosen people.

Some months after that, I attended a Sunday school class during which the class teacher, who led a bikers for Jesus  club that cruised around on weekends, say, "All Muslims should be killed!"

I asked, "What about turn the other cheek?"

He looked at me, calmed down, talked some more, got mad again, said again, "All Muslims should be killed!"

Something seized me, I shouted plenty loud for the other classes to hear, "Don't Christians read the Bible?!"

I said more quietly, something like, "In Genesis, God told Abraham that Ishmael's seed would become a great nation and would cause Isaac's seed trouble. If God prophesied that, why do Christians get so worked up about it?"

The Sunday services in that church wove Jesus and patriotism into a neat tapestry, although nothing in anything Jesus said in the Gospels did that. Nor did he say all people he didn't like should all be killed!

Perhaps I should not drag Jesus into a war between Islam and Judaism, which do not worship Jesus, thus are not held by God to the Jesus standard?

Perhaps I should simply say that what now is going on between Israel and Hamas looks to me like mass insanity and mass demonic possession, and God by any name has nothing to do with any of it.

Perhaps Catholic Joe Biden can cool things off there like an earlier Democrat president, Baptist Jimmy Carter once did when the strife was between Israel and Egypt?

Perhaps Biden can persuade Israel to give back some of the land it took since Carter brokered peace there?

Meanwhile, a friend who moved to Tel Aviv a couple of years ago to be near his daughter and her family, said every home in Israel has a bomb-proof room to head for when rockets are flying.