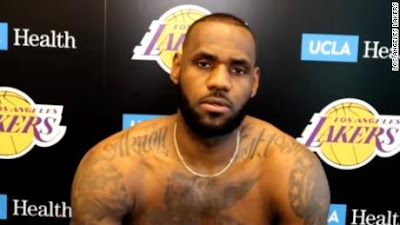 Saw on CNN last night, when asked if he had been vaccinated for Covid-19, Lebron James talked a while and didn't answer yes or no. He said it's his business. CNN newscasters seemed flummoxed.

The duplicate bridge club where I play the game my parents taught me emailed its members yesterday afternoon that the club will reopen at the clubhouse next week with face to face play. Everyone is required to show their vaccination cards, or they will not be admitted. Facemasks will not be required, as per current state law, but if any member requests people at his/her table to wear a mask, then masks will be worn. The club is nearly all white and predominantly Republican.

Also on CNN last night, I saw Lebron promote a new tequila brand and a new documentary he had co-produced: "DREAMLAND: The Burning of Black Wall Street." (1921 Tulsa massacre)

CNN Films’ DREAMLAND: The Burning of Black Wall Street, executive produced by LeBron James, Maverick Carter, Jamal Henderson, and Philip Byron for The SpringHill Company, and Amy Entelis and Courtney Sexton for CNN Films, will premiere Monday, May 31 at 9:00pm Eastern on CNN and CNN en Español.  Directed and produced by Salima Koroma, the cinematic documentary celebrates the Black cultural renaissance that existed in the Greenwood district of Tulsa, OK, and investigates the 100-year-old race massacre that left an indelible, though hidden stain on American history.

The May 31 premiere will broadcast on CNN and CNN en Español, DREAMLAND: The Burning of Black Wall Street will also stream live for subscribers via CNNgo (CNN.com/go and via CNNgo apps for AppleTV, Roku, Amazon Fire, Samsung Smart TV, and Android TV) and on the CNN mobile apps for iOS and Android.  The film will be available beginning Tuesday, June 1, on demand via cable/satellite systems, CNNgo platforms, and CNN mobile apps.  The film will encore Saturday, June 5 at 9:00pm Eastern.  HBO Max has acquired streaming rights to the film and will offer it for subscribers at a later date.

Back to Lebron getting vaccinated.

News articles, link to one below, indicated Lebron not being vaccinated prevented him from practicing as much as other Los Angeles Lakers and contributed to the team's lower than expected performance this year.

Lebron violated NBA Covid protocol by attending an event promoting the new tequila, but Lebron was not disciplined.

Lebron is a national black superhero. He wants everyone to know what happened in Tulsa in 1921, but today he's the vaccination hold out on the Lakers and violated NBA Covid protocol to promote a new tequila?

There once was a fellow most Republicans and Democrats revere, who was reported to say:

Do unto others as you would have done unto you.

I saw a recent news report on why the polls were so off in 2016: many people asked if they were going to vote for Donald Trump, said no, because they didn't want anyone else to know.

I saw Lebron say whether or not he got vaccinated is his business.

There once was a fellow most Republicans and Democrats revere, who was reported to say:

Again you have heard that it was said to those of old, ‘You shall not swear falsely, but shall perform to the Lord what you have sworn.’ But I say to you, Do not take an oath at all, either by heaven, for it is the throne of God, or by the earth, for it is his footstool, or by Jerusalem, for it is the city of the great King. And do not take an oath by your head, for you cannot make one hair white or black. Let what you say be simply ‘Yes’ or ‘No’; anything more than this comes from evil.

When Jesus said evil, he meant, Satan, the Devil.