the most contagious and dangerous virus: America's golden idol 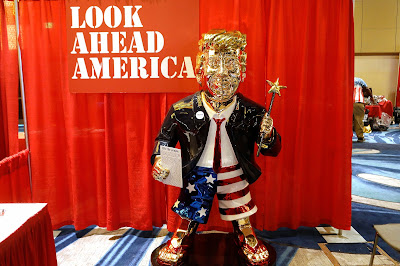 The other day, twice Trump voter and defender Sancho Panza told me in an email that I would not hear further from him, he was leaving social media to pursue other interests. I wondered how long that would last? He sent this yesterday:

Biden Strikes Syria And Liberals Turn Into WARHAWKS!
A true lover of wisdom has hands too busy to hold on to anything! He learns by doing and every pebble in the path becomes her teacher!  Oink

Thought you were taking a break? I didn't watch this guy's podcast. Since when weren't Democrat presidents war hawks? Clinton? We must never forget Johnson, Truman, Roosevelt.
Today's rant.
Heil, Joe! Heil, Donald! May you both be abducted and sawed up.

Remember that most of the 911 terrorists were Saudi Nationals! I like that Black guy's youtube channel, too bad that you are such a wuz... he likes to analyze "The News" in a way that is not the same as others with a one track mind! The bombing ordered by Biden was funny to me, given the fact that you bragged he was different from Trump and would be more conducive to peace!

I basically had stopped watching any news or responding to political emails from friends! It's not easy to live a real life with this stupid pandemic restrictions in my State... wish I lived in Hollywood, Fl.... take a look!
Live Beach Cam Hollywood Beach Broadwalk, Florida

I've seen a number of this podcaster's presentations, all pro-right, perhaps he sometimes is pro-left? I hoped Biden would be more peaceful in America and hoped he would get America out of overseas wars against people who ain't nearly as threatening to Americans at home as Trump and his legions, and the radical left in America. Saw talk in news today of building a great wall around the Capitol. Some of your political correspondents seemed to me to be unable to think like their brains originally were designed. They have a great deal of company on the right and on the left.
New York has made a nice mess of the gift from Red China. Perhaps a giant earthquake will separate California from the American continent, and California will float to Red China via ocean currents and tsunamis. Alabama is relatively sane for some time about the gift from Red China, but lots of people here still are out of work, or working virtually, and spending lots of time at home. Bars and restaurants limping by, or closed.
After 911, America's borders were closed, nobody could leave, but the Saudi royal family members who were here, they got to hasta la vista pronto. I remain convinced that was not entirely a foreign attack, Americans were involved, but I can no more prove it, than anyone can disprove it. If I put that on Facebook, will I get put into Facebook jail, again?
A friend told me today that this very same lovely Saudi crown prince Biden so far declined to sanction, like ban him from America for life and the hereafter, with President Trump's okay and influence a few years ago, got a closed Las Vegas casino opened for a big party of some kind. I've read a few times online of Saudis twice bailing Trump out of financial vices around his golf balls.

Who really knows what's coming.... nobody predicted last year at this time what would come shortly after! But your habit of blaming Trump for everything cannot be applied to Biden... I think he's totally clueless at this point and it seems that he will not last long before Kamala takes over, what a debacle... and you thought Trump was an ass, hold on to Rocinante, Señor Q!

I know Trump is an ass. I knew Hillary was an ass. Perhaps Biden will turn out to be just as big an ass.
I doubt aliens will invade Earth, perhaps too dangerous: the human virus might prove fatal to ETs.
But then, maybe the ETs decided there is a far more contagious and far more deadly virus on Earth. The Trump virus, which you clearly contracted by voting twice for him and boasting about it, by defending him as if your soul depended on it, and by attacking everything but him, like I see other Trumpers do every day on Facebook. The monster in their living room makes Joe Biden look like Mickey Mouse.

I see Biden a lot on TV now. I don't see a raving, self-worshipping, aspiring despot, who claims to be God-sent. I don't see someone I would like to see swallow molten gold and become his own golden idol, frozen forever in time and space. You don't like living in NY? Move to West Palm Beach, where you can be near your golden idol. And by all means, ignore your declaration to stay off social media. Keep sending me proof you have lost your soul. It makes my heart wince, but there are no fig leaves in God's Kingdom, nor any secrets.

sloanbashinsky@yahoo.com
Posted by Sloan at 8:05 AM