All Texans in favor of frozen Texas seceding from the Union say, "Aye!!!" 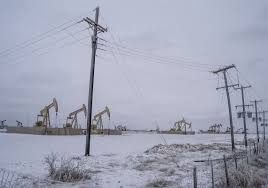 Socialism is the fire department saving your house. Capitalism is the insurance company denying your claim.
After Texas went artic, powerlines went down, millions of Texas at risk, David sent: 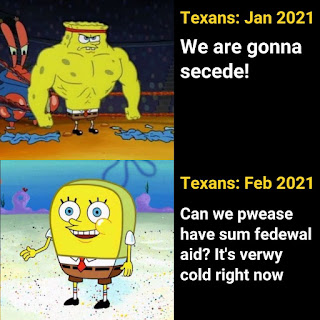 I continued this Morning:

I wonder if even one Texan Republican or MAGA state legislator or private citizen, and their God is always on his side Republican US Senator Ted Cruz, who was born in Canada, considered the possibility, remote as it might seem to them, that their until very recently desire to secede from the Union might have something to do with Texas being annexed by the North Pole?

Texas Republicans endorse legislation to allow vote on secession from US

They have given the keys to the asylum to the inmates. Perhaps we could get Mexico to take them back. I have heard some of the same nonsense in Oregon.

I kinda doubt those Texas inmates are hollering right now about seceding. Maybe they tear down the border wall and flee south, hoping to find warmer clime.

The Republican party has been in complete control of Texas for the last 20 years. Still they try and blame a o c. They have two nuclear reactors.

They should have seen the handwriting on the wall back in 2011 when they had the big freeze.

El Paso is not experiencing this because it is not on the independent power grid.

Just now on CNN, so it's fake news, Ted Cruz flew to Canun with his kids.

I think that could be more aptly ascribe to rats leaving the sinking ship.

CCN just now reported Texas Gov Ryan advised Texans to decline outside help to keep Feds out of the state. How about that federal boarder wall, them Texans want to be rid of that, too? And NASA in Houston, and hurricane disaster relief, and oil depletion allowances?

I'm sure they want to hold on to those perks with the arms of the jungle.

Ted Cruz is blaming it on wind turbines. Iowa gets 40% of its power from wind energy and it's turbines are still running. Texas refuse to winterize theirs.

Texas does appear to be schizophrenic.