If Covid-19 keeps mutating and vaccinations don't work, did Stephen King predict that in The Stand? 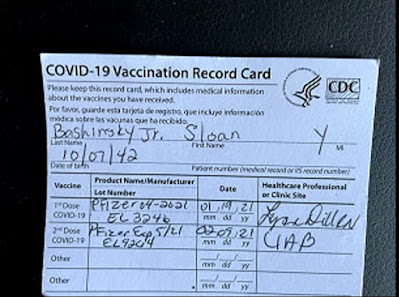 Received second Phizer vaccine shot yesterday. Have photo of vaccination card in my i-Phone, to prove it. Texted photo to my daughters, to prove it.

Told nurse who gave 2nd shot, that I can use the vaccination card as passport to travel to foreign countries and return to America. She gave me the look.

Told older daughter that I'm going to run around not wearing a mask, hugging and breathing on people, telling them not to worry, I was vaccinated twice!

"Daaad! You can't do that, you might get infected."

"I wouldn't traumatize people like that, but if I did get infected, that's a miracle, isn't it?"

"You don't believe in miracles?"

My friend Young Prophet, who frequently reports what he hears in dreams, visions and face to face from angels known in the Bible, continued our discussions reported in yesterday's America's greatest threat: Red China or Donald Trump? If you have not read Stephen King's THE STAND, I suggest you read it. post at this blog:

In "The Stand" the virus was nicknamed "Captain Trips". It referred to the fact that Jerry Garcia, lead singer and one of three lead guitarists for the Grateful Dead had been asked how many LSD trips he had done? He said more than 10,000 and maybe slightly less than 20,000.

Thus because the virus was like a painful flu you could not shake or get inoculation for, it was like 10,000 trips to the M.D.'s, 10,000 trips to bed rest, 10,000 trips of awful, terrible shakes, shivers, pain and death for all but a few people who had natural immunity.

It was also named Captain Trips, because, like the Grateful Dead, the virus toured everywhere and constantly and nothing seemed to stop it.

COVID-19 is the virus that has toured every country, every city, every one horse town, every favela, every hitching post for a burro. It has killed millions.

AIDS took nearly decade for new strains to appear which made treating an already nearly impervious virus that much more difficult.

In less that a year, we know of COVID-19 and two more strains that the media is being allowed to talk about. We have no idea if the two extra strains are all there are. From the very beginning COVID-19 and its threat has been downplayed. Trump downplayed it. His experts downplayed it.

Just like the Captain Trips Virus in The Stand.

Trump is Randall Flagg. If people are going to ingest the material that represents The Stand, read the book, do not rely on the two TV adaptations which fall FAR SHORT.

Be prepared to make your stand.

I have read articles by medical scientists, saying Covid-19 is here to stay and we don't know yet how vaccines will work against mutations.

South Africa recently suspended the vaccine it was using, because it seemed not effective against the new Covid-19 strain that appeared in that country.

How long can governments prop up their countries, if their people cannot get back to "business as usual"?
Watch the film footage of the Capitol riot to see just what human beings really are capable of when they don't like how things are going.
This part of your dreams last night might forecast the effect of Covid-19 on "business as usual":

The entire world, EARTH, burning like the wildfires in Australia and the west coast USA, except world wide. I saw a wraith appear from the aether, snap his fingers, laugh at me, and said "So the species self destructs."