What will happen to Key West during hurricanes if its shaman, who is homeless and persecuted by city police, is no longer there? 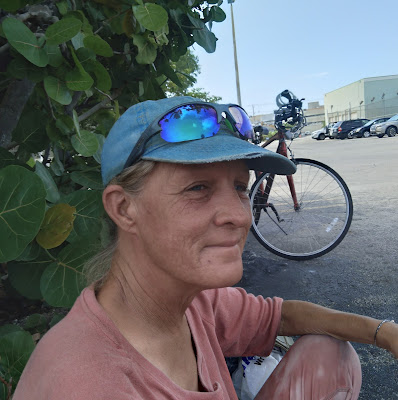 A longtime reader of this blog responded to human and metaphysical sagas of a Key West homeless woman reported in the homeless nations: Key West and the Kingdom of Trump post at this blog:

And you left out a lot of what "K" has been thru over the years..surgery, being attacked in her hidey place, harassment from inmates, medical neglect, and more, it's been so cold down there...You took care of her, took her in. I'm surprised she has stayed there.

I never once saw her "out of order", drinking yes, but cordial...how can they keep targeting her like that??

I have seen Kari out order, and often have seen her with too much vodka in her, but she seems to be trying to be different, which is a lot easier, perhaps, living under a roof, than living on the street.

There is no way to begin to imagine living on the street, it has to be done to know it. That's how I came to know it, and that living on the street is far harder on women, than on men. Homeless women are constantly hit on by homeless and mainstream men. They are at risk to sexual assault. They get beaten up by men.

I think KW police target Kari because of me. If she had never met me, it might have gone very different between her and KW police, whom I called out many times on my blog. The former manager of the homeless shelter was furious over what I wrote about him, and about him and Kari. He bragged to me about calling the cops when he saw Kari in a shopping center. She told me of seeing him, and then cops showed up where she was and arrested her. Kari told me she did a ritual on that man, which an old Native American shaman once had taught her. Eventually that man developed really serious medical problems.

Kari told of one cop being very abusive toward her, and I wrote about that at my blog, and then I made a public record request for the officer's body cam, and after a good bit of commotion, the police department's public affairs officer told me the cam wasn't on that day and the officer had been counseled about that. That was after the police killed Charles Eimers, and they were all under strict orders to turn on their body cams during arrests. I can imagine that officer's body cam was wiped, instead of not being turned on.

At this time, Kari has no place  to live, other than Key West. Her parents told her that she cannot live with them. Her mother asked me to have her live with me, but my  lease won't allow that, without a credit report and background check, and I wonder if the apartment management would like seeing Kari's background report, all those arrests for open container, trespass, a D.U.I., and an aggravated assault with a gun. Not seen in the rap sheet, the gun was unloaded, Kari was trying to get a drunk abusive tenant to leave her boyfriend's home, where she lived. It was her boyfriend's gun. She is who called 911, deputy sheriff's came, told the drunk tenant sleep it off in his car, then leave and not come back to get his belongings without the homeowner being there. The deputies charged Kari with assault with a gun and having fired the gun once some time before in the back yard, which she told them she had done, trying to kill a large, loud frog in the swimming pool.

While Kari was in jail on Stock Island, her boyfriend died. When she finally was released on probation, she had no place to live, was homeless in Key West. That was 2015. I met her in Bayview Park not too long after she was released. I hope before too long to have enough money to get her off the street, under a roof. Perhaps we live together, perhaps not. I have two other very close friends very near being homeless, again, whom I also hope to make more secure and comfortable. I really would like to live in Key West again. Don't need a car to get around there. Bicycle just fine. Also, city transit buses. When big bad hurricane headed in, I can leave and come back after it's over, or I can stay and whatever looks after Kari during hurricanes can look after me, too. If Kari leaves Key West, what will protect it from something like Cat 5 Irma, after what that city did to Kari?

I remember it all...it is a conundrum for sure

I realized a good while ago that what we do, or don't do, during life on this world, builds a record in a different realm, which is reviewed by beings over which we and our beliefs have no control. Starting a good while ago, I was treated to how those beings viewed what I had done, and didn't do, and was doing and not doing. I was told that every person has that experience in the afterlife, and it begins for some people in this life. The review, with our souls' participation, even though our egos don't consent, leads to what our souls experience next. I have a friend, whom I call "Young Prophet", who appears fairly frequently at my blog, which you seem to have read for quite a while, which, you know, could get you a reputation😎

YP reports ongoing being shown things generally and about himself, often not pleasant, often in rebukes, by angels known in the Bible. He is not and never has been a church person. His parents are not church people. They are convinced he is insane. I sympathize with him, because a lot of people think I'm insane, for the same reason. From what Kari has told me, angels have been trying to get her attention since she and I met, if not before then. Since she was a young woman, she told me, she was having visions and knowing things that could not be explained by human rationale. So, I suppose she's insane, too, by "normal" human standards. All of that, and much more, is a ... conundrum.