Who betrayed America the worst: Hillary Clinton or Donald Trump? 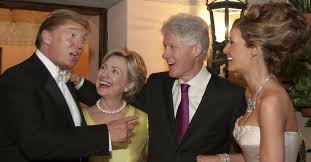 Forward from Sancho Panza, who voted twice for Barack Obama, then twice for Donald Trump - Waldo is a Trump lover:

Why didn't Trump bring this out to the public, by declassifying it?! Is Trump a disguised Swamp Creature, just serving his "time" to keep the "natives" off balance? Is possible!  As is possible that this is all part of the misinformation game that both parties play!

Real eye opener….and I believe every word of it!   Stuff from my archives  RR

So here's the REAL story.  Amb. Stevens was sent to Benghazi in order to retrieve US made Stinger missiles supplied to Ansar al Sharia without Congressional oversight or permission.  Hillary brokered the deal through Stevens and a private arms dealer named Marc Turi.  Then some of the shoulder fired missiles ended up in Afghanistan and were used against our own military.  It was July 25th, 2012 when a Chinook helicopter was taken down by one of our own Stingers, but the idiot Taliban didn't arm the missile and the Chinook didn't explode, but had to land anyway.  An ordnance team recovered the serial number off the missile which led back to a cache of Stingers being kept in Qatar by the CIA  Obama and Hillary were now in full panic mode and Stevens was sent in to retrieve the rest of the Stingers.  This was a "do-or-die" mission, which explains the stand down orders given to multiple commando teams.  It was the State Dept, not the CIA, that supplied them to our sworn enemies, because Petraeus wouldn't approve supplying these deadly weapons due to their potential use on commercial aircraft.  Then, Obama threw Gen. Petraeus under the bus after he refused to testify that he OK'd the BS talking points about a spontaneous uprising due to a YouTube video.  Obama and Hillary committed treason and THIS is what the investigation is all about, why she had a private server, (in order to delete the digital evidence), and why Obama, two weeks after the attack, told the UN that the attack was the result of a YouTube video, even though everyone knew it was not.  Further...the Taliban knew that this administration aided and abetted the enemy without Congressional approval when Boehner created the Select Cmte, and the Taliban began pushing the Obama Administration for the release of 5 Taliban Generals.  Bowe Bergdahl was just a pawn...everyone KNEW he was a traitor.  So we have a traitor as POTUS that is not only corrupt, but compromised and a woman that is a serial liar, perjured herself multiple times at Congressional hearings.  Perhaps this is why no military aircraft was called in...because the administration knew our enemies had Stingers.  Forward this again and again and again until everyone reads the true story.

I dunno, you voted for Trump twice, You watched him for 8 years. You know what he is like. Do you think there is a snowball's chance in hell he knew of this and did not hand it to FOX, put it on Twitter, read it at a press conference, and hand it out to every journalist there?

You voted twice for Trump, and boasted about it. You refrain his mantra, the election was stolen. You repeatedly defended him for not putting his ass on the line and making hydroxychloroquine and zinc freely available in April. You have yet to condemn him for inciting the Capitol riot. Far as I'm concerned, you married him.

What Trump and his legions habitually break, is the truth about themselves; always pointing the finger somewhere else; spare me the Democrats also do that - off course they do.

I don't care about the Demonrats or the Repugnants, I was talking about you... you're like one of those old Music Jukeboxes that you put a coin, select a song and get to dance with your girl, but you have a broken jukebox for a brain and no matter what record I select... the same Trump Maga Ballad plays on, and on, and on!  Good night Sloan... just give it up!!!

If you don't care about the Republicans or the Democrats, then quit talking about them?

We learned today that all but 11 Republicans in the House of Representatives are QAnon. Soon, we will see how many Republicans in the Senate are QAnon. And you are passing out Benghazi tract to get Hillary Clinton. She may truly deserve to be got, but that's a fer piece from the burning and sinking USS America I see every day on TV, news show after news show.

I am not passing anything about Hillary to you, I merely copied you(and others) on my response back to Waldo! Whenever I approach you via email that is not related to anything you've published on line, I am doing so the same way I would with any friend, to share, nothing special; but it looks like you're always trying to egg me on to respond to your obsession with Trump, perhaps so you can publish our exchange on your blog page, perhaps just pure curmodgeonism!  The only Q I know is the omnipotent prankster from Star-Trek.... cool guy!

Sorry, but I am beginning to realize you're not yourself lately, perhaps the health issues, Old Age, The Lockdown, recent loss, whatever... so for the sake of our mutual peace of mind, you will not be getting any unsolicited emails from me again!

Sure looked to me that what you forwarded (passed along) was about Hillary.

Did you actually read my response back to Waldo? Did I agree with the content of his message, or did I do to him the same as I do to you? The difference is that he doesn't get all discombobulated, like you do!

My initial response was to what you wrote to Waldo and what he had sent to you.

sloanbashinsky@yahoo.com
Posted by Sloan at 8:39 PM