Was the Christian handmaid tale written by a gay man? 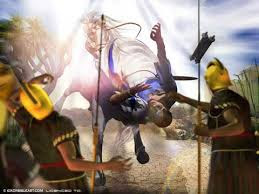 Saul of Tarsus knocked off his horse

on the road to Damascus

Below is a link to the most recent article I read about U.S. Supreme Court nominee Amy Coney Barrett being a handmaid in the People of Praise sect of Christianity, which, along with Barrett, went to considerable effort to remove any tangible trace of her membership from that sect. Now why would they do that? Was it because Barrett being nominated to be a U.S. Court of Appeals judge might raise questions about her believing women should be subservient to men? No, of course not. It was done to protect People of Praise members' privacy, according officials of the sect (cult).

Amy Coney Barrett served as a ‘handmaid’ in Christian group People of Praise
Can Barret keep her religious beliefs separate from her thinking when she is being a judge? Can a sow forget she is a sow?

Origin of the handmaid's tale, according of St. Paul, formerly Saul of Tarsus, persecutor and murderer of Christians:

1 Follow my example, as I follow the example of Christ. 2 I praise you for remembering me in everything and for holding to the traditions just as I passed them on to you. 3 But I want you to realize that the head of every man is Christ, and the head of the woman is man,[a] and the head of Christ is God. 4 Every man who prays or prophesies with his head covered dishonors his head. 5 But every woman who prays or prophesies with her head uncovered dishonors her head—it is the same as having her head shaved. 6 For if a woman does not cover her head, she might as well have her hair cut off; but if it is a disgrace for a woman to have her hair cut off or her head shaved, then she should cover her head. 7 A man ought not to cover his head,[b] since he is the image and glory of God; but woman is the glory of man. 8 For man did not come from woman, but woman from man; 9 neither was man created for woman, but woman for man. 10 It is for this reason that a woman ought to have authority over her own[c] head, because of the angels. 11 Nevertheless, in the Lord woman is not independent of man, nor is man independent of woman. 12 For as woman came from man, so also man is born of woman. But everything comes from God. 13 Judge for yourselves: Is it proper for a woman to pray to God with her head uncovered? 14 Does not the very nature of things teach you that if a man has long hair, it is a disgrace to him, 15 but that if a woman has long hair, it is her glory? For long hair is given to her as a covering. 16 If anyone wants to be contentious about this, we have no other practice—nor do the churches of God.

Although Paul was a Jewish Pharisee when he was Saul of Tarsus, and although the sacred duty of such men was to marry and propagate God's chosen people, nothing in Paul's writings indicates he ever married or had children. Paul wrote of having a Satanic thorn in the flesh, which he had asked God to remove, but God replied that the thorn would strengthen Paul in Christ. Did Paul have a defective penis? Did he have PED?

1I must go on boasting. Although there is nothing to be gained, I will go on to visions and revelations from the Lord. 2 I know a man in Christ who fourteen years ago was caught up to the third heaven. Whether it was in the body or out of the body I do not know—God knows. 3 And I know that this man—whether in the body or apart from the body I do not know, but God knows 4 was caught up to paradise and heard inexpressible things, things that no one is permitted to tell. 5 I will boast about a man like that, but I will not boast about myself, except about my weaknesses. 6 Even if I should choose to boast, I would not be a fool, because I would be speaking the truth. But I refrain, so no one will think more of me than is warranted by what I do or say, 7 or because of these surpassingly great revelations. Therefore, in order to keep me from becoming conceited, I was given a thorn in my flesh, a messenger of Satan, to torment me. 8 Three times I pleaded with the Lord to take it away from me. 9 But he said to me, “My grace is sufficient for you, for my power is made perfect in weakness.” Therefore I will boast all the more gladly about my weaknesses, so that Christ’s power may rest on me. 10 That is why, for Christ’s sake, I delight in weaknesses, in insults, in hardships, in persecutions, in difficulties. For when I am weak, then I am strong.

Every woman near Paul knew he was gay and that did not matter to God, either, but that is not part of the handmaid tale today.