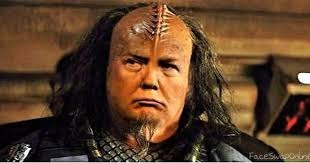 Two town hall meetings, after President trump canceled the second debate, was blatant proof that America is in a civil war that yet lacks both sides shooting and maiming and killing each other, which could become realty, given the hate and rage I see daily on Facebook and TV News.

I ruminated all of today on last night's "dueling town hall" meetings. Dueling? Donald Trump and Joe Biden faced off against each other? That's a duel, isn't it. With guns, fencing swords, knives, etc. Oh, it was a duel between ABC and NBC. Perhaps for the best. Joe Biden was able to answer the ABC town hall audience's questions without being interrupted by the Klingon candidate, who was fencing elsewhere with the NBC host.

A Japanese samurai or Asian martial arts master would laugh at the Klingon and would rip him to shreds in actual physical combat, as would any Navy SEAL who went on the Osama bin Laden raid the Klingon says did not kill bin Laden.

But then, the Klingon said John McCain was not a war hero, but was a loser, because his U.S. Navy carrier fighter jet was shot down by a missile over North Vietnam and he was captured and spent more than 5 years in a North Vietnam prisoner or war camp and never yielded to offers for better treatment if he condemned America.

While the Klingon avoided the Vietnam war via getting how many deferments for a bone spur in which foot he cannot now remember?

The Klingon asked Russia to help him get elected.

The Klingon is what Birmingham, Alabama white rich kids I grew up with would call "rich white trash".

The Klingon's followers view him as the Messiah. If they had ears that hear and eyes that see, they would see he is the Devil's apprentice.