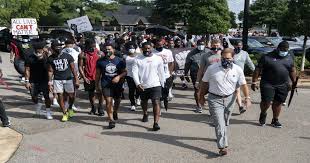 It was all over the national and Alabama news this past Wednesday that Alabama head football coach Nick Saban had tested positive for the coronavirus, was asymptomatic, isolating at home, and virtually coaching via zoom. His offensive coordinator would coach the game against Georgia yesterday, Saturday.

It was all over the national and local news around noon yesterday, Saturday, that Coach Saban had tested negative on Thursday, Friday and yesterday morning (Saturday), and under Southeastern Conference medical protocol he was allowed to return to duty and coach the top-billed #2 Alabama vs. #3 Georgia game last night in Bryant-Denny Stadium, in Tuscaloosa .

This Crimson Tide fan since childhood thought, "How interesting, a miracle."

During a nap dream yesterday afternoon, a doctor pointed at me and said to other people, "He doesn't think like other people and that's what we need to move forward."

I woke up thinking the dream was about Coach Saban being healed by God, because he had practiced social distancing and wore a mask at work. And, wearing a mask, he had led his team and other University of Alabama athletes in a Black Lives Matter (BLM) march on the Tuscaloosa campus, to where Alabama Governor George Wallace had stood in 1963, blocking blacks from entering the University of Alabama.

I thought about President Trump being against facemasks and social distancing, and then testing positive and being put in Walter Reed hospital with symptoms and given an experimental drug not available to the general public, after he had led a mostly maskless, crowded, super spreader event in The Rose Garden, to celebrate the death of U.S. Supreme Court Legend Ruth Bader Ginsburg and his nomination of People of Praise handmaid Amy Coney Barrett.

I thought about an article I read early yesterday morning about Melania Trump requiring masks and social distancing in her area of the White House. I wondered if America would be a lot better off today if Melania were president?

Melania Trump is having a hard time distancing herself from the president
I recalled when angels had cured me of MRSA in 2004, in Key West, after my doctor, an infectious disease expert, had told me that he had talked with doctors all over America and Medicine had no answer to MRSA, which was pandemic in Key West and the Florida Keys at that time and even today.

I wondered how the Alabama-Georgia game would end? For if Alabama lost, would not that water down (shoot holes in) God healing Coach Saban, so he could coach his team last night?

By the end for the first half, I figured Georgia's offense was unstoppable and would outshoot Alabama in the second half. However, this below is the short version of how the second half went.

In Christendom, 2 is the number for Jesus.

During a post-game interview, Coach Saban said he had tested positive twice on Wednesday, and had tested negative five times over the next 3 days, ending yesterday morning (Saturday). He said he had received well wishes and prayers from all over America, and perhaps that helped. He believed in such things.

Georgia scored a touchdown and extra point and went ahead 24-17. Georgia kicked off and Alabama got the ball with 37 seconds left, in the first half, as I recall. Alabama's quarterback moved his team to long field goal range with 3 seconds left on the play clock. He took a snap from enter and spiked the ball as time ran out and Georgia headed to the locker room, ahead 24-17. Coach Saban asked for an official review, which resulted in Alabama having 1 second left on the play clock. 1 is the number for the Father in Christendom.

Alabama sent in its field goal kicker. For years, Alabama has been plagued with missed field goals and extra points. Yet, from 52 yards out, their place kicker drove the pig skin just inside the left upright, to make the score, Georgia 24, Alabama 20. Alabama won the 2nd half, 21-0.