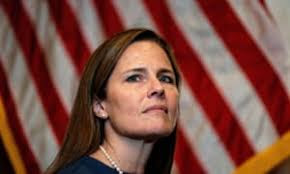 From a childhood friend yesterday, who describes himself as a moderate Republican that voted for Hillary Clinton in 2016 and calls President Trump "The Orange Turd".

I opened the link, read the article, replied to my friend this morning:

A good friend knows a fellow who attended law school with Barrett and said of her that she's a really great person. I imagine she will be confirmed, but who knows for sure?'

I spent a lot of time ruminating on Barret after reading the article you sent. I don't know if any of what follows will ever see the light of day.

Amendment 1:  Congress shall make no law respecting an establishment of religion...

Alas, does not apply to U.S. Supreme Court establishing a religion, despite the Founding Fathers, especially Thomas Jefferson, being flat opposed.

When Barrett is questioned before the U.S. Senate, I wonder if she will abide by this below? (I'd put the same to president and vice president debate candidates.)

33 Again, ye have heard that it hath been said by them of old time, Thou shalt not forswear thyself, but shalt perform unto the Lord thine oaths:

34 But I say unto you, Swear not at all; neither by heaven; for it is God's throne:

35 Nor by the earth; for it is his footstool: neither by Jerusalem; for it is the city of the great King.

36 Neither shalt thou swear by thy head, because thou canst not make one hair white or black.

37 But let your communication be, Yea, yea; Nay, nay: for whatsoever is more than these cometh of evil.

There are a number of questions I would put to Barrett after reading the above to her:

Do you think American corporations have the same Constitutional Rights as American citizens?

Do you think all Americans are entitled to affordable health care?

Do you think the Affordable Care Act is illegal?

Do you know the parents of any children killed in school shootings?

Do you think gun restrictions should be further loosened? If Yes, explain.

Do you think gun restrictions should be tightened? If No, explain.

Do you know when a soul attaches to a fetus? If Yes, explain.

Do you know if there is any authority in the Bible for when human life begins? If yes, explain.

Are you familiar with Genesis 2:7?

When does a human baby take the first breath of life?

Do you oppose Roe v. Wade?

Do you oppose early term abortion?

Do you oppose abortion if the father has abandoned the mother?

Do you oppose abortion if the mother's life is at risk?

Do you oppose abortion of pregnancies caused by incest or rape?

Do you oppose abortion of damaged fetuses?

Have you ever tried to prevent an abortion by offering to adopt the unwanted baby after it was born? If yes, explain,

Do you know any pro-lifer who offered to adopt an unwanted baby to prevent an abortion? If Yes, explain.

Did you ever offer financial help to a mother that wanted to have an abortion, to encourage her not to have it? If Yes, explain.

Do you know any pro-lifer who offered financial help to a mother that wanted to have an abortion, to encourage her not to have it? If Yes, explain.

How do you think it might go for for babies born to mothers who do not want their babies?

Have you ever heard of abused children having troubles later in life? If Yes, what kind of troubles?

Do you promise God on a Bible that you will not once allow your personal beliefs influence any Supreme Court case in which you become involved?

Amy Coney Barrett refused to say if Trump can delay the election. The correct answer is he can’t.

The question has an easy, straightforward answer. Barrett didn’t provide it. Only Congress can delay a presidential election.
https://www.vox.com/2020/10/13/21514394/any-coney-barrett-confirmation-hearing-feinstein-trump-delay-election

Heard that, too. W-H-O-R-E. Would say same about her if she was a Democrat and equivocated her answers. Felt that way about Kamala Harris when she equivocated answers during the vice-presidential debate. Am reminded of a black Texas fellow, some sort of personality, can't now recall his name, but I'll never forget him saying, Going to church has as much chance of making you a Christian as sitting in your automobile in your garage has of making you an automobile.