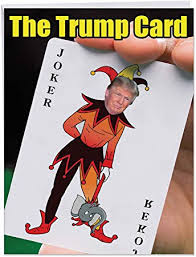 I woke up this morning wondering what, if anything, I might publish at this blog today? I had something in mind, but I didn't feel really motivated. So, I fooled around for a while and then took a nap and saw a really good friend of mine, who is a staunch Donald Trump supporter, about whom you will read more later in this post. I woke up and into my thoughts sprang, "When In doubt, lead trumps," which is an ancient defense strategy in the card game, bridge. So here is the first trump lead, on which I was sitting before the nap, after which I went online and found the second trump lead, which follows the first trump lead 😎

Just imagine.. right now.. Trump hired some Russian to do a fake dossier on Biden and used the FISA court to spy on Biden’s campaign. Imagine? And, if he lost & left office people loyal to Trump used it to try and impeach Biden. Just Imagine.
8

From the not very bright side!! Just making up more fairytales