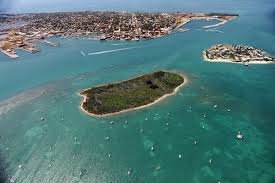 Was called yesterday by my Key West friend Arnaud Girard, who, with his wife Naja, investigate for and publish boat-rocking Key West the (Blue) Newspaper (thebluepaper.comm). For a while I rented an apartment in there home.
Arnaud called to say the United States District Court had ruled that the United States of America owns Wisteria Island, which sits about a mile northwest of Key West. Later yesterday, I read the blue paper article about it down below.
Last night, a former several-term mayor of Key West, now city commissioner, asked me to run for mayor of Key West this year. Then, Naja was trying to entice me into doing something. I woke up  this morning figuring I was going to write on my blog today about something going on in Key West.
I reopened the the blue paper article and saw reader comments that got my juices to running, and you can read all about that in reader comments under the article. Just one of many examples of the kind of stuff members of the local Resistance and I got into while I lived in Key West and just above there, starting early 2006.
BREAKING NEWS*** 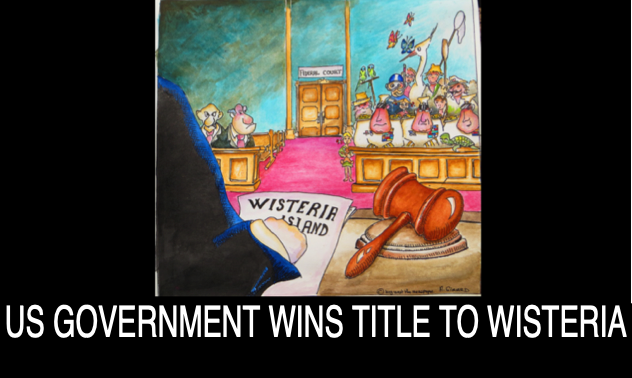 Well, it’s been a long time coming. But here it is. Federal Judge Jose Martinez granted the United State’s Motion for Summary Judgment and cleared the title to Wisteria Island in favor of the government.
CLICK HERE to read the Order for yourself.  [The Bernstein’s corporation [FEB] has 30 days to decide whether to appeal the ruling to the Eleventh Circuit Court of Appeals.] 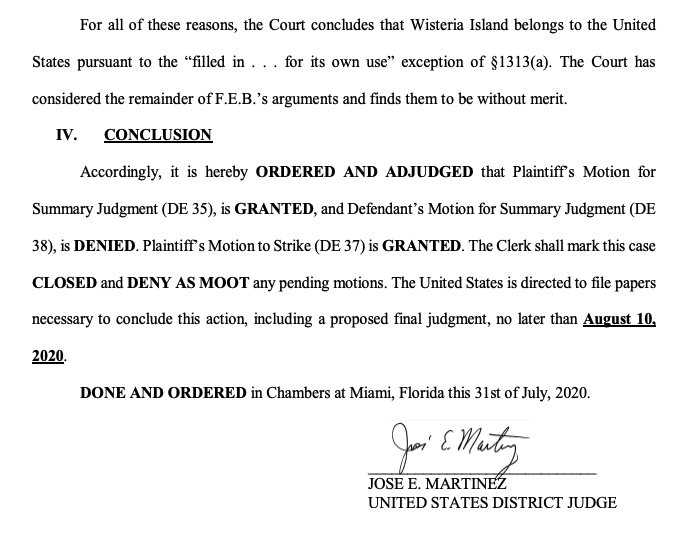 CLICK HERE for some of our previous coverage if you’re not familiar with the Wisteria Island title dispute.
This is a developing story…
[Cartoon illustration by Arnaud Girard]

Richard Boettger
Hooray! Way to go, Naja and the Blue Paper! A lot of work, rewarding to the people of not only the Keys, but the U.S.

Wendy Coles
Best news in a long time. Thanks so much for your perseverence! Nils is celebrating!!!

Naja Girard d'Albissin
Hi Wendy! Wish I could give him a big high-five and a hug right about now! Always in our hearts.

Sloan Bashinsky
Naja Girard d'Albissin Well, Naja, look at what you and Arnaud went and did, and along the way I heard you were accused by the Bernstein side of the naval battle of being a witch. I hope you and Arnaud will write for blue paper readers your own account of how you dredged and dredged and dredged the history and facts, and dredged some more, that became your presentation to BLM, as I recall, who initially declined to act, but you did not give up, and finally BLM said it agreed with you and laid claim on Wisteria Island for the United States, from which ensued the United States District Court case filed by F.E.B., which F.E.B. lost on the statute of limitations, and then the case filed by the United States, which F.E.B. lost on the merits. All in the wake of the Bernsteins trying to turn Wisteria Island into Sunset Key Deux, which naval battles traversed, not favorably for the Bernsteins, the Key West City Commission and a voter referendum, then the Monroe County Commission, then back to the Key West City Commission, and then back to the Monroe County Commission. Actually, I think there is a stranger than fiction book there.

Ed Russo
Someone needs to develop a conservation mitigation plan to properly protect and monitor the island.

Sloan Bashinsky
Let me tell you a story, Ed.

Before the first U.S. District Court filed, by F.E.B., after F.E.B. had not fared well before the county and city commissions, it came to me out of the blue to suggest to Todd German and Jim Hendrick that they pass along to the Bernsteins what had come to me from out of the blue. Jim was the Bernstein’s legal field Marshall for turning Wisteria Island into Sunset Key Deus, and Todd was a friend of the Bersteins, who had taken me out to Wisteria and we walked around it to persuade me that turning Wisteria into Sunset Key Deux was a good thing to do. After walking around Wisteria with Todd, I said this place reminds me of places where I once hunted in Alabama. I asked Todd to run me around nearby Sunset Key in his skiff, as I had not been on or even near that spoil island the Navy had built and used to store fuel and called it Tank Island. So, we did Sunset Key next. Todd asked what I thought? I said I didn’t see a stick of natural vegetation on the island, the architecture of the upscale residences was redundant, and it all looked like it was created by a plastic surgeon. Todd then took me some distance eastward to Demolition Key, another spoil island the Navy once built and later used to test explosives, thus its name. Demolition Key was covered with vegetation and was a rookery for pelicans and other sea birds. It was beautiful It was illegal to set foot on. I told Todd that Wisteria Island some day could be just as beautiful, if it was left alone. (to be continued)

Sloan Bashinsky
Now, the Bernsteins were linked up with the Walsh family, which had developed Sunset Key. The two families were going to make Wisteria Island into Sunset Key Deux. The Washes also had build a posh hotel adjacent to Mallory Pier, and the Washes had build posh seaside resorts on the Eastern Seaboard of America. Not far from the Walsh’s posh hotel next to Mallory Pier was Truman Waterfront, which had been built by the Navy from dredged spoil. Next to that part of Truman Waterfront was a lagoon harbor that once was a major Navy submarine base. The thing that came to me from out of the blue was that the Bernsteins’ give Wisteria Island to the City of Key West, as a public part in perpetuity, which would require a city voter referendum to approve. In exchange, the City of Key West would give the Bernsteins and the Walshes a few acres of Truman Waterfront property on which to build another posh hotel and marina, and the city would get 1 percent of the annual gross revenues of the hotel and marina, which also would require a city voter referendum to approve. I asked Todd German and Jim Henrick to run that by the Bernsteins and never heard anything back. When I later mentioned the swap to Key West Attorney Michael Halpern and said it was a win-win for everyone, he said it was a brilliant idea. Halpern and I seldom agreed on anything. (to be continued)

Sloan Bashinsky
Again, that was all before Naja Girard went to dredging up what she eventually presented to BLM, which led to the federal court lawsuits, which would not have happened if the swap had occurred with city voters’ approval. I was promoting Wisteria Island be made into a day and night tent camping park, with a small store and primitive campsites, a ranger station, all powered by solar, water collected in cisterns for showers, aerobic sewerage plant, a nude beach on the west side of the island out of Key West’s view. There would be a Wisteria Island Society, Wisteria Island t-shirts, caps, etc. sold in the store, along with basic camping supplies. A ferry would run back and fotth to the island from Mallory Pier, 8 a.m. to 10 p.m. The long history of people squatting on and trashing Wisteria Island and its waters would come to an end. Instead, the United States owns Wisteria (for now),. U.S. Fish & Wildlife never wanted to take over Wisteria Island. The island is a hang out for squatters and boats that might be polluting the water with what liveaboard people put into the water. It’s a real mess, and I wonder if the United States should offer Wisteria Island to Key West as a public park in perpetuity?

Rick Williamson
Okay, the government made a mistake. In the section where they wrote about the "Facts" they wrote, "It is not a natural island, but rather was formed as a result of dredging operations performed under the auspices of the United States Navy (“Navy”) in nearby Key West Harbor during the first half of the nineteenth century". We are in the twenty-first century. What they are writing about took place between 1900 and the 1950's. That is in the twentyth century. I wonder what else they got wrong.

Sloan Bashinsky
This once upon a time lawyer, who clerked for a United States District Judge before he practiced law, agrees that "nineteenth" should have been "twentieth". I figured the Court (not the Government} meant the 1900s, and that is seen in this part of the Court's (not the Government's) opinion:
~~~~~~~~~~~~
"In this connection, both sides agree that Wisteria Island was “filled in” as a spoil deposit in conjunction with a dredging project in Key West Harbor from 1941-1943
conducted under the auspices of the Navy."
~~~~~~~~~~~~~~
Whether or not U.S. District Court Judge Jose Martinez (not the Government) made substantive mistakes in his Order, which wrongly deprived FEB of W/isteria Island, is for the 11th Circuit Court of Federal Appeals to determine, if FEB appeals Judge Martinez's Order. Theoretically, the final say could come from the United States Supreme Court some time in the future.

Christine Russell
“Never doubt that a small group of thoughtful, committed, citizens can change the world. Indeed, it is the only thing that ever has.”
sloanbashinsky@yahoo.com
Posted by Sloan at 11:49 AM