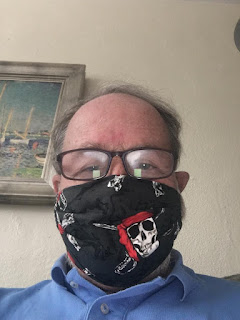 A dear old Alabama Law School buddy, who went on to be a country trial lawyer in south Alabama, then circuit court judge, then back to trial lawyer, told me in a dream last night that I needed to publish a white not particularly nutritious pastry I was sitting on.

I think maybe it was now departed from these premises Sancho Panza who introduced me to The Patriot Post (patriopost.us) some time ago. A free no paid advertising conservative blog and audience, mostly white men apparently, published by self-described patriot Mark Alexander. After reading the piece below by the managing editor, and some of the reader comments, I posted a comment that seemed to have the effect of a fox visiting a hen house.

The coronavirus lockdowns and mandates weren't severe enough, Democrats are increasingly asserting. At least that's the fundamental idea behind their recent statements.
"The one thing we do know," insisted Joe Biden, is that "masks make a gigantic difference. I would insist that everybody in public be wearing that mask." Would he use the heavy hand of the federal government to mandate it? "Yes, I would from an executive standpoint," he replied. "I would do everything possible to make it required that people had to wear masks in public." Nancy Pelosi heartily agrees, calling a nationwide mask mandate "long overdue."
The debate and inconsistent messaging about masks have been roiling since the beginning of the pandemic. What's uniquely interesting — and alarming — about Biden and Pelosi's comments is that they reveal yet again the default for leftists on any issue is to mandate things as far up the power structure as possible. These are the people, after all, who passed a law unconstitutionally mandating that Americans buy health insurance.
While states and local governments may have the authority to mandate masks (or other such things), the federal government decidedly does not. "This is what we call federalism," observes The Resurgent's Tom Searl. "If you watched the Democrats the past few years this may be a foreign concept to you."
Indeed, Democrats use every opportunity to consolidate power in Washington, DC. Ironically, this is why Donald Trump vexes them so much. Mandating masks at the federal level would be unconstitutional. It would trample the Ninth and Tenth Amendments — individual liberty and the power of the states and the people. But, because Democrats would be doing this "for your own good," they feel obliged to do it.
"Of all the tyrannies, a tyranny sincerely exercised for the good of its victims may be the most oppressive," said C.S. Lewis. "It may be better to live under robber barons than under the omnipotent moral busybodies. The robber barons cruelty may sometimes sleep, his cupidity may at some point be satiated; but those who torment us for our own good will torment us without end, for they do so with the approval of their own conscience."
If the government can order individuals to purchase a product (health insurance), then the government can mandate all sorts of things "for your own good." As the late Justice Antonin Scalia said during the Supreme Court's hearing on ObamaCare, "Everybody has to buy food sooner or later. Therefore, you can make people buy broccoli." His remarks became symbolic of the leftist busybodies' power grabs. Eight years later, it's not broccoli but masks. Either way, it's the same authoritarianism that endangers American Liberty.
sloanbashinsky@yahoocom