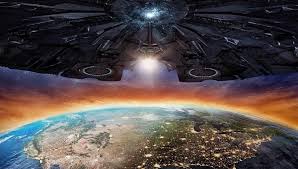 Key West/Lower Keys amigo Todd German responded to yesterday's post at this blog: Since it does not appear Covid-19 will wipe out humanity, perhaps ETs will save Earth from Earthlings?

I want to believe!

I opened the links, read the articles, replied:

Seeing an alien spaceship goes past believing to knowing, Then, the inferior-scared-trumped-by-aliens human government sends in the spin artists.

The end of the article you sent is what most interests me. Is it possible President Trump means, “ETs are real, but I can't just come out and say it and get killed politically.” Or, is Trump that far out of the loop in his own intelligence agencies?

One of the videos was taken in November 2004, while the other two were filmed in January 2015, though they have been circulating since 2007 and 2017 respectively following an unauthorized release, the Pentagon said in a press release at the time.

While the videos had been leaked prior to their authorized release, the DOD said that it was releasing them in an official capacity "in order to clear up any misconceptions by the public on whether or not the footage that has been circulating was real, or whether or not there is more to the videos."

Donald Trump commented on the clips in an interview with Reuters later in April, suggesting he was skeptical about their validity.

I tend to think you first idea, “Is it possible President Trump means, “ETs are real, but I can't just come out and say it and get killed politically.” is on the right track.

If you notice, both Marco Rubio and Harry Reid don’t seem to be denying these craft or whatever they are exist but rather the question is to their origin.

Obviously if the origin is alien in nature it would be one of the greatest events in human history.  But even if they are not alien, the fact that someone on earth has technology far greater than ours would be quite the conundrum indeed.

I have read much on this over the years, some to include wild ideas of time traveling humans, interdimensional beings, even angels, and/or demons.

I really hope time will tell.

Another important question which, is most likely behind the delay, if in fact there is something to all this would be, “can we as a race, handle the truth?”

My numerous excursions into Key West/Florida Keys politics proved to me yet again that humanity on this planet, in the main, does not deal well with reality.

What most puzzles me about the various ET species gathered around Earth is why mostly they remain in the shadows? Why have they not simply come forward like what happens in most sci-fi movies? I think you are right. Humanity would wig out. Well, given how things are going, and given the rate at which humanity is killing the planet, perhaps wigging out might be too easy on humanity. Perhaps being captured and put on slave ships and transported to a planet where dinosaurs are the dominant sentient species and the transported humans are the karmic new food supply to divert the carnivore dinosaurs away from hunting and eating alive their vegetarian cousins would be fitting karma for all concerned?

sloanbashinsky@yahoo.com
Posted by Sloan at 9:42 AM