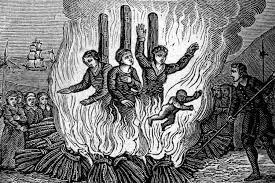 Yesterday's world Covid-19 savior Dr. Vladimir Zelenko vindicated but not given credit during Front Line Doctors demonstration before U.S. Supreme Court Building yesterday post at this blog centered around Stella Immanuel, M.D.'s electifying address before the U.S. Supreme Court building two days ago, which went viral pronto on YouTube.  In her address, Dr. Immanuel said she cures Covid-10 patients with hydroxychloroquine, zinc and azithromycin, which is the cure developed by Dr. Zelenko early this year. Dr. Immanuel did not mention Dr. Zelenko in her address. YouTube then took down the video, and Facebook and Twitter joined in.

Yesterday, retired Lucent Technologies scientist Sancho Panza sent this link to a sermon by Dr. Stella Immanuel, who also is a pastor:

Me to Sancho:
No way I can watch that whole thing, but I have heard somewhat similar sermons in white pentecostal churches. Pastor Stella Immannuel, MD, being African native, may have vodoo-origin roots mixed into her Christian theology. Like happened to Zelenko, the witch hunt is fully in progress. Perhaps Dr. Immanuel might benefit from a little Voodoo mixed in with her incantations for Jesus to shut down Facebook for messing with her Facebook? You're from the Dominican Republic. I think there might a bit of Voodoo there? Or was that only over the dividing line in Haiti?

[The link is for a video of Dr. Immanuel fielding bystander questions in front of the Supreme Court building, I suppose after she delivered her address.]

Me to Sancho:
Yeah, that's where I screwed up. I became a lawyer. That didn't work out, my life went to shit. I told God I didn't want to die, failed, please help me; I offer my life to human service. Jesus and Michael came and woke me up in the wee hours, told me, "This will push you to your limits but you asked for it and we are going to give it to you." I saw a white flash as I was jolted by something electrical. Two more times that happened. Jesus and Michael faded out. Then, they set out to prove they had lied by pushing me way beyond my limits. Yeah, I should have gone to medical school, but I didn't have the smarts for chemistry and science and math, and I didn't have any better sense to be careful what I asked God for.
First an orthodox Jew male doctor. Then, an African pentecostal back female doctor. Wonder what God's next messenger will look like? A Muslim, or, better, an Atheist?
Hee, Haw!!!

Sancho:
I am so pissed right now... Tucker Carlson on Fox just finished doing a portion of his show about this very case and at the end, he fucks it up by bringing in a "Doctor" to discuss the "latest" double study on HCQ which he says show that it doesn't work... but they don't explain that these studies were done without Zinc, WTF? Why wouldn't he interview some of the Front Line Doctors in the actual video, including Dr. Immanuel?

Me:
Maybe Tucker needs Dr. Immanuel to exorcise him? Maybe Tucker and FOX are on the Big Pharma large donations list? Maybe Tucker is an idiot? At least President Trump and his son Donald Jr. tweeted the Dr. Immanuel/Front Line Doctors video, which Twitter and Facebook then went after with sharp knives. You are right. It's 1984 in, I would add, a bizarre inbred twist with One Flew Over the Cuckoo's Nest.


I confirmed that just now by trying to open the links you sent the other day and this came up: "False Information, Reviewed By Independent Fact Checkers." I wonder what kinda incantations, spells and prayers Dr. Immanuel uttered? I wonder what kinda karma the "independent fact checkers" created? I wonder what's gonna happen in America and anywhere else people with C-19 are not treated with Dr. Zelenko's cure (200 mg. hydroxychlrooquine twice a day, 220 mg zinc once a day, 200 mg azrithromycin once a day) after C-19 symptoms appear?
Dr. Zelelnko recommended substituting 1,000 mg quercetin to replace hydroxychloroquine. So, if that word goes viral, maybe there is hope for people who are not brainwashed by Big Pharma/AMA/FDA/CDC/WHO.
I'm taking 25 mg. zinc and 500 mg. Vitamin C when I turn in at night and they have less competition from food digestion for a good while. If I start showing C-19 symptoms, will go to 1,000 mg quercetin, 225 mg zinc and 1000 mg Vitamin C, which acts syngistically with quercetin and zinc. The entire world could to that, but my goodness am seeing virtually zero interest on Facebook.
Am reminded of the joke about the fellow stranded by a flood on the roof of his home, and three times people tried to rescue him and he declined, saying God would rescue him. The water rose, he drowned, went to heaven and complained to God about not rescuing him. God pointed out the three rescuers God had sent.

A friend said she watched that Tucker Carlson show and he defied YouTube and aired some of the censored Front Line Doctors video. I found that Carlson show online and it contains three segments from the banned front Line Doctors video: (1) A white, male doctor saying children are not known to vector Covid-19 to adults, ie. school teachers; (2) African doctor Stella Immanuel saying there is a cure - hydroxychloroquine, zinc and Zithromax (azirithromycin); (3) Dr. Immanuel taking on the medical establishment and Dr. Fauci.

July 29, 2020
Dear God in Heaven please help us. This is the woman Trump says can save us from Covid? I am on a bad acid trip.

The Houston doctor who was part of a controversial viral video touting hydroxychloroquine as a "cure" for COVID-19 has said certain gynecological issues are caused by sexual encounters with demons in dreams, along with other dubious medical claims. The Daily Beast has published an extensive collecti...

CBSAUSTIN.COM
Report: Texas doctor who went viral with unproven COVID-19 cure believes in 'demon sperm'
The Houston doctor who was part of a controversial viral video touting hydroxychloroquine as a "cure" for COVID-19 has said certain gynecological issues are caused by sexual encounters with demons in dreams, along with other dubious medical claims. The Daily Beast has published an extensive collecti...

The Houston doctor who was part of a controversial viral video touting hydroxychloroquine as a "cure" for COVID-19 has said certain gynecological issues are caused by sexual encounters with demons in dreams, along with other dubious medical claims. The Daily Beast has published an extensive collecti...