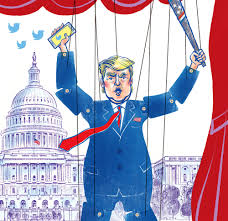 A Florida Keys buddy responded to yesterday’s I will vote for President Trump if he fires his FDA director and offers pardons to American doctors and pharmacists who give hydroxychloroquine and zinc to patients infected with Covid-19  post at this blog:

Hi Sloan,
Hope that you are joking saying that you would vote for trump. Anyone who would vote for that idiot is one themselves !!!
Stay safe and healthy !!!
L
Me:
Hi, L-
Thanks to Dr. Fauci, CDC, FDA director, WHO, Medical-Industrial Complex, brainwashed Americans, Americans who won't wear masks, etc., Covid-19 is doing a great deal more damage to America than President Trump, if you don't factor in President Trump is the one person in America who has the power to pave the way for Dr. Zelenko's cure to be given to anyone in America presenting Covid-19 symptoms, verified by tests or not. Instead, Trump turned his attention to far more trivial matters than saving America, its economy, society, etc., and it don't look like you need to fret about me voting for him :-).
Sloan

L
I know that you are a smart man. And, in reality, I knew in my heart, that you would not consider the idiot trump.
God Bless and may the angels continue to guide you !
Peace and Kindness !!!!!!!

Me:
I swan, Larry, could Trump be a secret agent for Red China or Putin Russia?

L
Trump surely acts like an agent for them. he is a scary being !!!
Hugs,

Me:
His real boss is scarier. Lucifer.

L
Lucifer is correct. And trump is fooling too many Christians !!!! Among other ignorant people !
Hugs,

Me:
Hard for me to believe they really are being fooled, but I suppose God wants me to at least give them that benefit of the doubt.

Sloan you old Angel-Addict, you are offering perhaps the best science of anyone reporting on our pandemic.
It has been especially important that you have stayed with the drug combo.
With your helpful reporting, I have stayed with the science (I don't know if I ever told you, my first three years of undergrad work was at MIT in physical chemistry).  In New York, because of the reporting by the reclusive Jewish doctor, the governor (I believe) ordered a study at his most prominent medical lab at NYU.
The results are a stunning 44% drop in deaths.
Below is the beginning of the report from, sadly, May 12.  I'm pretty sure you have reported it before and have read the whole thing, but it bears repeating.  The critical issue, as you have repeatedly reported, is the zinc, for which the hydroxy serves as mainly a catalyst. The regular media reports only on the non-effects of the catalyst alone, which, duh, are nil.  I have not seen this study including the zinc mentioned in any of our major media (have you?):

By Alyssa Paolicelli New York City
PUBLISHED 7:18 AM ET May. 12, 2020 PUBLISHED 7:18 AM EDT May. 12, 2020
SHARE
NEW YORK - Researchers at NYU's Grossman School of Medicine found patients given the antimalarial drug hydroxychloroquine along with zinc sulphate and the antibiotic azithromycin were 44 percent less likely to die from the coronavirus.
"Certainly we have very limited options as far as what we have seen work for this infection so anything that may work is very exciting," said Dr. Joseph Rahimian, Infectious Disease Specialist at NYU Langone Health

Me:
Thanks, Rick -
The NYU study looks like another hospital study. By the time Covid-19 patients get to hospital, they are a bit or more sicker than the patients treated by the New York doctor Zelenko who developed the cure and was healing his non-hospital patients in 5 days with HCQ, zinc and azithromycin, with no fatalities, no serious side effects, no reason in heaven and hell to take that cure off the market, but the FDA director did it and Trump did nothing, which caused me to wonder if Trump not only is an idiot or wants heaps of Americans to get sick and maybe die or have lasting lung damage, he owns a lot of stock in Big Pharma companies trying to develop an expensive vaccine or cure.

I passed your comment along to retired nurse Peggy Butler, with this comment:
Humanity suffers immense brainwashing, Peggy. I have had the same discussion with a virologist, whose objection to using HCQ on Covid 19 was, it initially created a shortage of HCQ and he knew lupus patients who had trouble getting their prescriptions filled; and he was worried about the side effects, he might get a heart attack and that was enough not to take HCQ even if Covid 19 was killing him. Sadly, you remind me of him.

A professional psychic, who voted for Trump in 2016, commented under yesterday's post at this blog:

Gloria ReiserJuly 5, 2020 at 1:49 PM
I wish I had not lost the links for what I'm about to say, and I will see if I may be able to locate those links to provide later. The links were regarding studies that supposedly prove Hydroxychloroquine and zinc ineffective or causing harm. The issue is that one study used only 25mg of Hydroxychloroquine + zinc (and proved ineffective), while another, the study showing increased mortality, used a toxic amount of hydroxychloroquine (resulting in increased mortality). Another study - published in Lancet and the New England Journal of Medicine - obviously without any vetting or even critical thinking, was called out and proven totally bogus! How any scientist could justify those studies as equivalent and disproving of Dr. Zelenko's formula is beyond me. They are not equivalent.
We know that zinc can shorten the duration of the common cold (coronavirus). Zicam proved that 2 decades ago with their original nasal swabs. The thing was that directions read you were to insert the swab just inside each nostril, pinch the nostril and swirl the swab around. I think usage was 4x per day. It worked. Zicam would stop a head cold in its tracks in 24 hours or less for me. Instruction plainly stated NOT to insert a swab deeper into the nostril nor to sniff the medication up higher into the nostril. And yet by the time less than 100 people failed to follow clear instructions.... and reported impairment of sense of smell, the swabs were pulled from the market. Zicam swabs are available under new formula that does not contain zinc. They are not very effective at all. Zicam is also available in tablet form including zinc .... however oral Zicam is upsetting to the digestive track, and fewer individuals opt for that form. There was a Zicam in the form of tiny pellets to be dissolved under the tongue, that worked nearly as well as the nasal swabs (the formula included zinc), and yet it seems to have disappeared as well. I wonder WHY? Thus a quick easy fix for the common cold became virtually unavailable.
Consider the medical cost of visits to walk in clinics, urgent care or a general physician by those seeking to shorten duration of their head cold so as not to have to miss work and other events while ill. Some fortunate individuals are able to navigate a head cold without missing a beat. Others of us may be felled for five days to a week or more. Should those who are capable of following directions for a medication be penalized because of those dim bulbs who don't or won't? It certainly is not the case regarding expensive prescription medications. Big Pharma.... pffft!
And now we have a virus more dangerous.... and again, hell no, we can't have zinc with the push (hydroxychloroquine) that gets it INTO cells to do its work.
SloanJuly 5, 2020 at 4:06 PM
Sounds about right to me, but the obvious push by Dr. Fauci, CDC, the FDA director, WHO, BigPharma, Medical Industrial Complex, brainwashed Americans to let Covid-19 destroy America (economy, social fabric, etc.) aside, the fact remains, the guy you voted for in 2016, Donald Trump, could turn the entire thing around, but he went off chasing far more important things, like holding large public maskless gatherings. I swan, I wonder if Trump is a secret agent of Red China or Putin Russia?
Gloria ReiserJuly 5, 2020 at 7:01 PM
I wonder.... COULD Trump have a ghost of a chance really turning anything around when everything he's tried to do has been blocked and decried WRONG from day one? Or would he just be obstructed and blocked again? Remember when he wanted to close the border to people coming in from Wuhan? There are some powerful forces with major skin in this game. They want him OUT and they want expensive pharmaceuticals and a mandated vaccine to be the fix for Covid 19 aka SARS-CoV-2.
As for Trump and events, do you recall Nancy Pelosi's much publicized visit to China Town? As only one example of the DNC's stance re Covid early on, as compared with Trump's. Nobody's got it right yet. As for those favoring masks (I am one of those) and those refusing to wear a mask.... some of those are on the left, some on the right.
We will see how things go when the Deep State has regained full control, which barring some major event shifting the current energy stream will Take place in January.
SloanJuly 5, 2020 at 7:42 PM
Trump is president, he hires and fires at will. The issue is not can he turn anything around? The issue is, he has in his paw a cure for most Covid-19 infections and he let his FDA director ban that cure and get away with it. I'm looking at this politically and spiritually. Trump is the only person in America with a chance of providing that cure to America. He is on trial in God's court about that. Human courts, public opinion and otherwise, are blind to his crime, and you are one of his accomplices, since you do not call him to task.
Gloria ReiserJuly 6, 2020 at 1:42 PM
Hehe... it don't have a direct line to the President of the U.S., unfortunately. But he is not the ONLY one "on trial in God's court" as you put it .... racking up some MAJOR KARMA in my lexicon.
SloanJuly 6, 2020 at 2:49 PM
We all are on trial in God's Court. You keep giving Trump a pass at this blog on his blowing the "miracle" God delivered to him via Dr. Zelenko. Nobody asked you to write to Trump, but you did vote for him, and that puts you in a different category from people who did not vote for him.

Gloria ReiserJuly 6, 2020 at 4:09 PM
And I'm good with that
sloanbashinsky@yahoo.com