Will there be a U.S. presidential election in 2020? 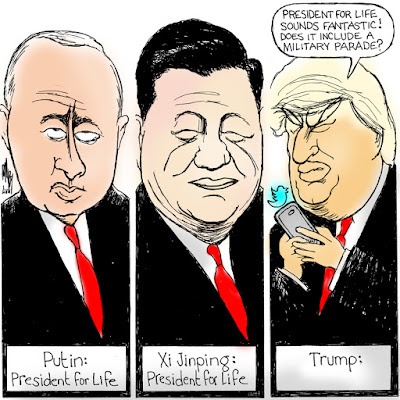 WASHINGTON — Jared Kushner, the president’s son-in-law and a senior White House adviser, refused on Tuesday to rule out postponing the presidential election in November, a comment that fed directly into Democratic concerns that President Trump might use the coronavirus crisis to delay or delegitimize the contest and one that contradicted Mr. Trump himself.

“I’m not sure I can commit one way or the other, but right now that’s the plan,” Mr. Kushner told Time magazine in response to a question about whether the election could be postponed because of the pandemic.

The opinion of a White House staff member has no bearing on when the election is held. Even the president himself does not have the authority to unilaterally postpone Election Day, which by law takes place the Tuesday after the first Monday in November.

But Mr. Kushner’s comment raised alarms both because of the expansive power Mr. Trump has conferred on members of his family who serve in his administration and because it played into the worst anxieties of Mr. Trump’s detractors — that the president would begin to question the validity of the election if he feared he was going to lose.

The presumptive Democratic nominee, former Vice President Joseph R. Biden Jr., gave voice to those concerns at a virtual fund-raiser last month. “Mark my words, I think he is going to try to kick back the election somehow — come up with some rationale why it can’t be held,” he said.

BEIJING — The comment was made behind closed doors, and appeared to be in jest: President Trump told donors on Saturday that China’s president, Xi Jinping, was now “president for life,” and added: “I think it’s great. Maybe we’ll want to give that a shot someday.”

The remarks, confirmed by a leading Republican lobbyist who attended the luncheon at Mr. Trump’s Mar-a-Lago estate in Florida, were first aired by CNN, which obtained an audio recording of his comments.

The statement, which drew laughter from those in attendance and was said by a smiling president, according to the lobbyist, was given on a day when Mr. Trump was out for laughs. On Saturday evening, at the annual Gridiron dinner in Washington, Mr. Trump jokingly said of possible talks with the North Korean leader, Kim Jong-un: “As far as the risk of dealing with a madman is concerned, that’s his problem, not mine.”

Nonetheless, the remarks appeared to be the first comments made by Mr. Trump about China’s decision to scuttle the two terms for its presidency — part of a remarkable consolidation of power around Mr. Xi — and Chinese analysts took them seriously.

At the luncheon, Mr. Trump also called Mr. Xi “a great gentleman” and “the most powerful president in 100 years,” who treated the American leader “tremendously well” during his state visit there in November.

That Mr. Trump left the impression of a positive endorsement of Mr. Xi was “unexpected” and “matters for China,” said Zhang Baohui, a professor of international relations at Lingnan University in Hong Kong.

“Chinese leaders care very little whether Trump is seen negatively outside China,” he said. “The U.S. still represents the reference point for China.”

The Trump comments would be especially welcome because Mr. Xi’s step toward dictatorship was a sensitive issue inside China, and one about which public discussion has been barred.

Mr. Trump, an admirer of strongman leadership, has prided himself on his good personal relationship with Mr. Xi, even as Washington differs with Beijing on major issues from trade to North Korea. Mr. Xi accorded Mr. Trump a lavish state visit to Beijing last November that the president has enthused about ever since ...

sloanbashinsky@yahoo.com
Posted by Sloan at 9:02 AM