bridging or being chaos in post traumatic shock America 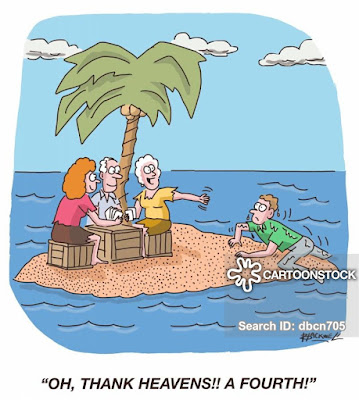 This is what I thought was coming but it will not be exclusive to Bridge Clubs.  All kinds of clubs will fall by the way side. What will we do?
What will be the solution?
Read below....

Bridge Was Their Passion. Then People Started to Die.
https://www.nytimes.com/2020/04/29/us/coronavirus-bridge-colorado-springs.html?referringSource=articleShare

I read same article online yesterday. Our bridge club acted quicker. We (and America) are in Post Traumatic Shock? I hope all players in our club are doing okay. I read the weekly club newsletter. Very well done.

A civic center, where I played chess each Tuesday morning with other oldsters, closed early on. Two popular restaurants I frequented for supper went to take out only. As did a popular coffee house, where lots of people gathered inside and outside at tables. Face-to-face social life exterminated until further notice.

I take lots of naps.

At night, I watch movies/serials on Netflix and YouTube. Have fantasies of the burglars in the “Home Alone” movie breaking into my apartment and we entertain each other.

Yesterday, I was in my apartment all but about 10 minutes, when I took a short walk. Typical day, unless pilgrimage to a grocery store for perishable foods (beef tips, yogurt, misso, coconut and almond milk, Chinese greens, which are fresher and more nutritious than green veggies in American groceries.) My larder is well-stocked with staple foods (nuts, seeds, dried fruit, brown rice, garlic, ginger root, cooking oils, curry powder, etc.) that don’t need refrigeration. Have ample toilet paper, paper towels and paper napkins.

Sometimes I walk to nearby park with a great non-fiction book I'm slowly reading, Stronghold, string my hammock between two trees, doze and read until my legs fall sleep and I have to leave or take up permanent residence.

Starting tomorrow, new city ordinance requires face masks in public, $500 fine for violation. I might ditch conventional and don homemade mask I made by butchering a perfectly good t-shirt. 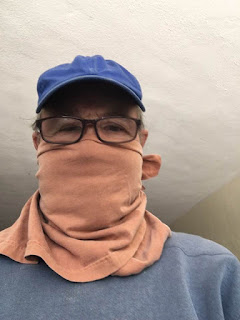 My older daughter texted this mask should reach me by end of this week, which was made by a someone where she lives. 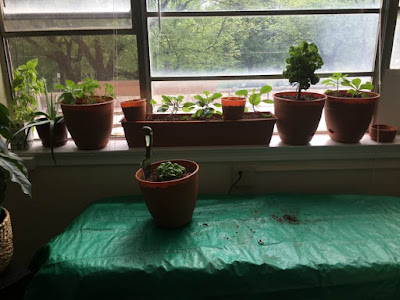 Before the world turned upside down, I had another life online and iPhone, which expanded after shut-down.

Had to open new Bridge Base Online account, because my old account was tangled with defunct email account. Filled out convention card, yet to use. Pick up casual bridge games, some good players, some players don’t know modern bidding basics, and mysterious robot partners and opponents.

Have not ventured playing online at our bridge club. Think I did all required to qualify, but don’t know if I, or my cranky laptop, up to playing 2 hours non-stop online. Complicating, the cursor sometimes sticks and wrong bid happens. Disaster. Same happens playing speed chess online, but that only blunders me.

Playing more chess than I ever dreamed possible at chess.com, against human opponents about my same wannabe great level - perhaps 2 on scale of 10. Watch world-class players at speed chess. Another chess universe entirely. Watch famous chess games from the past on You Tube.

An old internet buddy, retired scientist, who voted for Obama twice, became disenchanted and voted for Trump, dropped a bomb 2 days ago, Contrôle de sécurité nécessaire, which he said was banned from YouTube but still can be found on Facebook. The first fifteen minutes scientifically suggests why it was banned.

I replied to my internet buddy:

Watched about 15 minutes of the video. I think what this doctor raises was always the question. President Trump asked Dr. Fauci if the virus could be allowed to wash over America? Dr. Fauci replied that a lot of people would die. The first serious spirit guidance I received was, embrace or fight the tiger? The metaphor meant something to me who once did one or two rounds of Tai Chi daily and had some, not a lot, understanding of Taoist philosophy. The virus came from China, where Taoism arose ages past.

The doctor's point about quarantining healthy people is unprecedented, instead quarantine people infected with the virus and people at risk (old, sick, etc.), makes sense. That's why I holed up. That's why the bridge clubs I belong to closed. Their members are in their 50s, 60s, 70s, 80s, and even 90s. I saw an article today of a bridge club in Colorado that did not close early and there were infections and several members died and quite a few others still fighting for their lives.

President Trump was dealt a wicked bridge hand by China. China dealt the same hand to itself and to the rest of the world. So far, the planet and companies that profit from the virus are the winners.

Back to the doctor in the video. This virus is peculiar. Who knows at this point what its course will be? I think I can predict more or less what will happen if the economy is not reopened. Given how things were held together by bailing wire, so to speak, the economy may be too damaged to do anything but crash. That might bring on lots of deaths, too. Civil unrest. Martial law. I hope I ain't still here for grocery stores run out of food and/or Big Brother horror movie.

I publish most days at my blog, afoolsworkneverends.blogspot.com. and republish at Facebook. Sometimes get a comment or two.

My dreams continue to instruct and correct me about me and what I’m involved in, regardless of my druthers. I see no reports online about that happening to other people. However, sometimes I see indication that something online was inspired by Something.

I'm doing what's put in front of me, as I was trained by angels and am shown, corrected, re-directed, etc. That's the whole program. I have no clue where it's going. At least I'm living inside and have enough to eat and no bugs or police bugging me, so far.

sloanbashinsky@yahoo.com
Posted by Sloan at 10:49 AM