Will aliens save humanity from pyramid economics armageddon? 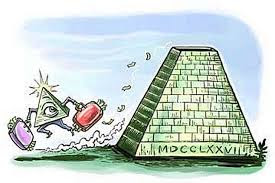 My Key West homeless amiga, now staying at home in a Florida City motel  room with a homeless man who still has some money, reported a dream last night, in which she watched a heap of, she estimated at least 200,000, black wedge-shaped spaceships taking on hordes of people riding escalators from the ground up to the ships. There was a great deal of arguing and fighting among the people, and armed human guards in blue uniforms were shooting people.

Do I take her dream literally? No. Do I see the dream as indication of how bad things are already and it will get worse? Yes. My friend has had too many predictive dreams and visions that came true for me to say it was simply a dream.

So, let's look at another not entirely exact science, economics, and let's use the most powerful nation as a proxy for the rest of the world.

While getting my B.A. in Economics at Vanderbilt, I learned about the "multiplier effect". Every dollar the economy generates "magically" transforms into many dollars as that dollar goes from hand to hand for goods and services.

The Multiplier Effect and the Simple Spending Multiplier: Definition and Examples - Video & Lesson Transcript | Study.com
The article also speaks of the impact of U.S. Government spending during a down economic time to stimulate the economy. Government spending sometimes works pretty well, but that model assumes the private sector pulls its share of the load. Not the case today. The multiplier effect is turned upside down, inverted. Its algorithm is running fast the other way. Backward. That will be catastrophic for the U.S. Government and average Americans and the stock market. And, it will be catastrophic for other countries, the world economy and humanity.

Received from a friend who has taught economics in colleges:

With the rate of inflation and injecting $1200 cash(and it isn't- taxes will be taken out 2021) into 240million American pockets, you create an inflationary shock. That means these people will be facing $8000-$18000 in lost wages as a minimum estimate. So we have another shock from people out of work. Offset $1200 against $8000 and you get $6800(negative) to $16800(negative). There is no way to replace those lost wages. So we have direct inflation from the Federal Reserve that causes $1200 in difference in the CPI(CPI goes up), while cash reserves and cash income to Americans is, well, FUCKED and NOT REPLACEABLE.

[The Consumer Price Index (CPI) is a measure that examines the weighted average of prices of a basket of consumer goods and services, such as transportation, food, and medical care. It is calculated by taking price changes for each item in the predetermined basket of goods and averaging them.]

I asked for further explanation, and received:

21.4 trillion is 2019 GDP(Gross Domestic Product). That makes rounds through all sectors of the US economy.
We needed that 21.4 trillion that we sacrificed this year for growth. If you run that through a growth model, like Romer has in Macro II, by the time that the GDP of 21.44 trillion makes the rounds to landlords, grocery stores, banks, small businesses- it creates a cash flow of roughly 124 trillion that moves through the economy.
The GDP is still 21.4 that creates that but, when it makes the rounds touching all the hands in business it inflates to 124trillion.
With the fact our GDP will be maybe 2 trillion to 4 trillion dollars in 2020? We'll be lucky to see that money make the rounds and touch 12-14 trillion in exchange.
So, 2021 is guaranteed to be a shit show because there has only been 12-14 trillion circulated in the economy, and there was only at most maybe 4-6 trillion GDP this year with all businesses cracked down.

[Gross Domestic Product (GDP) is the total monetary or market value of all the finished goods and services produced within a country's borders in a specific time period. As a broad measure of overall domestic production, it functions as a comprehensive scorecard of the country’s economic health.]

I don’t know if President Trump sees it that way, but he should, given his extensive business experience and degree from the Wharton School of Finance. I imagine all economists see the pyramid scheme, and that it suddenly got a great deal larger. The art of the deal and make America great again irony?

The American pyramid scheme mirrors pyramid schemes in countries around the world. If all those granite block piles have the bottom snatched out from under them and come tumbling down like trillions of Humpty Dumptys, all hell breaks loose on Planet Earth and black wedge-shaped space ships might show up in one form or another.

sloanbashinsky@yahoo.com
Posted by Sloan at 12:23 PM