At the rate humanity is destroying the planet Earth, I doubt humanity will be able to exist there in 100 years. Meanwhile, each person is going through the Earth prism to somewhere ... 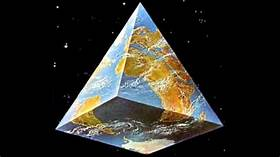 A splendid response to yesterday's Is Kundalini rising a spiritual or genetic experience civilization squashed?, followed by my reply:

Blacklight_of_EonsKundalini awakening creates a clear division between "before" and "afterwards", which can be compared to: "before" and "after" walking through a door outside of the house, "before" and "after" plugging a device into a power outlet, "before" and "after" going through adolescence, and so on.In other words, there is a clear shift in the quality of one's being, and there is a notable, big experience separating one's previous state from one's state after the Kundalini experience. It can be said that one establishes oneself in permanent state of spiritual awakening, while only being able to catch occasional glimpses of it before the Kundalini experience.This is not a supernatural feat (unless seen from a premature point of view) but a phase of growth a human being is capable of going through after reaching sufficient level of maturity. With proper effort, a human is capable of "cascade of adolescences". The reason people see something like this as supernatural and unimaginable is the same as why small kids see the capabilities of adults as supernatural and unimaginable.Some people have problems during the transition process, and this is because their growth proceeds asynchronously, some aspects evolving at too high of a speed for other aspects to keep up with those. It often depends on one's master and tradition to keep one's spiritual progress well-rounded rather than imbalanced.All the accounts you've mentioned describe the same process which is not trademarked by a particular religion, and so the slight differences in descriptions are attributed to each specific religious prism of interpretation used.The negative role of civilization can be summarized as the state of ignorance being embraced by our culture, hence the means of applying the correct effort in order to continue one's development being somewhat obscure and hard to find.Humans in general are not interested in evolution, just just like small kids are not interested in studying, for they already believe themselves to be the kings of the world.The majority of humans in our world are stuck at premature stages of evolution. Believing themselves to be at the peak and having nowhere to evolve, their attention is instead attracted to activities resulting in dissipation and degradation.As such, most of humanity does not act in a practical way but prefers to only gain wisdom through suffering.MeWell put.I have had tens of thousands (perhaps great understatement) of experiences with what most people cannot begin to imagine. Not once did I hear or see anything that I could objectively relate to Kundalini arousal or rising inside of me, nor generally. Not even after a woman I loved told me in a dream that I had married Kali (2002), and then my process became more intense relative to how I dealt with women and the feminine, nor in any of my dreams about Kali, did I hear or see anything that I objectively associated with the Kundalini.For me it simply was soul alchemy and how it had gone and would continue to go, even now, at age 79, in phases, each one different from the one before. Something beyond my conscious ability or control clearly was running the process and me. That something presented itself often enough as supernatural, in my lexicon, angels known in the Bible. As you paint, the person I was before it all began nearly ceased to exist, and a new person started emerging, in stages, still unfolding. There was no flash point, where I was asleep and then felt wide awake, as I have heard and read some people had experienced. It was a long, slow, grinding process, and still is.I was steered away from having a human master, often called a guru or spiritual teacher. That is a way to go about it. However, I had a number of people show up, who had masters, who wanted help weaning from the master; or who clearly needed that help, but were not open to it. Each of them were possessed by the master in the classical sense, and most were not aware of it. I also encountered many people who were possessed by opportunistic or even malevolent entities nearly always unawares. Groups of people were collectively possessed nearly always unawares. On top of childhood, cultural and any religious programming working silently away inside of them, or inside of anyone.In the spring of 1994, while I was in a dark night that had onset three years prior and would last another year, this came to me one day, which seemed to succinctly sum up my soul itinerary, at least.Earth,the sacred prismthrough which souls are refractedinto their elemental parts,purified in Holy Fire,then one-forged and sent on their wayto not even God knows where,simply because they are allunique emanations of God,evolving ...

PYRAMION_42Yes, the earth's solidest form is also known as matter. Our soul was born together with its ether body into the solidity of the material world. There are 2 ways that a conscious person can go. Either he decides to put life into the world and accompanies it and takes the lower path without going the path of self-redemption and at the end of his life comes back to the material earth again and again. Until he decides to go the 2nd way and experience himself. Here it comes to awakening in being, to recognize this for yourself and to work with the energies of body, mind (ether) and soul. The reunification of the chakras to detach the etheric body from the material body. Systematic growth on the way through the aspirant. Always in balance, of spirit, body and soul in the material, in order to dominate the planetary matrix in the visible and invisible .... At the end of this life, face the cycle of ascent or descent with joy. This cycle continues until we become awakened infinite consciousness and contain as pure energy our own place as our own universe in the infinite eternity of the primordial monad and the same numbers of the eternal development through our own infinite ether generated in the eternal development of the monad other energy beings than Let the soul contract experience infinitely long in our monad. Always remember, not we breathe, but the infinite universe consciousness breathes us. The body is just a shell that is made available to us to experience consciously over and over again as long as the game of ascent or descent is initiated by one. Therefore the path of self-redemption through the creation of one's own consciousness, through systematic growth, always on the way to ascent until the goal is reached and you yourself ...... From here the thoughts are free .... maybe until soon in 56,000 years .... LG AndreMe:LG Andre?56,000 years?At the rate humanity is destroying the planet Earth, I doubt humanity will be able to exist there in 100 years.Meanwhile, each person is going through the Earth prism to somewhere ...