I wonder if Democrats now wish they had run Joe Biden in 2016, instead of Hillary Clinton? 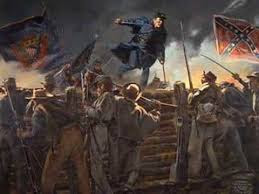 Excerpts from yesterday's letter from American historian Heather Cox Richardson. The full letter can be seen by clicking the link below the excerpts. My comment is last.

The determination of Republican-dominated states to retake control of state elections and cut from the vote those they declare undesirable—usually people of color—echoes the arguments made by those determined to get rid of Black voters during Reconstruction.

Insisting that lazy Black men were voting for lawmakers who promised them roads, and hospitals, and jobs—things that would be paid for with tax dollars, levied on white men—former Confederates insisted that Black voting redistributed wealth from white people to Black Americans who would use the services the states provided. Black voting, then, amounted to socialism. Such a system was corrupt, former Confederates said, and good Americans must reclaim their country by “purifying” the vote. They were, they insisted, reformers, eager to “redeem” the South from corruption.

As white vigilantes tried to force Black men from the polls, Republicans in Congress gave to the federal government the power to protect the civil rights of Black Americans, as well as the right to vote, in states that would deprive them of these rights. Congress passed the Fourteenth and Fifteenth Amendments to the Constitution and sent them to the states for ratification. The Reconstruction Amendments explicitly declared that “Congress shall have power to enforce, by appropriate legislation, the provisions of this article.” When white southerners continued to attack their Black neighbors, Congress did precisely that. In 1870, it established the Department of Justice to enable the federal government to enforce those rights in the states.

Quickly, southern whites changed their tune. They insisted they were discriminating against Black voters not on the grounds of race, but rather on the grounds of property ownership or education, criteria that northern native-born whites embraced as immigration from southern Europe increased in northern cities. After Mississippi wrote a constitution in 1890 that virtually eliminated Black voting, state legislatures across the country cut poor people, Black people, and people of color out of voting.

In 1898, white vigilantes in Wilmington, North Carolina, launched a coup d’état against the duly elected city government. The insurrectionists admitted that the government of Black men and poor whites had been fairly elected but, they said, such people should not be voters at all, because they would pass laws using tax dollars to help poor people in the community. White property owners were within their rights to refuse to be governed by such people, and they would never allow such a thing again.

In the process of taking over the government, they killed between 60 and 300 people, primarily African Americans.

In the 1890s, the federal government looked the other way as states suppressed Black voting, but World War II made lawmakers sit up and take notice of the silencing of American voices by state legislatures. Black and Brown Americans demanded a say in the democratic government they had defended from fascism, and in 1954, the Supreme Court unanimously decided the Brown v. Board of Education decision declaring segregation in public schools unconstitutional. In response, white southerners launched what they called “massive resistance” against the enforcement of civil rights within the states.

Republican President Dwight Eisenhower backed the Civil Rights Act of 1957 to enlist the federal government in the protection of voting rights in the states. After South Carolina Senator Strom Thurmond (who had fathered a biracial daughter he kept secret) engaged in the longest filibuster in U.S. history to stop the bill, Congress passed it on a bipartisan basis.

The role of the federal government in protecting the right to vote has been a mainstay of our Constitution since 1870.

But today’s Republicans are standing on the same ground former Confederates did in the post–Civil War years, insisting that only states can decide how the people within those states live, and who gets to vote on those conditions.

Today, once again, Senate Republicans have filibustered a motion to begin debate on the John Lewis Voting Rights Advancement Act. That act would restore some of the provisions of the 1965 Voting Rights act the Supreme Court stripped away in their 2013 Shelby County v. Holder decision. In 2006, when the Voting Rights Act came up for renewal, it passed the Senate unanimously. Today, the only Republican voting to advance the John Lewis bill was Alaska's Lisa Murkowski.

Let's not forget Trump got a lot of religious right votes in 2016, because he promised to appoint religious right judges to the U.S. Supreme Court and lower federal courts.

Let's not forget the mob that attempted to keep Donald Trump in the White House on January 6 of this year, was a white mob, who were convinced blacks stole the election from Trump.

Let's not forget not one of those white mobsters, nor their white instigators, all the way up to Donald Trump, have been prosecuted for sedition, treason, etc.

Let's not forget most of the red spectrum believe even now blacks stole the White House from Trump in 2020.

Let's not forget the NRA is a right wing organization.

Let's not forget the NRA loves the red spectrum and vice versa.
Let's not pretend the right side of the spectrum will not use guns and grenades, bombs, rockets, etc., to defend their views.

I don't know if John Wick is right or left, red or blue, but he always wants more guns. I don't see the blue side of the spectrum thinking like Wick. I see the blue side thinking they can talk their way through these trying times.

I wonder if Democrats now wish they had run Joe Biden in 2016, instead of Hillary Clinton?