Spiritual Alchemy involves a lot of pain and helps humans stop being bots (programmed, brainwashed, etc.) and move toward being real people :-) 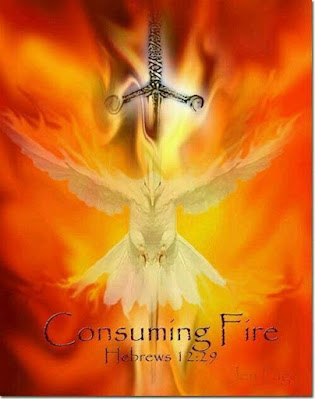 Responses at Reddit to yesterday's  Spiritual Alchemy is supposed to hurt, be difficult - consider Jesus in the Gospels and others who took that road less traveled

“I have come to bring fire on the earth, and how I wish it were already kindled! But I have a baptism to undergo, and how distressed I am until it is completed! Do you think I came to bring peace on earth? No, I tell you, but division. From now on there will be five in one family divided against each other, three against two and two against three. They will be divided, father against son and son against father, mother against daughter and daughter against mother, mother-in-law against daughter-in-law and daughter-in-law against mother-in-law.”

3 In those days John the Baptist came, preaching in the wilderness of Judea 2 and saying, “Repent, for the kingdom of heaven has come near.” 3 This is he who was spoken of through the prophet Isaiah:

“A voice of one calling in the wilderness,

‘Prepare the way for the Lord,

4 John’s clothes were made of camel’s hair, and he had a leather belt around his waist. His food was locusts and wild honey. 5 People went out to him from Jerusalem and all Judea and the whole region of the Jordan. 6 Confessing their sins, they were baptized by him in the Jordan River.

7 But when he saw many of the Pharisees and Sadducees coming to where he was baptizing, he said to them: “You brood of vipers! Who warned you to flee from the coming wrath? 8 Produce fruit in keeping with repentance. 9 And do not think you can say to yourselves, ‘We have Abraham as our father.’ I tell you that out of these stones God can raise up children for Abraham. 10 The ax is already at the root of the trees, and every tree that does not produce good fruit will be cut down and thrown into the fire.

11 “I baptize you with[b] water for repentance. But after me comes one who is more powerful than I, whose sandals I am not worthy to carry. He will baptize you with[c] the Holy Spirit and fire. 12 His winnowing fork is in his hand, and he will clear his threshing floor, gathering his wheat into the barn and burning up the chaff with unquenchable fire.”

Reader 1
That was john. He was known for baptizing people, he even had a little nickname about it.

The Luke passage is Jesus, mirroring what John the Baptist had said of him. I read somewhere some years ago that John the Baptist held people underwater until they nearly drowned and had a near-death experience, which was known in those days to cause a spiritual shift.

The Chickpea
A chickpea in a pot leaps from the flame,
out from the boiling water,
Crying, "Why do you set fire to me?
You chose me, bought me, brought me home for this?"
The cook hits it with her spoon into the pot.
"No! Boil nicely, don't jump away from the one who makes the fire.
I don't boil you out of hatred.
Through boiling you may grow flavorful, nourishing,
and united with vital human spirit.
I don't inflict this suffering out of spite.
Once green and fresh, you drank rain in the garden;
you drank for the sake of this fire.
God's mercy precedes His wrath;
by God's mercy the sick ones suffer.
It has always been so; this is how God creates all that exists.
Without pleasure, no creatures would come into being.
Without creatures,
what could the burning love of the Friend consume?
Such sorrow may come that you might wish
to be free of this life.
yet the Grace of God will overtake His wrath,
once you are washed clean in the river of suffering.
Chickpea, you fed in the springtime;
now pain has become your guest.
Entertain him well, that he may return home grateful,
and speak of your generosity to the King.
Instead of your vision of good fortune,
the One Who Bestows Favor may come to you;
then all true blessings may be drawn to you.
Just as Abraham commanded his son:
'Lay your head before my knife
I see in a dream that I must sacrifice you,'
lay your head before God's knife,
that He may cut your throat like that of Ishmael.
He may cut off your head,
but only the one that is immune to death.
Such submission is the fulfillment of God's purpose
— seek this submission.
Chickpea, continue to boil in suffering,
so that no self may remain in you.
Though once you laughed in the garden of earth,
you now are the rose of the garden of spirit,
you now are the eye of spirit.
Once you are torn from the garden of water and earth,
you may become food, and thereby enter the living world.
Become nourishment, strength and thought!
Once you were sap; now become a lion in the jungle!
You were born from God's attributes;
return eagerly to them.
You came from the cloud and the sun and sky,
then scattered and ascended to heaven.
You came as rain and heat;
you will return into the Divine attributes.
You were part of the sun and the cloud and the stars.
You became soul and action and speech and thoughts.
Our victory after the checkmate of death
gives truth to the words,
'Verily, in being slain there is life.'
Action, speech and sincerity become food for angels;
they climb this ladder to heaven.
A morsel of food becomes food for humanity,
rises from its inanimate state and obtains a soul.
The caravan of spirit travels constantly between earth and heaven.
Join it gladly and freely,
not bitterly and full of hatred, like a thief.
I speak bitter words to you so you may be washed clean of bitterness.
The frozen grape thaws in the cold water
and leaves its coldness and hardness behind.
When you endure bitterness,
your heart will fill with blood like the grape,
and you will be freed from all bitterness.
A dog not kept for hunting wears no collar;
the raw and unboiled are nothing but insipid."
The chickpea speaks, "If this is so, then help me to boil!
By this boiling you elevate me.
Hit me with the spoon; delight me!
Like the elephant, strike me and brand my head,
that I may not dream of the gardens of Hindustan.
Let me gladly submit to this boiling
that I may be embraced by the Beloved.
Men and women, imagining themselves free,
grow insolent and hostile, like the dreaming elephant.
When the elephant dreams of Hindustan,
he disobeys the driver and becomes vicious."
The cook says, "I was once like you, part of the earth.
I drank the fire of self-discipline, fasting and prayer,
and became worthy and acceptable to God.
I boiled long in the world of time, and long in the pot of this body.
From these boilings I grew capable of strengthening the senses;
I became animal spirit, and then became your teacher.
While inanimate, I said to myself,
'You are running about in agitation
so that you might be filled with knowledge
and the qualities of spirit.'
Now that I have become animal spirit,
let me boil again and pass beyond that state."
Pray unceasingly to God that you might not be misled by these words,
and that you might arrive at your journey's end.
For many have been misled by the Qur'an;
by clinging to the rope of words, many have fallen into the well.
The rope is faultless, O perverse ones —
it is you who lack desire to reach the top.
Rumi

Pain is a necessary precursor element for the transmutation of the soul :)

Based on my and other people I have known's personal experiences and all that I have read and heard elsewhere, not just physical but all kinds of pain are part and parcel of ongoing soul transmutation.

The ending of Rumi's chickpea poem, admonishing many for how they used the Koran - as I learned to call the Qur'an- applies the same to Judaism, Christendom and all spiritual traditions that rely on scriptures/handed down teachings. For example, the early Christian church came up with a salvation formula that had wide appeal compared to what Jesus in the Gospels experienced and taught.

for our God is a consuming fire.

Reddit-Book-Bot
Beep. Boop. I'm a robot. Here's a copy of
Koran
Was I a good bot? | info | More Books

Was not aware bots are capable of doing spiritual alchemy, which, as I have experienced it and seen others experience it, and have heard and read of others experiencing it, helps humans stop being bots (programmed, brainwashed, etc.) and move toward being real people :-)