Was President Biden moved by God to get America out of Afghanistan? 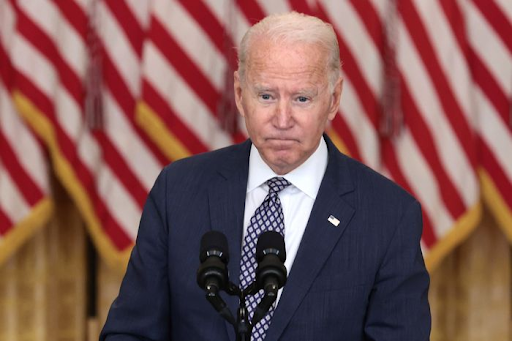 Yesterday's Afghanistan: just another defective Corporate America work product post at this blog featured a bunker-busting comment under the American historian Heather Cox Richardson's insightful letter about America's involvement in and withdrawal from the war in Afghanistan. I replied to the comment.
Here again is the comment, followed by other readers' and my responses:

Ally (Oregon)
The war in Afghanistan is 20 years old. It encompasses now 4 presidential administrations; 12 years of Republiqan, and 8 years and 8 months of Democratic administrations. President Biden took over the country on 20 January 2021 in the midst of a global pandemic and having NO assistance in the transition of administrations from the former guy, having seen an insurrection at the Capitol in an attempt to change the results of the election, and the current Republiquan party continuing its efforts to discount the free and fair election of 2020. He inherited a gutted State Department and a Department of Justice that has been tainted and corrupted. He inherited an Afghan withdrawal agreement brokered by a one term President that was engineered without the inclusion of the Afghan Government that the US had installed. He is looking down the barrel of a weapon that is having voting rights gutted in a majority of US states to insure that a Repuliqan minority can regain control over the two elected branches of government.
What I see is that Biden has been in office for 8 months, and has been fighting an uphill battle the entire time. To put the blame of the debacle of the withdrawal from Afghanistan entirely on Biden is to ignore the previous 19 years and three presidential administrations that created this mess. Personally, I put the most blame on President Obama, who has been the best Republican President we've had in this country since Dwight Eisenhower.
Further, I believe that there is a huge problem with the main stream media and how they are covering most everything these days. It is apparent that corporate interests rather than any semblance of actual reporting are the largest portion of any broadcast/news reporting seen.

Nancy
I agree with all that you've said, with the exception of blaming Obama most. He didn't invade, but did manage to kill bin Laden, after W clutching at Tora Bora early on. Obama might have been able to exit when he killed bin Laden, but keep in mind that he largely lost control in the midterms. His errors pale in comparison to every decision on Afghanistan made before or since.
Regardless of should have/could have, the current debacle can be laid squarely at the feet of TFG, Steven Miller, and the fascist enablers. Tragic that the feckless press could upend a moral, competent administration. Shame on them and on us for taking our eye off the ball.
Sloan Bashinsky
How does a Democrat President Obama waging two Republican president wars accept the Nobel Peace Prize?
Nancy
Clearly, we have differing opinions.
Sloan Bashinsky
You didn't answer my question.
Nancy
Nor must I.
Sloan Bashinsky
You answered by not answering.

Nancy
Astute of you. As I answered your first question, we have differing opinions. Why don't you just drop it. Bullying is generally frowned on here.

FERN (NYC)
Why was Obama selected and than awarded the Nobel Peace Prize?
Sloan Bashinsky
Don't know what was in the Nobel Committee's minds. I have wondered if it was because Obama was half black? During his campaign he promised hope and change? My question, though, was not why he was awarded the Nobel Peace Prize, but why he accepted it while waging the two Bush-Cheney wars? What was he thinking?
Sloan Bashinsky
There was more on my mind when I answered you last night. A dream before dawn left me feeling I should say more.
My dreams ongoing point me toward something to do, or do differently. Some dreams are pretty rough, some dreams take me hard to task about me. I am not a church person, but I have lots of experiences that remind me of stuff I read in the Bible happened to some people there.
Anyway ...
Unlike Donald Trump, who will hold up a Bible before the national Capitol to get applause from what I view as unaware Christians, Joe Biden is devout Roman Catholic.
It looks to me, whether he consciously or unconsciously knew it, Trump was somehow moved from Above to start the process of getting America out of Afghanistan militarily, but he did not finish it during his first term, because he figured it might cost him the 2020 election.
So, he lost in 2020 because he didn't get America out of Afghanistan militarily?
Enter Joe Biden in the White House, who was directed by his conscience and from Above to get America out of Afghanistan militarily, regardless of damage to his political career.
3 nights before 911, a by then familiar voice I associated with Archangel Michael asked me in my sleep, "Will you make a prayer for a Divine Intervention for all of humanity?" I awoke, wondered what that was about, made the prayer.

On 911, my concern was America would get into another Vietnam type war. It did not occur to me America would get into two such wars. A few days later, as I left the Key West post office, I heard, "America should get out of the Middle East altogether."
After Barack Obama was elected in 2008, I thought it was obvious that his God assignment was to get America out of the 2 Bush-Cheney wars. I was astounded he accepted the Nobel Peace Prize while continuing those two wars.
An interesting thing then happened, which I did not connect with Obama.
My bowel shut down. For several weeks, I got nothing from Above about why. Then, a violent poem burst out of me about what Obama had done by accepting the Nobel. I read that poem that night at a monthly meeting of the Key West Poetry Guild. There was another Guild function in a public park that week, and I read the poem there. My bowel unlocked.
Back when Bill Clinton was still Arkansas' governor, I wrote to him and we exchanged couple of letters. I told him, if he got elected, his God assignment was to make a national US apology to Vietnam. He did that during his second term. I wondered if that had something to do with him surviving the all out effort by the Republicans to impeach him?
FERN  (NYC)
Sloan, It was ridiculous that the Nobel Committee awarded Obama with the Noble Prize for Peace. That is a poor reflection on the Nobel Committee. I couldn't care less about Obama accepting it. He did get the country out of Afghanistan or a few other things that would have been beneficial to the country. Obama is a good writer and an imperfect person as we all are. I hope your bowel movements are normal now. It would be unfortunate if they were regulated by current events. Stay well. There is nothing more that I can say.

Sloan Bashinsky
My bowel reacts to many things that "disturb the Force", and as I work through whatever it is, my bowel responds. That Obama accepted the Nobel disturbed the Force hugely, to borrow a Donald Trump affectation :-). You meant Obama did NOT get America out of Afghanistan?

I got into a Facebook discussion the other day with a Key West fellow, whose Facebook page revealed he is way far right, idolizes Donald Trump, detests Biden's pull out from Afghanistan, but nothing about his religious views. I didn't know him when I lived in Key West. Don't know how we became Facebook friends.

He demonstrated in our discussion that he knows a great deal about the Bible, has studied it and others' perspectives of it intensely. For the life of me, I was not able to coax him to share even one direct experience he'd had with God, Jesus, the Holy Spirit, angels, etc. He disagreed with me 100 percent. He said I worship demons. I told him, if Jesus in the Gospels returned and behaved like he did 2000 years ago, he would get treated about the same and it would be by Christians.

sloanbashinsky@yahoo.com
Posted by Sloan at 8:24 AM