Rapid fall of Kabul was surprise? 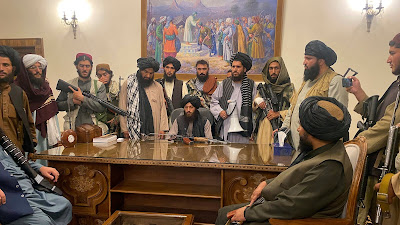 The rapid fall of Kabul was a surprise?

Was President Trump clever not to pull all the way out of Afghanistan during his first term?

Might that have cost him lots of votes in 2020?

Now look at who's being blamed.

By Democrats and Republicans.

Some Republicans want President Biden recalled because he gave up on Afghanistan.

Would they have asked for President Trump to be recalled if he had pulled America out of Afghanistan?

I wonder how many of those "patriots" were willing to go to Afghanistan and be armed and sent into combat?

Or for their children to do that?

I wonder how many of the white mob that stormed the U.S. Capitol on January 6 of this year were willing to be sent with their children to Afghanistan and be armed and sent into combat?

I wonder how many U.S. Congress members were willing to be sent with their children to Afghanistan and be armed and sent into combat?

I might feel somewhat sorry for President Biden if, as Congressman Biden, he had not voted in favor of America invading Afghanistan and Iraq.

I saw President Biden say on TV last night that the buck stops with him.

As President representing all of America, that's where the buck indeed stops.

The part of yesterday's God's angels need to knock some sense into lots more Americans than Trump Talibans post drew a comment to which I replied: