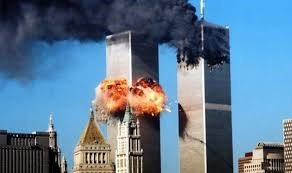 I turned in last night pondering President Trump had been nominated for the Nobel Peace Prize by a Norwegian Parliament member. When I went online this morning, I realized today is the 19th anniversary of 9/11, yet I saw nothing about it in my Apple or New York Times news feeds or in my Facebook time line. No discussion that 9/11 was as much, or more, an inside job, false flag it's called, than all Osama bin Laden's doing.

Shortly after 9/11, I was told by aliens (angels) that America should get out of the Middle East altogether and let Israel and Islam work it out or fight it out, and in that way learn if either of them are God's chosen people. I bet Trump moving the America embassy from Tell Aviv to Jerusalem pleased all of Islam, while America inexorably moved under Trump toward what could become civil war.

I see no indication that the prayer was answered, but then, one year to the night after I made the prayer, I was asked in my sleep by the same voice, "Would you make a prayer for a Divine Intervention for all of humanity?", and that time I made the prayer in my sleep and ended it with, "And let it begin in me." Oh my, did my life then get even more interesting, looking at even more beams in my own eye than I already had been forced to look at. Not in the least peaceful. What a different world this would be if everyone was given a course in mirrors.

Meanwhile, what do I know? Perhaps the coronavirus was meant to unify America against a common enemy, and instead, under Trump's leadership, the coronavirus divided America even more. Even as a Norwegian Parliament member nominated Trump for the Nobel Peace Prize. Well, Trump did say he preferred Norwegian to Shit Hole Country immigrants.

I opened the link, watched the YouTube, and replied to Sancho:

This is a serious nomination?

As serious as Obama's actually getting one and then setting the Middle East on fire by making Hillary his Secretary of State!  Trump will never win one of those for the same reason that Obama got one!

There also was newly-installed  President Obama continued the two Cheney-Bush  rich white men's wars for corporate profit in Afghanistan and Iraq, even as he accepted the Nobel Peace Prize, which caused me to wonder if the Nobel Committee had gone insane, or they just wanted to reward the first half-black American president for being born half black?
As you may recall, I published at my blog that my pooper pretty well shut down for nearly a month and only got back in working order after a violent poem about Obama accepting the Nobel erupted out of me and I read it at a Key West Poetry Guild monthly gathering.As you may also recall, after Obama won the Democratic nomination, I was told in my sleep that he had the potential to be the Anti-Christ. Perhaps he got there with many Democrats, but he did not capture many Republican hearts, which the Devil would set out to do in 2016, and again this November.
One nation, under?

I think you might like this white Mom talking about God and how listening to the "the self", instead of spirit(Christ), is the cause of so much strife!
CANDACE OWENS: THE BATTLE FOR CHRIST !!

Two very young women. Owens wore me out when she went on her rant. The white girl came close to wearing me out, but she is right about change comes through spirit fire, and I wonder how much of that she and Owens have experienced? The white girl also is right about Christianity today, and perhaps Jesus will return and straighten that out. I see they are trying to do right and preach doing things better. I imagine if they spent a while talking with me one on one, and actually wanted to hear what God has to tell them, they might hear stuff they were not expecting, or they might hear what wonderful people they are and keep at it. I'd really like to hear them discuss all the white faces at Trump's acceptance speech.

I like this girl!!!
The Two Biggest Fake News Stories of the Day, Debunked!

I watched the video and replied to Sancho:

As for what Trump actually said about Charlottesville, that he was not taking sides with Nazis and Neo-Nazis ... How many of the white folks defending the Confederate Flag and Confederate monument in Charlottesville do you figure were NOT Nazis, Neo-Nazis, Klan, Aryan Brotherhood, White Supremacists? 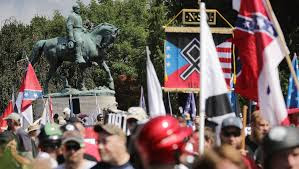 You're asking the wrong person, I could care less about statues and idols... physical and mental ones!

I bet a heap of people might not care for that question, including the young lady TV journalist so sure she had nailed it.

She is an instigator, just like you... but she gets paid for it!

Hmmm, if she is getting paid not to ask inconvenient questions, does that make her a prostitute?

sloanbashinsky@yahoo.com
Posted by Sloan at 1:36 PM