One Christian Nation, under Trump 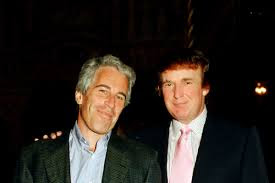 Jeffrey Epstein and Donald Trump
I met a lot of interesting people when I lived in Key West. Perhaps a dozen of the most interesting lived in vans and traveled around America and even Canada and Mexico, but wintered in Key West. After city officials and police made that illegal, the van gypsies kept showing up and I started affectionally calling them vicious van dweller criminals. City officials and police increased the pressure and most of my roaming friends gave up and wintered elsewhere. I hear from some of them from time to time on Facebook, and one remains a regular correspondent. He apparently reads voraciously and yesterday he graced me with:
https://news.yahoo.com/america-holy-roman-empire-21st-095502848.html
America is the Holy Roman Empire of the 21st century 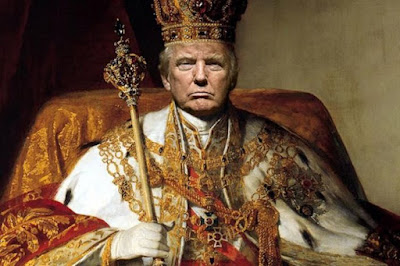 Germany is today a first-rank power: rich, strong, and efficiently governed. But just over 200 years ago, most of its current territory was a shambolic mess — part of the Holy Roman Empire, which even at the time was recognized as an anachronistic political fossil. More than a thousand years old at that point, the empire was a patchwork of hundreds of different duchies, electorates, principalities, kingdoms, church lands, and so forth, some of them just a few dozen acres (Liechtenstein is one of these relics which still survives), with an exceptionally complicated and illogical tangle of legal institutions overlaying them all. Surpassed by history, the confederation was ripe for the picking by an opportunistic tyrant.

The United States today bears an uncomfortable similarity to that doomed empire. The American Constitution is the oldest in the world still operating, and has been obviously out of date for well over a century. Half the basic mechanics of government are either malfunctioning kludges or a gross betrayal of its own founding principles. Countries that fail to maintain themselves to this degree often do not survive.

Let's start with the Electoral College, which has developed a clear bias towards Republicans — a 2-3 point Biden popular vote win would mean a tossup according to its rules, while he would need about a 5-point victory to be sure. As I have argued before in detail, this is the goofiest method of selecting a head of government found in any rich nation, and quite possibly in the entire world. Not only has it delivered the presidency to the popular vote loser twice in less than two decades, it is mechanically possible to win while losing the popular vote 4-1. Moreover, its winner-take-all structure means that presidential candidates pay rapt attention to only a handful of states with a close partisan balance. The vast majority of states, both large and small, are virtually ignored by campaigns because their electoral votes can be taken for granted, and, once in office, a president has no obligation to serve the states that didn't vote for him...
Me
If Trump loses, I think he will ask the U.S. Supreme Court to decide it. He loves to litigate what doesn't go his way.
Victor
Unless it’s a landslide ......according to the article they’ve been fenagling. Stuff for years in Preparation......He’d ask the Janitors in the White House if he thought it would delay the outcome 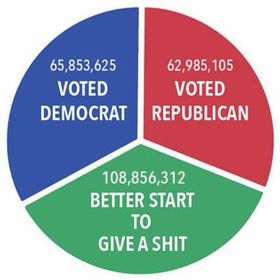 Victor
How Charismatic Catholic groups like Amy Coney Barrett's People of Praise inspired 'The Handmaid's Tale'
Me
peachy
Victor
Hahaha ......now you must watch “The Handmaids Tale”........Good luck I watched part of one episode .....my daughter had it on ......That was enough 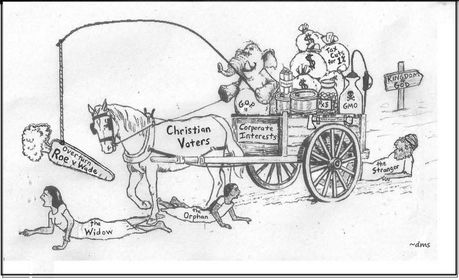 Me:
No thanks, Puritan II, III, IV, V, VI doesn't interest me.
Victor then graced me with a sew of anti-Trump links, which caused me to finally squeak:
You're wearing me out, Victor
Victor
You don’t have to read it . Delete it .....Pray the mother ship comes and takes us outta here
I never envision America would come to this ....I love his country back in the eighties ..... And I still do the people I’ve met in the past ten years ....wonderful people .....what the fuck has happened

Victor
The Democrats have answers to what? Trump's broken every rule in the book. Lies, False accusations Stealing taxpayers money. I know all this. Are Americans really that stupid? What hold has he got on the Senate? That’s what I want to know.
I’m glad I live in a van I have little to lose. I have 3 Children and 6 Grandchildren who have to survive this shit show.

Me
You asked what the fuck happened? How'd you like how it went in Key West? I have same concerns for my children and their families. I'm trying to stay in the angels' good graces and deal with the rest of what they and life serve up. I think maybe I'm the last of my kind, that is the dinosaurs.

Victor
Key West was a Micro chasm as all end of the road places are .....I’ve been to many of them... a fishing Village that went yuppie... It was fun while it lasted... I knew when Michael Angelo passed on it was over for van dwellers... I’ve never been back since
I’ve been in 49 states most 2-3 or 4 times 9 of 10 provinces of Canada and two of three territories and Mexico I’ve loved every minute of it met the best people no regrets
The last four years have been nothing but a shit show How anybody with half a brain can even listen, Defend or think about voting for this piece of lying shit flim flam two bit gangster beggars belief.

Victor
Steinbeck:
Not that I have lost any hope. All the goodness and the heroisms will rise up again, then be cut down again and rise up. It isn’t that the evil thing wins — it never will — but that it doesn’t die. I don’t know why we should expect it to. It seems fairly obvious that two sides of a mirror are required before one has a mirror, that two forces are necessary in man before he is man. I asked [the influential microbiologist] Paul de Kruif once if he would like to cure all disease and he said yes. Then I suggested that the man he loved and wanted to cure was a product of all his filth and disease and meanness, his hunger and cruelty. Cure those and you would have not man but an entirely new species you wouldn’t recognize and probably wouldn’t like.

When is good going to Win one against this evil being ?

Me
One such man is the U.S. president.

Victor
exactly
Steinbeck:
Certainly man thrives best (or has at least) in a state of semi-anarchy. Then he has been strong, inventive, reliant, moving. But cage him with rules, feed him and make him healthy and I think he will die as surely as a caged wolf dies. I should not be surprised to see a cared for, thought for, planned for nation disintegrate, while a ragged, hungry, lustful nation survived. Surely no great all-encompassing plan has ever succeeded.

I’ll leave you with that Sloan .."..you have enough torment in your life....good night
Me
cheerio
Victor this morning
How to Win a Debate With a Bully
Me
The November election results will show how many Americans want him to be president and how many don't, and if Trump loses and does his normal routine of filing a law suit in federal court to contest the results, that will reveal even more about the people who voted for him. Birds of a feather flock together.
sloanbashinsky@yahoo.com
Posted by Sloan at 10:07 AM