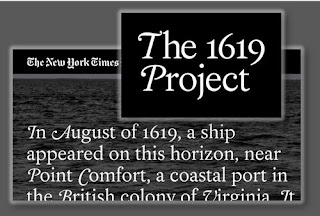 When I was born, the law in Alabama was you had to be 6 by September 30 to enter first grade, and so after I was born my mother had her doctor write up a fake birth certificate saying I was born on September 7, and she also had the real birth certificate. I learned of the ruse when I was maybe 11 and saw, "Bash, 10-7-42" on the charm bracelet of my mother's mother. Trapped by my question, my grandmother told me what had happened so I could enter 1st grade with my friends, and I could tell no one. I didn't even tell my mother, and when she told me during the eight grade, when there was nothing the school system could do about it, that September 7 was not my birthday, I said I already knew that, and how I had learned it.

When I woke up this Labor Day morning and checked out Epoch Times in my email account, this leaped out at me:
Trump Says Schools Teaching NY Times' 1619 Project 'Will Not Be Funded'

I had never heard of the 1619 Project, which is dead solid proof I am not a liberal or a conservative, but am an ignoramus. So, I started reading online about slavery's origins in America, and learned 1619 was the first reported landing of African slaves in what now is the United States: in Jamestown, Virginia. I read that classical historians insist slavery had nothing to do with the American colonies rebelling against England, and 1619 Project proponents say slavery was part of the reason for the rebellion.

I already knew England did not abolish the slave trade until later.

I read today that that both sides of the Revolutionary war offered black slaves freedom if they fought against the other side.

I already knew the U.S. Constitution and the Thirteen Colonies came to being a nation after an agreement was reached so that 5 black slaves would be counted as 3 people for determining how many people each state could elect to the U.S. House of Representatives. And, I already knew that, despite Jefferson writing in the Declaration of Independence that all men are created equal, Jefferson obviously did not believe that applied to black men, and there was no mention of women even existing, much less having the right to vote.

I also read today that Abraham Lincoln was viewed by some people as being in favor of slavery, and that the originators of 1619 project overstated their case.

I saw during President Trump's for-God-and-country acceptance speech at the Republican National Convention, that the audience was 99- percent white. I think anyone who does not think the Republican Party is kissing kin of same white party that founded America and then became the Democratic Party after the Civil War President Lincoln waged to preserve the Union (and free the slaves) needs either a brain transplant or truth serum.

There seems to be no dispute that black lives mattered a great deal during the American Revolution, because without black slaves' help, the rebelling colonies could not have waged that war and the colonies would have been in deep economic doo doo. Without the 5 for 3 compromise, the Thirteen Colonies would not have merged into a single nation. And, how do you figure the War of 1812 would have gone without the southern states helping the northern states beat the British again, after the British sacked Washington D.C.and burned the White House?

All my mother did was make a fake birth certificate so that I could enter 1st grade with my friends.