Should President Biden have retained an "'American Zone" in Afghanistan? 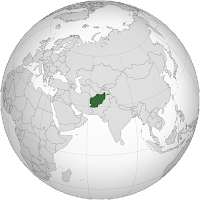 Key West amigo responded to Afghanistan's message to America: Karma is real and really does increase when ignored

Sloan, I must again take issue with your and the majority on the left's assertion that however we pulled out, "it would be disastrous."  As previously pointed out, Russians left the same benighted country in our lifetimes without it being "disastrous."  For that matter, the whole Soviet Union in effect lost their war with capitalism in ~1990 with no more carnage than the breaking up of the Berlin Wall.  No one claiming inevitable "disaster," including you, disputes these easy observations.  Add to that, Germany losing two WW's and Japan one without any "disastrous" pulldowns.
And it is easy to find, even on MSNBC, military observers listing all of the obvious ways we could have averted these specific idiocies.  Not closing Bagram; re-doing the absurd special visa application process--this process was blown up in Trump-ers measures to reduce all immigration; defining an event-certain, (everyone safely evacuated!) instead of a date-certain withdrawal objective; using our thousands of helicopters to rescue our interpreters far from Kabul; simply evacuating our war equipment (one observer says the Taliban have more military helicopters we have abandoned than Australia owns); having someone, anyone, responsible for evacuating and settling the worthy refugees--watching the volunteers who successfully saved so many shows that any of our multitudinous taxpayer-paid hordes in Homeland Security, State Department, could and should have been doing themselves.
My most Sloan-like, out-of-the-box solution for all such incursions is to create an "American Zone" like Guantanamo except not a prison. That is, carve out a nice piece of real estate manned by Marines for defense and Peace Corps types for admin, and let our supporters in these countries get to stay where they were born and want to live, but in which they can develop our sort of governments.  NOTHING like this will ever be in the America created by Bin Laden when he killed 3k to prod us into killing 3m.
Rick

My staggered responses, as I pondered what Rick had written:

What nobody seemed to factor in was the Americanized Afghan military would roll over to the Taliban. That still seems to be getting ignored by the armchair experts. As does the last paragraph of my post below, about how America got crosswise with its Saudi ally Osama bin Laden. Germany surrendered. Japan surrendered. The mujahideen/Taliban never surrendered. America learned nothing from the Vietnam war. No reduction in arrogance, stupidity. Maybe Afghanistan debacle woke up some Americans. Some ain’t enough, though.

Let Americans not forget the Saudi Osama bin Laden was an American ally fighting with the Afghan resistance against the Soviets. Osama was an American ally until his home country, Saudi Arabia, allowed American and other Coalition infidel forces station in Saudi Arabia, Muslim Holy Land, prelude to driving Saddam Hussein's Iraq army out of Kuwait. Saddam had polled the American lady ambassador re how America might feel about Iraq taking part of Kuwait, which Iraq felt was part of Iraq? The lady ambassador said America would not object. Imagine Saddam's later surprise to be betrayed by his friend, the American president, we today call Daddy Bush. Saddam and Iraq were American allies. A buffer against Iran. Daddy Bush ignored Ross Perot's plea not to go into Kuwait. Perot said Iraq would sell that oil to America. That's what started this entire mess.

I have been reading online and seeing on CNN great wailing and gnashing of teeth over U.S. military hardware left behind in Afghanistan. Here's a comprehensive Forbes article on U.S. hardware in Afghanistan going back to 2001. A staggering amount of hardware and $$$. As I read the article, which takes swipes at Biden not being forthcoming, the hardware left behind was in the hands of the Afghan military, which folded.

Here's a link to a USA Today article about what American forces left behind, much of it destroyed and made inoperable.

Sloan, thanks for the info (now redacted!) about military equipment left behind.  Neither article offers any U.S. explanations why this expensive material was not given to someone, anyone on our side, who could use it.  I can only believe it was because military contractors don't want to cut into future sales by giving away the product.
I also thank you for engaging in civil disagreement, an almost non-existent commodity on news these days.  No one on O'Donnell bringing up my arguments disputing "inevitable disaster."  You do.
In brief (for now-more tomorrow, in case you want to save this for one continuous post) I'll say everyone now pretty much agrees that seeing the Afghan military collapse was the most predictable "disaster" ever.  You could actually SEE it in months leading up to final departure.
As for Russians leaving, they did indeed leave a similar Russian-sympathetic govt, which lasted for two years.
As for attacks on Guantanamo, we have decades showing the real Guantanamo has never been attacked.  As I said, we leave a Marine detachment.  Anyone attacks our safe zone,  invites a direct reprisal.  We do not even have to worry about killing our friends, because they will have retreated to our safe zone.  From our friend, Wikipedia:

Soviet support for the Najibullah government did not end with the withdrawal of the regular troops. Aid totalling several billion dollars was sent by the Soviet Union to Afghanistan, including military aircraft (MiG-27s) and Scud missiles.[6]:123 Due primarily to this aid, the Najibullah government held onto power for much longer than the CIA and State Department expected.

By the way, one of the unremarked humorous items is the use of "retrograde" for "retreat."  To me, that only waves the white flag of humiliation that would not be waving without the self-inflicted self-shaming.

I read an article explaining the Russian exit. You’re right, extremely well thought out and carried through.

Perhaps the US plan was to turn over military stuff to Afghan military, and when that went south, alternative was to disable it, so Taliban could not use it.

I still see no reason US should have left a Guantanamo in remote Afghanistan.

Excellent point on intent to distribute to Af military.  Sad that you are the first to figure this out, instead of the 6-figure talking heads on TV and in print.
Thank you for challenging me on my out-of-the-box American Zone proposal, eg Guantanamo 2.0.  I will send you a more specific proposal tomorrow.
Glad to have your brain in the game, Sloan.

What I read, the Soviets armed the Afghan military at that time, and they carried forward okay. So, what happened between then and now?  A lot more radical Islam certainly happened, fueled in very large part by America meddling in many areas of the Middle East. But, oh my, did Daddy Bush and Saudi Arabia piss off Osama bin Laden.
Look forward to you trying to convince me why America should have a Guantanamo in this remote west Asia Muslim country.