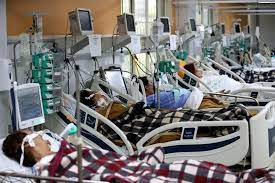 Here's the lead into a recent letter from American Historian Heather Cox Richardson. You can see the full letter by clicking:

After weeks of pleading with Americans to get vaccinated as Republican governors opposed mask mandates, ICUs filled up, and people died, today President Joe Biden went on the offensive. Saying, “My job as President is to protect all Americans,” he announced that he was imposing new vaccination or testing requirements on the unvaccinated. The U.S. government will require all federal employees, as well as any federal contractors, to be vaccinated. The government already requires that all nursing home workers who treat patients on Medicare and Medicaid have to be vaccinated; Biden is expanding that to cover hospital workers, home healthcare aides, and those who work in other medical facilities. “If you’re seeking care at a health facility, you should be able to know that the people treating you are vaccinated.”

Sloan Bashinsky
Bravo, Heather!!!
Based on I have read online and seen on TV and Facebook for quite a while, in the main, the rabid anti-vaccination red spectrum white folks support the Jan 6 Taliban and their leader, Donald Trump; they want free access to guns that kill as many people as possible; they are certain God and Jesus are on their side; they don't want women to have rights to choose what happens in their bodies; and they don't want blue spectrum whites, blacks, browns, and yellows to vote. As they rail over Joe Biden pulling out of Afghanistan, following Donald Trump's deal with the Afghan Taliban. Even as the RNC Taliban announced they will sue tp block President Biden's new vaccine mandates.
I think President Biden didn't go far enough. I think he should have declared Covid-19 medical martial law and ordered American hospitals that accept any financial help whatsoever from the U.S;. Government to stop receiving unvaccinated adults infected with Covid-19. Let such infected Americans be saved by God and Jesus, or by whatever they believe or don't believe in, but not by the very medical system they told to take a hike. Let those anti-vaxxers fight Covid-19 on their terms and find out in that way just how devoted they are to their principles. Perhaps they will develop herd immunity, and perhaps there will be fewer of them to rail about their rights threatened, leaving them to vote from their graves.

Pam (West MA)
"Those Republican lawmakers furious at the new vaccine requirements are possibly less worried that they won’t work than that they will." And, I love it that Biden said he wants to "just get them out of the way." DeathSantis is trying to fool his citizens by no longer publishing daily numbers. Another nail in his political coffin as people can't be fooled. As someone on Nicole Wallace said yesterday...."DeSantis is not known for his deep self-awareness." HA!

Annette (Land O Lakes, FL)
Last night I attended a Zoom meeting hosted by Indivisible of Florida. The guest speaker was Rebekah Jones, the data scientist that was fired after creating the COVID dashboard, and who had police come to her house and point guns up the stairs at her kids. She has been granted whistleblower status and, boy, did she have a lot to say about DeathSantis. This man is a despicable excuse for a human being and wants nothing more than to cover up what is happening in Florida. And already he is mouthing off at President Biden’s plan as being “coercion “.

Jack(FL-NY-NJ)Writes JacksPotpourri
If Floriduh Governor DeSantis were an opponent of masking mandates or required vaccinations because of the hollow illogical reasons the gullible accept as justification for their positions, his actions would be more understandable. But his educational background (Yale undergrad degree, Harvard Law) suggests he is capable of knowing better. That he takes these positions anyway leaves no alternative other than to describe him as an inherently bad person, politically motivated, with no consideration whatsoever for others. If it fits into one’s religious beliefs, he might even be considered a disciple of the Devil, who is currently wielding his Covid19 weapon against humanity, with the help of those like DeSantis.

Sloan Bashinsky
Perhaps God, Jesus and/or Lady Karma will treat Governor DuhSantis to delta Covid-19 at its finest. The ambulance taking him to the nearest ER has 4 flat tires at the same time, when the back up ambulance finally arrives and gets him to the ER, it is so full that a line is waiting around the block and all beds in that hospital are full and sick patients are lying side by side in ward hallways. So, a helicopter is called to take Governor Duh to another hospital, which is in the same shape as the first hospital. As are all other Tallahassee hospitals, and every hospital in the Florida Panhandle and elsewhere in Florida. So, the helicopter takes Governor Duh to Mar-a-Lago, where heavily-armed U.S. Secret Service forces and highly-paid mercenaries prevent Governor Duh from leaving the helicopter. The helicopter then flies to Havana and is shot down by Russian Migs as it enters Cuban airspace.