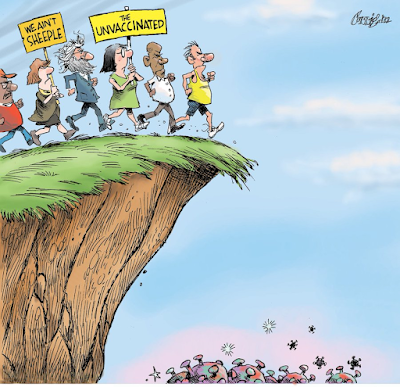 JackIf Floriduh Governor DeSantis were an opponent of masking mandates or required vaccinations because of the hollow illogical reasons the gullible accept as justification for their positions, his actions would be more understandable. But his educational background (Yale undergrad degree, Harvard Law) suggests he is capable of knowing better. That he takes these positions anyway leaves no alternative other than to describe him as an inherently bad person, politically motivated, with no consideration whatsoever for others. If it fits into one’s religious beliefs, he might even be considered a disciple of the Devil, who is currently wielding his Covid19 weapon against humanity, with the help of those like DeSantis.

Sloan Bashinsky
Perhaps God, Jesus and/or Lady Karma will treat Florida Governor DuhSantis to delta Covid-19 at its finest. The ambulance taking him to the nearest ER has 4 flat tires at the same time, when the back up ambulance finally arrives and gets him to the ER, it is so full that a line is waiting around the block and all beds in that hospital are full and sick patients are lying side by side in ward hallways. So, a helicopter is called to take Governor Duh to another hospital, which is in the same shape as the first hospital. As are all other Tallahassee hospitals, and every hospital in the Florida Panhandle and elsewhere in Florida. So, the helicopter takes Governor Duh to Mar-a-Lago, where heavily-armed U.S. Secret Service forces and highly-paid mercenaries prevent Governor Duh from leaving the helicopter. The helicopter then flies to Havana and is shot down by Russian Migs as it enters Cuban airspace.

Sloan Bashinsky
Dang
But then, with God all things are possible, just ask any Bible believer.

Nancy
True, and so are Kemp and Abbott, but what about breakthroughs? I think they are more virulent for hypocrites.

Sloan Bashinsky
That's where God, Jesus and Lady Karma might have their say.
A Republican friend has a daughter, who is a physician in a southern red state hospital. He told me this morning that his daughter and other doctors in the hospital are having serious moral struggles treating unvaccinated Covid-19 patients. The ones with with already existing serious medical are the ones who usually die.
My friend said it looks to him like Darwin's selection of the species.
I agreed, and said it also looks like tempting God and fate, and suicide. Why should I care about them if they are culling themselves? Why should they be allowed into hospitals where they take beds away from and put at risk patients who do not have Covid-19?
I bet if hospitals stop accepting adult unvaccinated Covid-19 patients, that would turn the anxi-vaxxer nation upside down and inside out and every which a way but loose.
Imagine Governor DuhSantis catching the mu variant and not being allowed into a hospital.

Nancy
You're hired! Any room on the 'copter for other passengers?