Do abortion haters know when the soul attaches to an unborn or care what happens to an unwanted unborn after it is born? 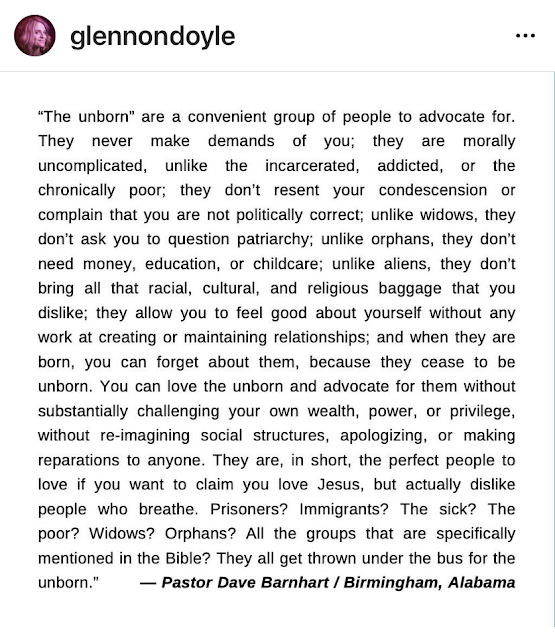 I have grown rather fond of dropping this on hard-core anti-abortion Christians:

Genesis 2:7: "And the LORD God formed man of the dust of the ground, and breathed into his nostrils the breath of life; and man became a living being."

Jennifer
For what it's worth, I think most Christians would counter your initial argument with Jeremiah 1:5, rather than Genesis 2:7. Jeremiah 1:5 is the scripture most frequently cited in anti-abortion arguments - "Before I formed thee in the belly, I knew thee..." Now, of course, the rest of the scripture refers to Jeremiah's pre-ordained calling to be a prophet, but as so often happens, scripture is taken out of context to prove a point. In this case, Christians, at least evangelical Christians use Jeremiah 1:5 to prove that life begins at conception (or even before!). Although I am personally a pro-life Christian (and I mean pro-life, as opposed to the narrow anti-abortion mind-set) I am heartily opposed to the new Texas law and to any attempts to overturn RvW.
Sloan Bashinsky
Jeremiah 1:5 is about God knowing the soul before it became a human being. Christians tend to read the Bible to suit their perspectives. But since you raised that from Jerimiah, I will ask when does the soul attach to a fetus? Just because it has a heartbeat, does it have a soul? Isn't having a soul what separates human beings from animals? does a soul attach to an embryo? Or, does a soul attach when the embryo is born and takes the first breath of life? I dare anyone to dare to say they know then a soul attaches.

Well, I wasn't expecting a theological debate, nor was I attempting to initiate one. But since you raise the question of souls, from a purely anatomical perspective who can prove that there is even such a thing as a soul, let alone say they know at what point a soul enters a body.

Sloan Bashinsky
If you lived in my skin a little while, you'd know for a fact that souls exist, and angels, and demons, and God, and the Devil. I have seen ETs, they exist. But that's a bit afield from the Texas anti-abortion statute, which is the handiwork of Christian fanatics, so I meet them on their home turf (they think) and give them their own scriptures and doctrines beliefs in ways that are not convenient to them.

Jennifer
Sloan, I do believe in God, and angels, the devil, and demons from having lived in my own skin, but you're correct - this is all far afield from the statute in question, which violates civil rights and demonstrates the unwillingness of the SCOTUS to uphold the minimal gains that have been achieved in the fight for civil rights.
Well, I wasn't expecting a theological debate, nor was I attempting to initiate one. But since you raise the question of souls, from a purely anatomical perspective who can prove that there is even such a thing as a soul, let alone say they know at what point a soul enters a body.
Sloan Bashinsky
My a bit cheeky comment, which stirred far more discussion than anything I had published anywhere online, was my best shot at how to go about dealing with the Texas statute on the frontline in Texas. I am willing to bet the ranch that I'm the only lawyer (albeit no longer practicing) in America who even dreamed of taking the approach in court, which I suggested.
This really is about religion, plain and simple. The other side are fanatics, in my opinion. So, I meet them on what they consider their turf, and I put inconvenient facts and questions to them, which are based on their own scriptures and beliefs. Imagine me being allowed to do that on Oprah, NPR, Anderson Cooper, Tucker Carlsen. Bashing them with Genesis 2:7. Asking them when a soul attaches? And when they dare to quote science, I remind them they rejected science during the Covid pandemic; and they rejected evolution theory; the Bible is their science.
There is yet another court, in which everyone stands trial. That court is not of this world. I stand on trial in that court every day of my life. The judges there are not human beings. Their rulings and sentences play out in their own way and time. Karma is very real; sometimes it is quick, sometimes it takes a while.
I heard last night that blue states are considering passing similar bounty hunter laws aimed at people who own illegal guns, and that is freaking out conservative Republicans. Perhaps that threat might influence the very religious justices on the Supreme Court, if it ends up having to deal with the Texas anti-abortion statute?
Meanwhile, mental, emotional and spiritual mayhem perhaps well describes the Texas statute's impact in Texas. Perhaps the ACLU, the National Women's Law Center, Southern Poverty Law Center, etc., will file lawsuits in Texas, challenging the statute. Or, what about armed insurrection? Well, perhaps not in Texas, where red spectrum folks probably have many more guns than blue spectrum folks.

Jennifer
"I am willing to bet the ranch that I'm the only lawyer (albeit no longer practicing) in America who even dreamed of taking the approach in court, which I suggested." Objection, your Honor...calls for speculation. As well as being presumptuous

Sloan Bashinsky
Heh, where'd you go to law school? Even so, I still make the bet and hope like all get out I lose it! :-)
Meanwhile, and sadly, I think, other reader comments here and what I see online and on TV, indicate abortion providers in Texas have pretty much shut down without a shot being fired, which I imagine is what the makers of the Texas statute hoped would happen.
So, it falls on Texas abortion providers and pregnant women who want abortions to mount a civil insurrection and force the issue in the Texas courts. If enough of that happens, if the Texas courts are gridlocked, that might create an insurrection in the Texas judiciary.
Perhaps a Texas judge would rule the statute unconstitutional, which ruling could be cited by all defendants in all cases, creating an exquisite John Grisham legal nightmare in Texas, which I bet the ranch Thelma and Louise would love dearly.
While Texas state legislator Beto O'Rourke introduces a bill that pays private citizens to rat out owners of illegal guns.

Jennifer
I didn't go to law school :-) But if your scenario plays out the way you have suggested, how sad that the only reason a Texas judge would rule the statute unconstitutional would be due to a gridlock of cases. Still, I guess we would be happy with that "win" if we could get it. Seems to me that the GOP's strategy now is to spread us thin by engaging us on so many different fronts

Sloan Bashinsky
Perhaps you should go to law school?
A win's a win. Perhaps the hypothetical Texas judge felt the statute was unconstitutional and was willing to take the heat his/her ruling surely would bring.
If Texas abortion providers and women who don't want abortions do not mount a civil insurrection and endure the heat, then the makers of the statute won without a shot being fired.
Unless, a Texas abortion provider and a pregnant woman wanting an abortion bring an action in federal court and set the stage for appeal in the federal court system, which hopefully ends up before the U.S. Supreme Court, which could be a bad crapshoot for pro-choice?
In the meanwhile, there are no abortions in Texas, because abortion providers and pregnant women wanting abortions let the makers of the statute win without a shot being fired?

Jennifer
Thanks, but I don't think law school is in the cards for me. But I would like to pursue a doctorate in education, before I'm too old to put it to use..
Sloan Bashinsky

I hear that. I'm too old now to do much more than shoot off my mouth.

Jennifer
Oh my! Have we reached the age where we shoot off our mouths and the people around us just say "Bless his/her heart"? :)
Sloan Bashinsky
I don't hear "Bless his heart" much.
Jennifer
I don't either....yet

The cheeky comment that set all of that in motion: