the devil in the White House 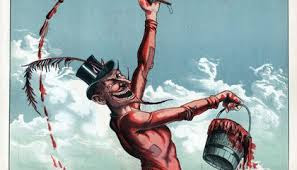 Besides being the greatest fool, trump is rather close to being pure evil !!!!!!!!!!!! Claiming to be the chosen one makes him the devil incarnate on Earth !!!!!!!

And all those pseudo Christians and others who are his followers are the devil's advocates.

Today's greatest fool post was part parody, part dead serious. Trump seems to lack any self-awareness. He seems to think he is God's gift for any and every thing. The scary is, Trump has an eerie spell/hypnotic effect on a large mass of Americans, and appeals to another large mass of Americans who see him for what he is and use him to promote their own agendas. I have friends in both camps, one of which is a cult, the other is simply opportunism.

It looks to me Trump is run, awares or not, by a demonic entity that, through Trump, gains deeper entry into both camps and interesting karma results. Ironically, Trump's evangelical and other Christian backers are well-versed in their churches about the devil and false prophets. Reminds of a minister friend who was convinced the devil would get anyone who did not attend church regularly. After hearing that several times from him, I asked where the devil would hide that nobody would think to look? The minister said he didn't know where that was.

In similar vein, a mainland friend read yesterday's greatest fool post and sent this cartoon, which he called, "The Real Roswell". 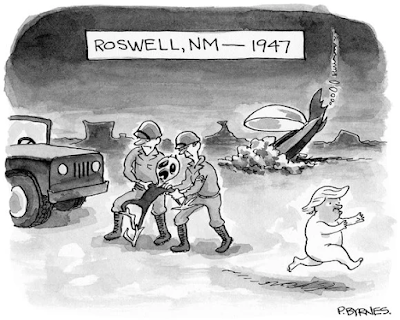 And I found this 2017 release online:

sloanbashinsky@yahoo.com
Posted by Sloan at 7:20 AM