The world's greatest fool lives in the White House? 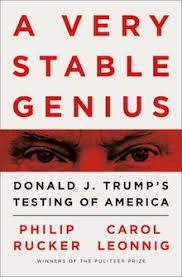 I went into a deep swoon at the dawn's early light after reading the "Trump Considering Changing Law That Makes Foreign Bribes Illegal" Huffington Post article reproduced later in this post. The deep swoon crashed down like the end of the world, when I realized in my bones that I am a mere amateur fool, a wannabe, a fledgling, with very small hands. I was overcome with an overwhelming impulse to commit foolicide by swearing on stacks of bibles, it being Sunday and all, never, ever again to call myself, or pretend, imagine, hope or wish, that I am a fool. I then went paranoid wondering why the world's greatest fool had not already sicced a battery of Washington, D.C. copyright, trademark and patent lawyers on me? 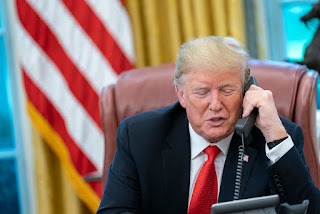 OMG!, what a very unstable idiot thing to assume, insinuate, wish, or even hope the world's greatest fool knows, or ever will know, I even exist. For all I know, I'm a fake person, who dreamed himself to exist. Even so, I went to amazon.com to buy a copy of soon to be released A Very Stable Genius mentioned in the beginning of the Huffington Post article down below, and was sticker-shocked over the $50 hardcover price tag, no trade paperback offered yet, and I don't have a device to read the $16 kindle version.

I also saw at amazon.com that this ain't the first book by that title, and I wondered if authors Rucker and Leonnig soon will hear from a battery of Washington D.C. copyright, trademark and patent lawyers? 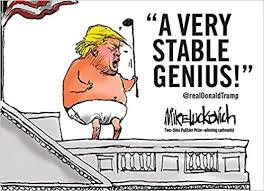 
In the newest chapter on President Donald Trump and the rule of law, administration officials are considering changing the statute making it illegal for American corporations to bribe foreign officials.
Asked Friday about the possibility of changes to the Foreign Corrupt Practices Act, White House Economic Adviser Larry Kudlow said it was under consideration, Bloomberg reported.
“I would just say: We are aware of it, we are looking at it, and we’ve heard complaints from some of our companies,” Kudlow told a reporter. “I don’t want to say anything definitive policy-wise, but we are looking at it.”
Trump’s reported push to make it legal to bribe foreign officials was raised in the new book “A Very Stable Genius,” written by Pulitzer Prize-winning Washington Post reporters Philip Rucker and Carol D. Leonnig. The authors said that Trump clashed with former Secretary of State Rex Tillerson as he pressed to scrap FCPA.
“It’s just so unfair that American companies aren’t allowed to pay bribes to get business overseas,” Trump is quoted in the book as saying, according to a passage published by The Washington Post. “We’re going to change that.”
Trump hasn’t responded to that passage, but on Saturday he lashed the “demeaning” book by authors he called “two-third Washington Post reporters.” He called it “Another Fake Book,” that has “already proved to be inaccurately reported.” He offered no details of that apparently false claim, however.

Another Fake Book by two third rate Washington Post reporters, has already proven to be inaccurately reported, to their great embarrassment, all for the purpose of demeaning and belittling a President who is getting great things done for our Country, at a record clip. Thank you!

31.4K people are talking about this
The book is a scathing portrayal of Trump as an ill-informed, reckless, explosive bully. The passage published by the Post involves an attempt by military leaders and Tillerson to provide an extended briefing for the president early in his administration to educate him about such issues as American history, alliances and even the location of nations. Trump, who repeatedly barked during the briefing that other countries have to start paying up for American defense help, suddenly blasted the officials as a “bunch of dopes and babies,” the authors reported. It was after that meeting that Tillerson called the president a “fucking moron,” according to the book, which was reported at the time.

So I’m reading a certain book. And ... oh my. I’ve never read anything like it. I’m almost at a loss for words. Almost.

2,159 people are talking about this 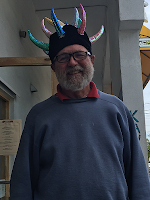 I saw online yesterday that President Trump was quoted as saying he is being prosecuted for making a perfect phone call. If that is true, in his own words, President Trump admitted making the phone call to the Ukraine President, asking him to have former Vice-President Joe Bidden and his son investigated by Ukraine law enforcement.
The Huffington Post article shows Trump and his staff looked at trying to abolish the federal bribery law the U.S. House of Representatives, by majority vote, found he  violated.
It looks to me, not as a an amateur fool, but as a former practicing attorney, that President Trump proved out of his own mouth and actions that he bribed the Ukraine President, and then President Trump obstructed and continues to obstruct investigation into the bribe.

But are those impeachable offenses? And if so, will the Republican-controlled U.S. Senate vote to convict President Trump and remove him from office? If I thought that, then I would not even be an amateur fool, I'd be an idiot.

Do I think the Democrat-controlled U.S. House of Representatives impeachment of President Trump was foolish? Perhaps politically in various ways, but if the Democrats had not done it, then Americans, and the whole wide world, would have been cheated out of watching a truly amazing stranger than fiction reality show.

sloanbashinsky@yahoo.com
Posted by Sloan at 10:53 AM