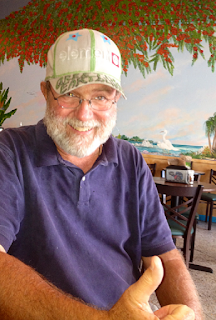 My amiga featured in yesterday's American politics cure: the truth, the whole truth, and nothing but the truth post at this blog texted me:
We need a whole new set of politicians.

I texted back:
When I lived in Key West and the Florida Keys, it seemed I proved people didn't want a new kind of politician. Perhaps had I carried on like Donald Trump, I would have gotten more votes, perhaps even elected?

That got me to ruminating my 10 runs for public office in Key West and the Florida Keys: 6 Key West mayor races; 3 Florida Keys county commission races; 1 county school board race. I recalled a Alabama amiga telling me the other day that I am all over YouTube. So I googled "Sloan Bashinsky YouTube" and found two Key West mayor race interviews that summed pretty well my approach to politicking in paradise.

▶ 3:04
Sep 1, 2009 - Uploaded by SouthernmostRadio
Key West Characters are running for mayor, and Sloan's the first to admit he qualifies. Formerly homeless and ...

I also was reminded of a recent email from Rick Boettger, above, a sometimes partner in paradise political insurgency, responding to the America's top gangster lives in the White House post at this blog.

A few years ago, Rick filed an ethics complaint against the lower keys county commissioner (Republican) I ran against twice as an Independent. The Florida Ethics Commission agreed with some of Rick's complaint, including the commissioner had failed to report in his required finance reports that his membership at the Marathon golf club was being comped by the golf club.

This year, Rick announced he is running for the Key West county commission seat held by a several-term incumbent (Democrat).
Excerpts from Rick's email:

Thanks for the link to the New Yorker story about the upcoming book on the Steele dossier.  Every quote from him convinces me he really is a senior spy at the level above anything we have in the CIA, and the dossier is remarkably prescient and legitimate. (I had a Top Secret clearance when I was in the Army Security Agency, so I have a little more authority to opine on this than most do.)

Keep up your daily posts, Sloan. I suggest you treat your new readers to a report about the most famous Hometown event ever, having your beauteous female friend ride by--you describe her attire--in support of your Nude Beach agenda.

I also suggest that if you choose to report any of this, you write it in your own words, your hyper-fluency does not need me help.  But I also know and respect your right to report anything you receive as you wish.

Excerpts from my reply, which included Sloan politics in paradise art:

Both congratulations and condolences for running for the county commission seat. Since moving back to Alabama, I slowly but inexorably drifted away from being involved in and publishing about paradise. My blog doesn't get much traffic when I do publish something, and, as you see, I'm presently writing about national politics - the unreality show of shows.

I thought before I moved back to Alabama in late 2018 that County Commissioner Heather Carruthers might run for term-limited Florida House of Representatives Holly Raschein's seat, but that might be tough to win for Key West Democrat in a Trump-Republican controlled South Florida/Florida Keys voting district? Also, I was hearing term-limited Key West Mayor Craig Cates might run for Holly's seat. Now I understand he was appointed by the governor to finish out the term of County Commissioner Danny Kohlage, who resigned last year.

My sense all along was Heather and now Key West Mayor Teri Johnston's roles in founding, leading and promoting FIRM (Fair Insurance Rates Monroe), and FIRM holding something of a lid on rising property insurance rates made them unbeatable in Monroe County elections, and there also are their many local fans. However, Heather is a politician and you are not. I think the commission would be a tad more interesting with you on it. That might scare the shit out of some folks, make other folks happy.

Perhaps you would have more of a chance running as a Republican? Dennis Ward got back into the State Attorney office after switching from Democrat to Republican. In 2008, Carlos Rojos announced as a Democrat for the county commission seat held by a several-term Republican commissioner who before that had served several Key West mayor terms. Heather entered that commission race as a Democrat, and I entered as an Independent. Rojos beat the incumbent commissioner in the Republican primary, and came in second to Heather in the general election. I came in 3rd.

My claim to fame in that race was the attached Sloan Quixote editorial cartoon in the Key West Citizen. [All art attachments in my email to Rick are reproduced at the bottom of this post.] That came about from Hometown's chairman, Todd German, asking the candidates a question from the audience: What do we perceive to be the three greatest threats facing the Florida Keys? I was the last candidate to answer. After the other candidates said what they thought, I was seized to say, "The Gang of Three." Three county commissioners  who seemed to be controlled by their friends and developers and had been so nicknamed. Todd asked me to repeat what I'd said, because he didn't think the audience heard me. So I said again, "The Gang of Three." Two of the gang were voted out of office that year. When the third gang member came up for reelection 2 years later, he was voted out.

The nude beach mayor campaign was a lark. For years, I was blamed for putting the buxom lass up to springing forth topless on her bicycle in the middle of newcomer Key West mayor candidate Craig Cates' very first political speech, hollering, "Nude Beaches for Key West!!! Sloan for mayor!!!" The lass really did it on her own, it was her idea. She liked being naked on beaches. She had friends that did, too. I called her, "Aphrodite", in my blog posts. I did not do a nude beach outing with her.

Aphrodite came back, shortly, with her halter top back in place. She was swarmed by men attending the event. Including the sheriff and other elected males. Mark Howell, who worked at the Key West Citizen, had photoed her topless on her bicycle when she interrupted everything. The photo was on the front page of the next day's Citizen. Something like, "The most sought after photo in Key West." Mark and the Citizen management caught hell from the owners. I thought it was a howl.

Also attached are some photos of my cheeky campaign T-shirt that year [reproduced at the bottom of this post]. The pic of the naked damsel from behind is my soul drawing of Aphrodite, which was on the back of the T-shirt. I had no personal interest in a nude beach, but I was convinced it would draw an entirely new kind of touri$t horde to Key West. I figured I ought to get a Pulitzer for that "There no fig leaves in paradise" campaign. I think I got about 120 votes.

I suppose the most brazen of my 6 Key West mayor campaigns was 2018, which I kicked off at Hometown's call to candidates by saying, "Everyone knows Key West is an open-air insane asylum and I'm the head lunatic, so why not make it official? Sloan for Mayor!!!" The Hometown audience seemed to really like it. I got 53 votes, I think.

I ran three times for county commission, twice when I lived on Little Torch Key. My recurring campaign mantra was, "The Florida Keys are way over-developed and there is not a person living here who can look in a mirror and honestly argue otherwise." Nearly everyone in the Florida Keys claimed to be an environmentalist. I got 1/3 of the votes in 2006, and 1/4th of the votes in 2010.

Meanwhile, you were really bunged up in the bicycle wreck. Have you recovered sufficiently to put all that you have into a run for county commission? Is your better half up to you doing it? Do you really want to be a county commissioner?

Do you have a campaign website blog? if not, I think you need one, on which you publish something daily that is relevant to the Florida Keys and its beleaguered environment and its really diverse citizenry, especially the less financially fortunate citizens for whom living in paradise is a day to day and week to week and month to month and year to year financial struggle.

You need to have at the end of every blog post the candidate campaign disclosure required by Florida law.

Perhaps our friends at the blue paper will publicize your campaign website blog. Perhaps other media outlets will, too. Get on local talk radio and promote the website blog. Buy talking space on bigpinekey.com's popular Coconut Telegraph public forum.

I was moved to buy a rubber chicken and a cheap yellow rain suit to wear and talk to the rubber chicken at a Hometown 2016 Key West mayor's race forum, after the incumbent won the primary without a runoff but had to face write-in candidate me in the general election and declined to participate in the forum. That was the only mayor race I ran as a write-in. I was broke, couldn't afford the filing fee and was too lazy to get enough voter petitions signed to qualify in that way.

I took a telephone call from God at a Hometown candidate forum during the 2018 mayor's race. I heard the call went viral, internationally. I got maybe 53 votes?

Along the way were other attached memorable art outings [reproduced at the bottom of this post].

A shaman mask and a dress worn to a women's night out meet the candidates event.

I slept on a bench a bunch of nights in the front lobby of the Key West police station. 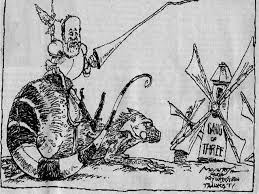 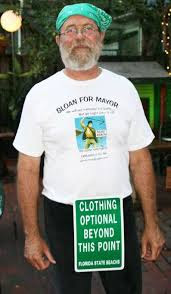 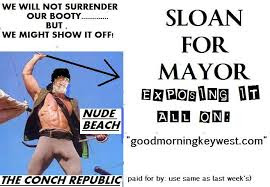 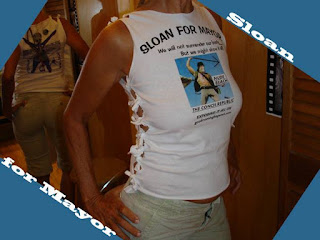 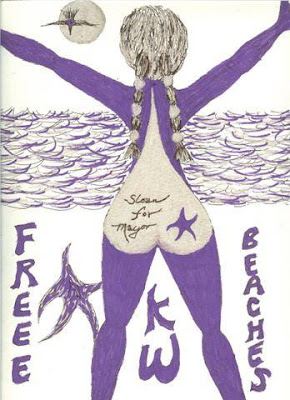 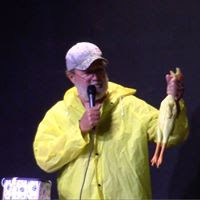 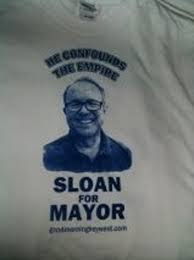 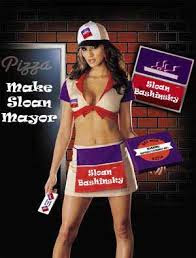 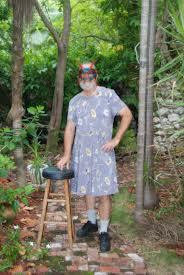 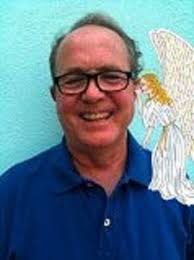 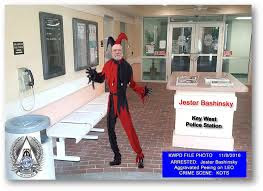 sloanbashinsky@yahoo.com
Posted by Sloan at 7:22 PM