It appears more reds wish to be Typhoid Mary suicide bombers, than blues 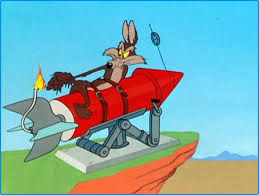 From a friend with severe medical issues that caused her to choose not to be vaccinated against SARS CO V-2:

When Did Moderna Know About COVID-19?

Was the public kept in the dark until a drug company could set itself up to make maximum profits? 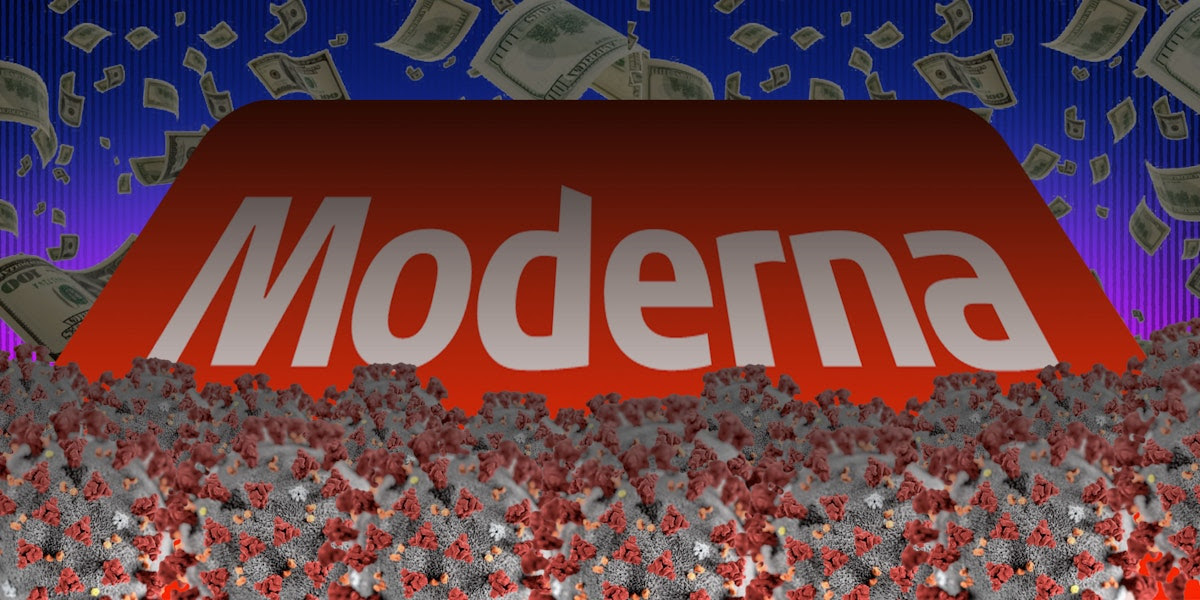 If a report disseminated by a UK website called The Daily Expose is accurate, the world may have a major scandal on its hands.

"A confidentiality agreement shows potential coronavirus vaccine candidates were transferred from Moderna to the University of North Carolina in 2019, nineteen days prior to the emergence of the alleged Covid-19 causing virus in Wuhan, China," the website reports.

The Expose produced the agreement itself, which can be viewed here. Page 105 is titled "Material Transfer Agreement" between the providers, named as the National Institute of Allergy and Infectious Diseases, National Institutes of Health ("NIAID") and Moderna TX Inc. ("Moderna"), and the recipient is named as the University of North Carolina at Chapel Hill. The agreement states the providers will give the university "mRNA coronavirus vaccine candidates developed and jointly owned by the NIAID and Moderna."

The agreement further states the research material may not be used on human subjects or used for "commercial purposes such as screening, production or sale, for which a commercialization license may be required." The recipients who signed the agreement are Professor Ralph Baric, PhD, and Jaqueline Quay, Director of Licensing & Innovation Support, OTC. The providers are NIAID investigator Barney Graham, MD, PhD; technology transfer specialist Amy Petrik, PhD; Moderna investigator Sunny Himansu, PhD; and Moderna Deputy General Counsel Shaun Ryan. The dates accompanying the recipients' signatures are December 12, 2019, and December 16, 2019, respectively. The dates under the providers' first two signatures remain blank, while the second two are both dated December 17, 2019.

"All of these signatures were made prior to any knowledge of the alleged emergence of the novel coronavirus," The Daily Expose reminds us. "It wasn't until December 31st 2019 that the World Health Organisation (WHO) became aware of an alleged cluster of viral pneumonia cases in Wuhan, China. But even at this point they had not determined that an alleged new coronavirus was to blame, instead stating the pneumonia was of 'unknown cause.'"

The senior author of that paper? The same Dr. Ralph Baric who signed the transfer agreement — and the same Dr. Baric who worked with Dr. Shi Zhengli, a.k.a. "bat lady," at the Wuhan Institute of Virology (WIV) on coronavirus gain-of-function research.

A timeline of the pandemic provided by the World Health Organization (WHO) reveals that it requested information "on the reported cluster of atypical pneumonia cases in Wuhan from the Chinese authorities" on January 1. However, it took until January 9 before WHO revealed that "Chinese authorities have determined that the outbreak is caused by a novel coronavirus."

Thus, the question becomes obvious: Why was an mRNA vaccine developed by Moderna transferred to the University of North Carolina at Chapel Hill nearly a month earlier?

A 2018 article published by CNBC might provide a clue. It reveals that "Wall Street newcomer" Moderna took a beating on its initial public offering, falling nearly 20%. Nonetheless, self-anointed stock guru Jim Cramer remained optimistic. "It's got an exciting concept; you can argue that messenger-RNA-based medicine could revolutionize health care," he asserted.

Three years later, the company has generated $1.94 billion in revenue during the first quarter. Its COVID-19 vaccine generated $1.73 billion of that revenue, and the company predicts the vaccine will generate $19.2 billion in revenue by year's end. "Twelve months ago in Q1 2020, Moderna had never run a phase 3 clinical study, never got a product authorized by a regulator, and never made 100 million doses in a single quarter," boasted company CEO Stéphane Bancel. "I am very proud of what the Moderna team has achieved."

Americans might less enthused. For more than a year, anyone who even suggested COVID-19 originated anywhere other than nature was dismissed as a conspiracy theorist. Will those same howls of derision be aimed at anyone who dares to wonder why the development of a vaccine for a virus preceded public knowledge of that virus?

Still more "curious"? A cancer study published in November 2019 revealed the presence of SARS-CoV-2 RBD-specific antibodies in 11.6% of its patients. Since antibodies take time to develop, it's possible some patients had active infections as early as August 2019. "This study shows an unexpected very early circulation of SARS-CoV-2 among asymptomatic individuals in Italy several months before the first patient was identified, and clarifies the onset and spread of the coronavirus disease 2019 (COVID-19) pandemic," it stated. "Finding SARS-CoV-2 antibodies in asymptomatic people before the COVID-19 outbreak in Italy may reshape the history of pandemic."

Unless history is obliterated by propaganda. It is no secret that an increasingly authoritarian Biden administration and its media echo chamber are all in on getting every American vaccinated, whether they want it or not. It is also no secret that those who even dare to suggest there are viable alternatives to the vaccines — alternatives that would abrogate the "emergency use authorization" under which all vaccines are being administered — are being dismissed as quacks and/or demonetized.

Yet reality continues to intrude. According to the Vaccine Adverse Events Reporting System (VAERS), as of July 7, 2021, there have been a reported 438,440 adverse reactions to vaccines, including 9,048 deaths. And while the media remain determined to frame vaccine resistance in terms of "enlightened" blue states vs. "backward" red states, the Kaiser Family Foundation reveals that as of July 8, the two cohorts with the lowest vaccination rates nationwide are blacks (34%) and Hispanics (39%). By contrast, 47% of whites and 62% of Asians have been vaccinated.

At the very least, the above data elicit concern, and also reveal that millions of Americans remain highly skeptical of what they are being told. That skepticism will undoubtedly be amplified by the latest revelation that the Johnson & Johnson vaccine will have a new warning added to its label noting that the shot is linked to a "rare side effect" known as Guillain-Barré syndrome, a malady that occurs when the immune system attacks the body's nerves.

Yet that skepticism will pale by comparison to the disgust and anger Americans will feel if it turns out the public was kept in the dark about a deadly virus until a large drug company could set itself up to make maximum profits.

The Daily Expose wonders if the National Institute of Allergy and Infectious Diseases would like to explain itself in a court of law. As for an American public subjected to more than a year of often dubious admonitions to "follow the science" — even when that science and the censorship it engendered "evolved" 180 degrees away from its original proclamations — perhaps one of the oldest and most cynical explanations of all is far more apropos:

I replied to the friend:

I had a number of interactions with The Patriot Post readers last year, and learned they were a white ultra conservative club, who booked no disagreement with their views and pronouncements.
That said, I doubt the public will ever know what really happened to spawn SARS CO V-2, because the people involved don't want the public to know, and I welcome any source that digs into that murky toxic swamp, to which Facebook censors seem 100 percent allergic.
I think American intelligence services and President Trump knew generally what had happened, and President Biden knows, and neither man has had the balls to tell the public what they know.
I don't see how any fast-tracked vaccine does not contain unexpected "gotchas" that show up sooner and later. Yet, since the wise folks who could have made a difference, and the idiots who could have made a difference, and the spineless who could have made a difference rejected Dr. Zelenko and his cheap fast early stage infection cure, which spared SARS CO V-2 victims from hospitals and M*A*S*H Deux medicine, it looks to me that vaccines became an unavoidable evil, unless America and the world were willing to gamble on just letting SARS CO V-2 wash over their populations and the fittest survived and the rest ended up dead or permanently damaged and a monstrous financial, medical and emotional strain on government and private sectors.
I think this from the article you referenced is an example of how The Patriot Post ignores or intentionally spins and propagandizes:

"the Kaiser Family Foundation reveals that as of July 8, the two cohorts with the lowest vaccination rates nationwide are blacks (34%) and Hispanics (39%). By contrast, 47% of whites and 62% of Asians have been vaccinated"

Since America still is predominantly white people, let's look at the statistics for white Americans who got, or didn't get, vaccinated. More precisely, let's look at the statistics of what percentage of reds and blues got vaccinated.
I found this Kaiser report quickly online, which I imagine any other idiot also could have found. It appears more reds wish to be Typhoid Mary suicide bombers, than blues.

One of the main factors driving differences in COVID-19 vaccination rates across the country is partisanship. Our surveys consistently find that Democrats are much more likely to report having been vaccinated than Republicans, and Republicans are much more likely to say that they definitely do not want to get vaccinated.  In May, just as vaccine supply was starting to outstrip demand, we examined average vaccination rates by county and found that rates were lower in counties that voted for Trump in the 2020 Presidential election compared to those that voted for Biden. Now, two months later, we find that not only does this remain the case, the gap has grown.
We obtained data on the share of the population fully vaccinated by county from the Centers for Disease Control and Prevention’s (CDC) COVID-19 Integrated County View and data on the 2020 Presidential election results by county from here (for more detailed methods, see: https://www.kff.org/coronavirus-covid-19/issue-brief/vaccination-is-local-covid-19-vaccination-rates-vary-by-county-and-key-characteristics/).  To create a longer time series, we also looked at vaccination rates in April 2021.

While the share of the total population that is fully vaccinated has increased for both county groups, it has increased faster in counties that voted for Biden, resulting in a widening gap.  Three months ago, as of April 22, the average vaccination rate in counties that voted for Trump was 20.6% compared to 22.8% in Biden counties, yielding a relatively small gap of 2.2 percentage points.  By May 11, the gap had increased to 6.5% and by July 6, 11.7%, with the average vaccination rate in Trump counties at 35% compared to 46.7% in Biden counties. See Figures 1 and 2. 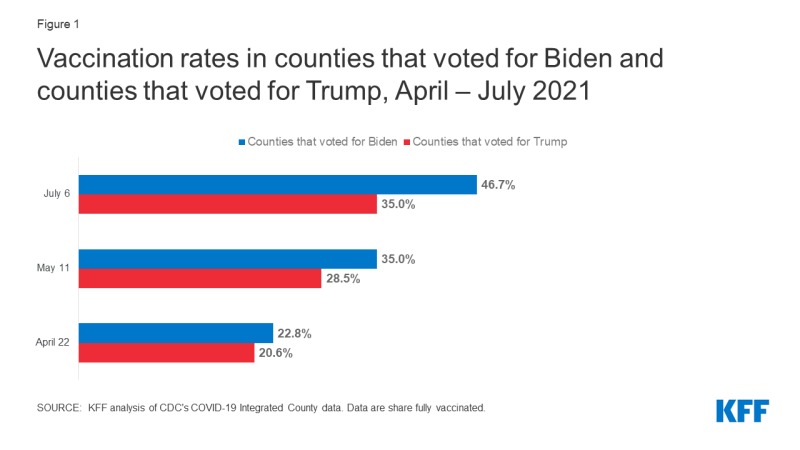 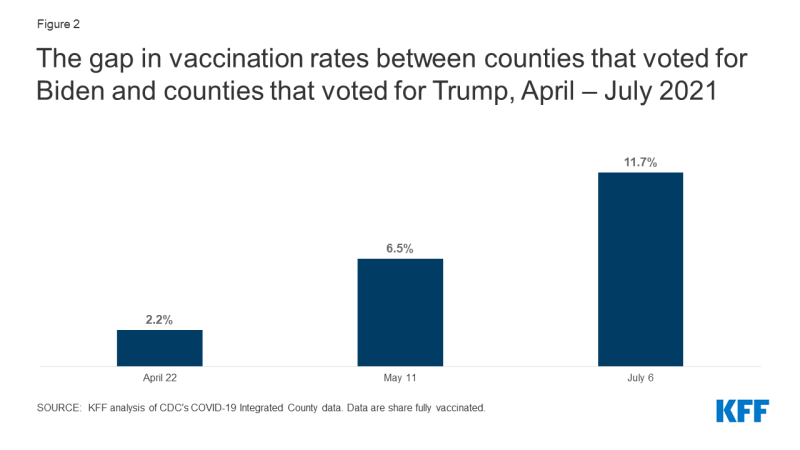 Although there has been an overall significant slow-down in COVID-19 vaccination rates in the U.S., these findings show a widening divide of communities at risk for COVID-19 along partisan lines. A key component of any effort to boost vaccination rates among Republicans will be identifying the right messengers. According to our Vaccine Monitor, which tracks the public’s attitudes and experiences with COVID-19 vaccinations, Republicans are most likely to trust their doctors and employers to provide reliable information on COVID-19 vaccines, while government sources are less trusted.  Going forward, efforts that focus on these messengers, including President Biden’s recent announcement to augment vaccination distribution through doctor’s offices, may help, but there is a hardcore group of vaccine resisters who are disproportionately Republican and will be difficult to move.