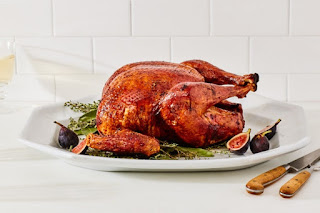 Thankful not a turkey, defying covid gods me drove to Mississippi yesterday to spend time with my older daughter and her family. Highways were busy but not clogged.

After settling in at my daughter's home, I went online and found this from a Republican friend who calls Donald Trump the Orange Turd.

Maybe so many people are still getting covid because the Orange Turd and his lemmings and judges don't wear facemasks and hold large gatherings?

CDC chief says coronavirus cases may be 10 times higher than reported
I imagine the planet is thankful for the breather provided by the coronavirus, which was manufactured in Red China. There was supposed to be a vaccine, and Red China intended to use both to hold the rest of the world hostage. Am thankful an angel did something that let the virus escape before Red China had the vaccine.
Am thankful Dr. Vladimir Zelenko developed an early stage cure, which he explained in a March 23, 2020 letter to President Trump, and am not thankful President Trump did not see to it that the cure was made available to all Americans.

Been thinking about Native Americans, who seem to have come out far worse off than African and other non-white Americans. This heart-wrencher was in my newsfeed today:

Tribe Who Fed the Pilgrims Strives for Survival Amid New Epidemic

Am thankful for getting even closer to my daughters and their families after many years apart.

For having enough money not to live on the street, in homeless shelters, friends' homes, etc., as I did off and on from 2000-2017.

For having better bowel function than I've had for decades, and that angels still steer and direct me.

For receiving all the necessary examinations and advice from very good doctors re my prostate cancer, and having access to a retired oncologist, who gives me his perspective. I told him that I am a mystic, literally, and I do not view life and death the way most people do. Am thankful I can think about how I wish to proceed: surgery, radiation, not seek any treatment, if that is my decision.

For having a dozen, or more, different lives in just this one lifetime - some fairly mainstream, the rest not in the least mainstream. A lot about that can be read on this blog, more was written on other blogs no longer in existence. Some of it can be read at my Facebook page and groups I started. Some of it can be read in A SOUTHERN LAWYER WHO BECAME A MYSTIC, available at Amazon in paperback and kindle. A trilogy. I put all three parts on their own separate blogs, which can be read for free. Here's a link to the first part of the trilogy, which has links at the end to the other two parts: afewremarkablealabamapeople.com.

Been worrying plenty about three friends, who have very little money. Two have horrific medical troubles. The third has had awful medical troubles, is homeless and spends lots of time in the Key West jail for being homeless. There now, she reported yesterday there are 50-plus covid infections in the men's side of the jail and in people who work there. All new inmates are put in quarantine for 2 weeks. The jail takes $20, I think, out of any money inmates have when they are brought in, and takes $1 a day from money put by outsiders into inmates' commissary accounts. Am thankful I'm not in that jail, or in any jail, for being homeless, or for any other reason.

Am not thankful for the social, religious, emotional civil war I see raging in America.

The far-ranging, deep, arduous angel training I had, still receive, seems to have made very little difference. I wonder if the point of it all was simply to help me?

My beleaguered friend, who frequently reports being told and shown things by angels, texted two days ago:

Michael said in a dream:

After Biden is sworn in, the only thing that will reign supreme in America is Chaos.

In worst dream ever, I saw a movie:

In effort to show up Trump, Biden announces that due to the increase in COVID, he wants transition power to shut down country over three weeks leading up to inauguration and a national day of testing. The vaccine rollout after Thanksgiving goes badly as well. Many people die, develop Covid, horrible unforeseen reactions. People fight to get vaccine, then fight to avoid it. Due toa ll that, after Biden's announcement of national day of mandatory testing, people start asking how a president could be recalled? Biden announces rollback on China tariffs and declares them no threat to jobs or security of USA. After he hugs Xi Jingping on camera, China announces hostility with Australia, saying that Australia needs to take back what they said about needing to investigate COVID as a bioweapon and needs to allow china access to AU waters. Biden announces that he supports China. Pelosi says she will not discuss a bill to recall the Executive in Chief. Biden and Harris Beto as gun czar as part of transition. Beto announces list of initial 25 weapons that will be confiscated, you get $250/$400- that you can write off on taxes, announces all FFL(dealers) must turn in their dealer transfer log books (which contains all guns sold not just the 25 to be seized). NRA, bloggers, internet forums arrange and armed March on Washington. Beto list of 25 isn't just KDs, ARs. but pumps, semiautomatic skeet shotguns and ANY gun used in war or replicas thereof. Antifa and similar groups announce March on Washington, DC, proBeto. Dream ended in chaos.