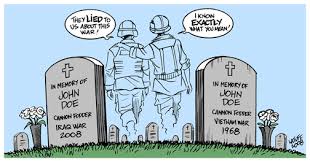 As people honored Veterans Day yesterday, I thought about that "cartoon".

I recalled being asked in my sleep the night of Sept 8-9, 2001, "Will you make a prayer for a divine intervention for all of humanity?" I woke up, wondered what that was about, made the prayer, went back to sleep.

On 9/11, my concern was America would get into another foreign war, another Vietnam. It did not occur to me that America might get into two Vietnams. Afghanistan and Iraq.

A few days after 9/11, as I was walking out of a US Post Office, I felt the presence of angels, heard, "America needs to get out of the Middle East altogether."

Flash forward to the night of Sept 8-9, 2002. I was asked in my sleep, "Will you make a prayer for a divine intervention for all of humanity?", but that time I made the prayer in my sleep and added to it, "and let it begin in me!"
Already I had been forced by angels through several courses in mirrors. A new course in mirrors began. There were later courses in mirrors.
In the Gospels, Jesus advised first taking the beam out of our own eye.
I give Donald Trump credit for not getting America into another foreign war, and I give Red China and the coronavirus credit for stopping most shooting wars and giving Mother Nature a breather.
It looks to me that Donald Trump showed Americans, and the world, just how deeply divided America is, a different kind of war.
I wondered last night, and again this morning, if America and humanity have Red China and the coronavirus to thank for Donald Trump being derailed?
I wondered for several days if the Democrats and the mainstream media will stop lamenting the vote counting and recounting, and simply be patient and let it happen? Every vote needs to be counted, every recount needs to be completed.
I wonder right now if Republicans and Democrats will see that they share responsibility for America being where it is today? I wonder if they will change?
sloanbashinsky@yahoo.com
Posted by Sloan at 11:18 AM