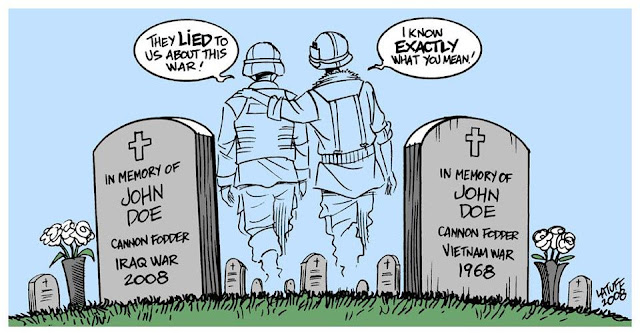 I found myself thinking yesterday that it's ironic that the coronavirus, which was manufactured in a Red China bioweapon lab, seems to have pretty much stopped shooting wars on this planet, for now. I suppose the combatants don't want to catch the coronavirus? I wonder how that has affected the American military industrial complex's bottom line? I wonder how that sits with President Trump, Republicans and MAGAs, who don't like facemasks, social distancing, shutting down public activities? I wonder if America should be thanking Red China for shooting wars stopping, for a while? And for its  bioweapon putting America on the brink of civil war?

The only shooting war in which I nearly fought was Vietnam. That war ramped up after I entered law school in the September 1965. I was married since July 1964. After U.S. escalation of the Vietnam war, married men and students were not drafted. While I was in law school, married men became subject to the draft and students were allowed to finish their course of study in exchange for being inducted upon graduation.

My wife got pregnant and gave birth to a baby boy in July 1967. Fathers were not and never were drafted. Our son died of sudden death syndrome at seven weeks old. I wrestled with doing nothing, enlisting in the U.S. Marine Corps, and taking a student deferment at my Draft Board, in Birmingham, which would ensure my induction on graduation from law school. Finally, I drove to the Draft Board in Birmingham and took the student deferment.

About two weeks later, my wife learned she was pregnant. I drove back to the Draft Board and told the lady clerk, who had taken my student deferment application, what had happened. She said the student deferment election was irrevocable, there was nothing that could be done. She walked over to a bank of green file cabinets, opened one, pulled out a file, mine, said she would show me what I had signed. She look in the file, said there was a mistake. I asked, what mistake? You signed the wrong form, you will have to apply again for a student deferment, she said. I said no thanks, I will keep my father deferment, I left, feeling the weight of the world lifted off me. I knew God has saved me from Vietnam.

In 2010, I learned through a series of curious events that the woman at the Draft Board had done that numerous times to save young Birmingham men from going to Vietnam. I wonder right now if those were young white men? Or did she also do it for young black men?

Back in 2000, I met and got into relationship with an Ohio woman, who had attended Kent State University and was one of the students fired upon by the Ohio National Guard for protesting the Vietnam war. She said she and other students were sitting on the ground protesting, when the Guardsmen opened fire. She and the other students jumped up and ran away, the Guardsmen chasing them and firing. The fleeing students veered right, she veered left. The Guardsmen followed the other students, firing. She escaped. Soon, she was carrying explosives in her day pack for the Kent State Weathermen cell. After a while of that, she decided it wasn't right and she stopped doing it. She remained deeply spooked by guns and police.

Back in 1988, I attended a Birmingham Downtown Rotary Club luncheon with my father. The featured speaker was the Executive Director of the National Geographic. His topic was "Getting to know our neighbors." He said studies had shown that 95 (thereabouts) percent of college students could not locate Vietnam on a map. The Geographic felt that students learning about people living in other countries might create understanding and help countries get along better.

After he finished speaking, the Geographic representative asked if there were any questions? A man in the audience asked, what was the Geographic's position on the Vietnam war? The speaker said the Geographic had correspondents in Saigon during a massive street demonstration of Vietnamese people carrying posters begging America to help them. That demonstration was broadcast on American TV news. The correspondents talked with demonstrators and learned they did not speak English, did now know what was on the posters they carried, or why they were there, other than they had been paid money to do it, and had been brought there by the South Vietnamese Government.

You could have heard a pin drop in the Rotary luncheon. My father, a WW II combat aviator veteran, looked like he wanted to throw up. He had not cared for the Vietnam war and had used his influence to get my younger brother a Birmingham Air National Guard deferment.  Prominent Texas man George Bush had a son who got into the Montgomery, Alabama Air National Guard, from which he went AWOL and was not prosecuted.

In early 2005, I got to know a Key West fellow, who was a chess wizard. He told me, that when he was 18, he declined to fight in Vietnam and was put in a federal prison for 3 years. He was from a white family of moderate means.

In the spring of 2005, I attended a weekly Seekers Group meeting in the Unity Church of Key West. Perhaps 10 people, including the church's interim minister, who was from Tuscaloosa, Alabama, sat around and talked about this and that. A fellow somewhat older than me said one day that he had worked for the CIA and was stationed in South Vietnam while the French were trying to retake Vietnam, which they had lost to the Japanese during World War II. His group's mission was to try to help the Vietnamese beat the French, because the American Government wanted to replace the French in Vietnam, because of it's natural resources, especially rubber plantations. He said, outwardly the America Government was supporting the French.

I looked for reactions in the other group members and saw no reactions. I asked them if they had heard what he had said? It was as if they were in a trance or asleep, and the only two people here were me and the man who told the story.

It was maybe ten years later that I started ruminating that President Kennedy was reluctant about expanding America's presence in Vietnam, and he was assassinated. Muhammed Ali refused to fight in in Vietnam, because he had no beef with the Vietnamese people, they never shot at him, called him a nigger, and he was put in  prison. Martin Luther King came out against the Vietnam war as a rich white men's war, and he was assassinated.

President Obama, the first and only black president, so far, was supposed to get America out of the wars in Afghanistan and Iraq, but instead he accepted the Nobel Peach Prize.

Vice-President Joe Biden and Secretaries of State Hillary Clinton and State John Kerry, a decorated U.S. Navy Vietnam combat vet, who eventually protested against that war, did not clamor for America to get out of Afghanistan and Iraq.

Donald Trump, who had had received several Vietnam war deferments for a bone spur in one of his feet, which one, he cannot remember, criticized the Afghanistan and Iraq wars, but after he became president, he said the natural resources of Afghanistan and Iraq should be monetized to repay America for those wars. A hard-right conservative Norwegian parliamentarian twice nominated President Trump for the Nobel Peace Prize.

Red China, hardly a dove in the Tom Clancy American war heroes novels, nor a dove in any other setting, developed a bioweapon that stopped wars, for now.

But will the coronavirus prevent an American civil war caused by the election tomorrow?

Looks to me that civil war is well underway, and only lacking, for now, is the shooting.

The United States of America are no more, and Red China, Russia, Iran, radical Islam, etc. are delighted.